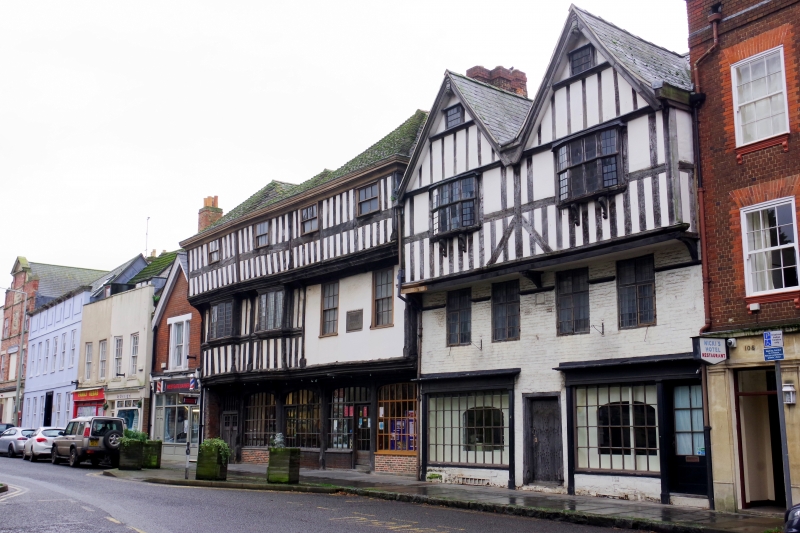 Town house, later shop, now museum. c1645, for Damaris
Deighton, daughter of a surgeon, John Deighton, C18 and C19
alterations and additions; from 1950 to 1978 the Museum of the
Gloucestershire Regiment; restored 1968-72 for Gloucester City
Council, now forms part of Folk Museum. Brick, stone, timber
frame, slate roof with end-gables and cross-gabled dormers,
two end-gable brick stacks. A lateral range of two bays with
central entry, and parallel gable-ended ranges at right angles
to street.
EXTERIOR: three storeys, cellar and attic; on the ground and
first floors the front wall of the range of brick, the rear
wall of stone with brick above, the third floor timber-framed
with jetties and two cross gables to front and rear.
Symmetrical front, on the ground floor in the centre a central
doorway in a finely moulded timber frame with original, iron
studded, oak plank door; to right a early C19 shop-front, the
window and doorway to right framed with timber pilasters and
corniced fascia, and C20 glazing bars inserted; to left a
similar C20 window inserted; on the first floor four
timber-framed casements each of two lights with upper transoms
and leaded rectangular glazing, under the second floor jetty a
knee bracket at each end and in the centre; on the second
floor timber-framing in two bays (concealed by rendering prior
to 1968) with close studding, intermediate rail and tension
braces to the central storey post, in each bay a canted,
timber-framed, oriel casement window supported on two shaped
brackets, each casement of four-lights with upper transom and
leaded rectangular glazing; each gable has timber studs in the
apex and a fixed sash with leaded glazing, both gables with
plain barge boards and apex finials.
INTERIOR: on the ground floor the former central cross passage
is indicated by morticed beams, at the east end a fireplace
with Tudor-arched and moulded stone surround, the similar
fireplace at west end removed in C19, on each of the upper
floors similar fireplaces at each end; a newel stair flanking

the south side of each chimney-stack, in brick to the cellar
and with oak newel post, oak steps, and curved and moulded oak
hand rail to the upper floors and attic; on the second floor
the exposed tie beam to the central roof truss is supported on
curved, moulded brackets at either end; in the attic the roof
framing comprises the central truss with queen struts and
collar tie at the apex, purlins tennoned into the sides of the
principal rafters and rafters tennoned into the purlins and a
square ridge piece.
The timber-framing on the second floor and in the cross gables
was originally concealed by render with scribed masonry
joints; the render removed in 1993.
(Cox N: Gloucester Folk Museum, A Guide to the Buildings:
Gloucester: 1987-: 20).