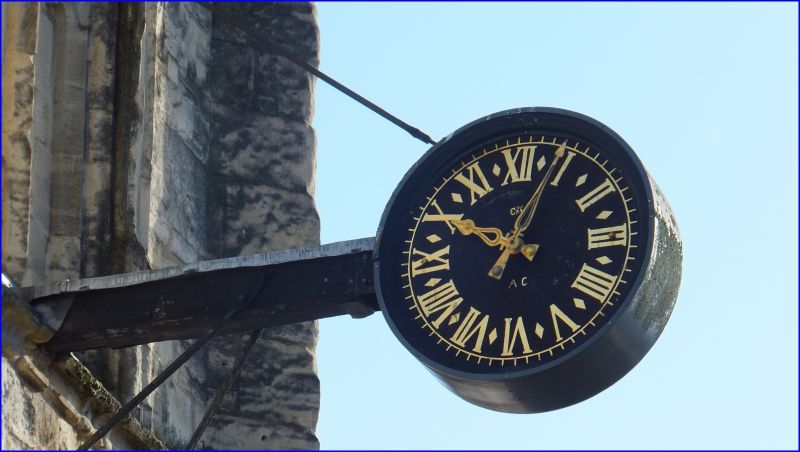 Parish church, redundant since 1971. The early C12 church
largely rebuilt in C13 retaining some features; C14
alterations, early to mid C15 alterations and west tower and
spire added, north-east vestry extended in C16 and C17; the
spire reduced in height and capped 1783 by John Bryan;
restored 1865 by John Jaques and Son, repaired following a
fire 1901, the west tower stabilized 1927, the north aisle
rebuilt and the church re-roofed 1935-38. Vested in the
Redundant Churches Fund 1975 and programme of repairs
commenced. Limestone ashlar, stone rubble, gabled slate roofs.
PLAN: imposing west tower and spire, nave of six bays, on the
south side of the nave towards the west end a deep porch with
an upper room, from the third to the sixth bays and against
the first bay of the chancel a wide south aisle with a small
porch to the priest's door towards the east end; on the north
side a porch against the side of the west tower and from the
first to fifth bays of the nave an aisle with a wider
transeptal chapel off the east bay of the nave; two-bay
chancel continuous with the nave, with a vestry on the north
side.
EXTERIOR: mid C15 west tower of three stages defined by
moulded string courses, diagonal corner buttresses with
offsets rising to the top of the second stage and small
panelled buttresses to the third stage, an embattled parapet
with pierced tracery panels and corner pinnacles, restored
1993-4; in the first stage of the tower in each outer face a
tall three-light window with hoodmould, in the second in each
face a three-light window with upper transom and ogee arched
head with flanking crocketed pinnacles, and in the third stage
in each face a two-light arched window flanked by arched
niches, all under crocketed ogee gablets with flanking
pinnacles, all the windows with Perpendicular tracery; inset
on the tower an octagonal, stone spire with a pinnacle
attached to each diagonal face and on each cardinal face a
two-light lucarne under a tall ogee crocketed gablet, the apex
of the spire removed above a pinnacle coronet and replaced by
a lead ogee cap with ball finial; fixed onto the south side of
the tower in 1716 a large bracket clock.
On the south side of nave the gabled south porch with upper
room, added 1347 and rebuilt mid C19, with arched entrance

doorway and iron gates; within the porch the C12 arched
doorway with nook shafts and tympanum carved in relief with an
Agnus Dei and foliage. The five bays of the end-gabled south
side of the nave defined by buttresses with two offsets rising
to the underside of a continuous corbel table, and in each bay
a large three-light window in a C13 opening, the moulded
shafts to the jambs with moulded capitals and bases, and with
a moulded semicircular arched head; in C15 the windows
remodelled and Perpendicular tracery inserted, in C19 the
window in the west bay restored to C13 design, a similar C13
window in the east end of the aisle is infilled with C14
Decorated tracery. In the north aisle C14 and C16 windows; in
the gabled east wall of the chancel a C15 five-light window
with Perpendicular tracery.
INTERIOR: within the tower a lierne vault, and above in the
belfrey stage a C15 timber bell frame. In the north arcade of
the nave the west bay has a pointed arch, the next two bays
are early C12 with thick cylindrical columns and round arches,
and the three eastern bays are early C13 with pointed arches
on cylindrical columns, the two eastern columns with
stiff-leaf capitals, the four-bay south arcade also early C13
and has cylindrical columns with stiff-leaf capitals; over the
nave a C19 open timber roof of five bays with four king-post
trusses and an arch braced truss between nave and chancel, the
trusses supported on carved stone corbels; in the chancel in
the north and south walls early C16 squints inserted for
viewing the altar from the aisles, in the south wall a large
piscina and credence, and encaustic tile paving.
FITTINGS: include at the east end of the south aisle the
richly moulded, panelled timber front of the former west
gallery installed in 1621 and removed in 1924 from within the
lower stage of the tower; above the south doorway the arms of
Charles II, otherwise C19 fittings.
MONUMENTS: include at the east end of the south aisle chest
tomb with robustly sculpted and coloured effigies of Alderman
John Walton and wife, d.1626, the front of the chest with two
kneeling figures framed in arched panels set behind and pairs
of Ionic columns, restored 1980: in the chancel a half length
portrait effigy of Revd. Richard Green, d.1711, in academic
dress; many memorial tablets and ledgers. The decorative C14
bronze closing ring formerly on the south door is now in the
Gloucester City Museum.
(BOE: Verey D: Gloucestershire: The Vale and the Forest of
Dean: London: 1976-: 236; VCH: The City of Gloucester: Oxford:
1988-: 309-310).