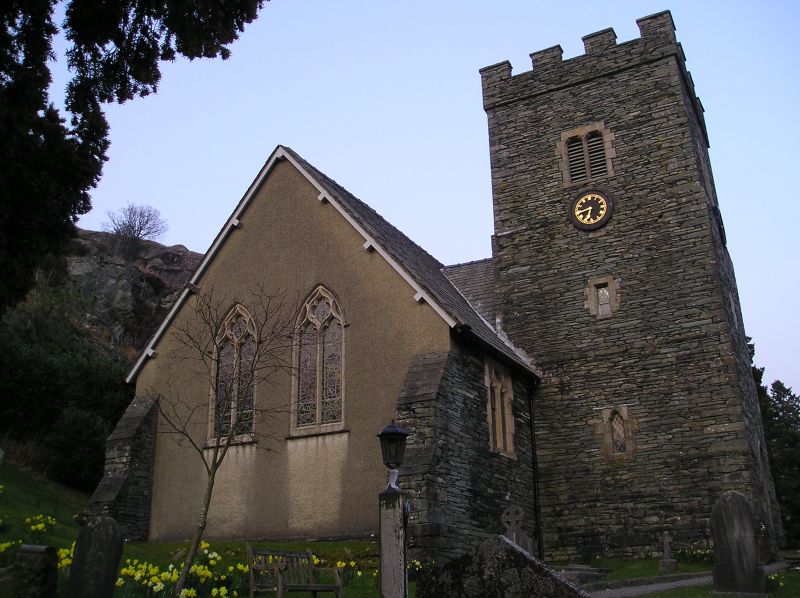 EXTERIOR: The church is mainly in Decorated style with an asymmetrical accent provided by the stout 3-stage south tower, incorporating the porch in its lower stage. It is unbuttressed and the upper stages are progressively narrower, beneath an embattled crown. The porch has a south doorway with continuous double chamfer, and cusped west window. In the second stage are small narrow windows and the upper stage has 2-light shoulder-headed openings with louvres. The nave west front has two 2-light windows and deep angle buttresses. South windows are square-headed with ogee-headed lights, comprising one 2-light window left of the tower and two 3-light windows to its right. The chancel south wall has a simpler 2-light window with cusped lights and without tracery, and the east window is 3-light Decorated. The north aisle, incorporating the vestry, is shorter than the nave and chancel and faces a steep bank. Its windows are similar to the chancel south window. It has only a 2-light west window, a 1-light vestry window on the north side and, in the east wall, a vestry 3-light window and doorway in a freestone surround.
INTERIOR: Four-bay arcades have octagonal piers and double-chamfered arches. The nave has a 5-bay arched-brace roof on corbels, and the chancel has a similar but keeled 3-bay roof. The chancel arch is double chamfered, of which the inner order is on corbels. Walls are plastered. There are raised floorboards below pews.

PRINCIPAL FIXTURES: Furnishings are generally undistinguished, of mid and late C19. The octagonal font is plain, the benches and choir stalls have shaped ends and the pulpit is octagonal with Gothic panelling. The communion rail incorporates a quatrefoil frieze and the reredos has Gothic panelling. There are several late C19 and early C20 windows, of which the Ascension window in the nave is signed by A.L. Moore (1910). There is a Boer War memorial brass plaque.

HISTORY: Parish church of 1857 by John A. Cory (1819-87), architect with offices in Carlisle and Durham, who built several churches in the north of England from the 1840s. He was County Surveyor of Cumberland 1862-68 before entering into partnership with C.J. Ferguson.

REASONS FOR DESIGNATION: The church of the Holy Trinity, Chapel Stile, is designated at Grade II for the following principal reasons:
* Holy Trinity is a modest C19 church but an essay in picturesque simplicity with its asymmetrical plan and stout tower.
* The building showcases traditional local materials, complementing other such C19 buildings in the village.
* The church is a landmark building on the hillside above the village and makes an important contribution to its historic character.