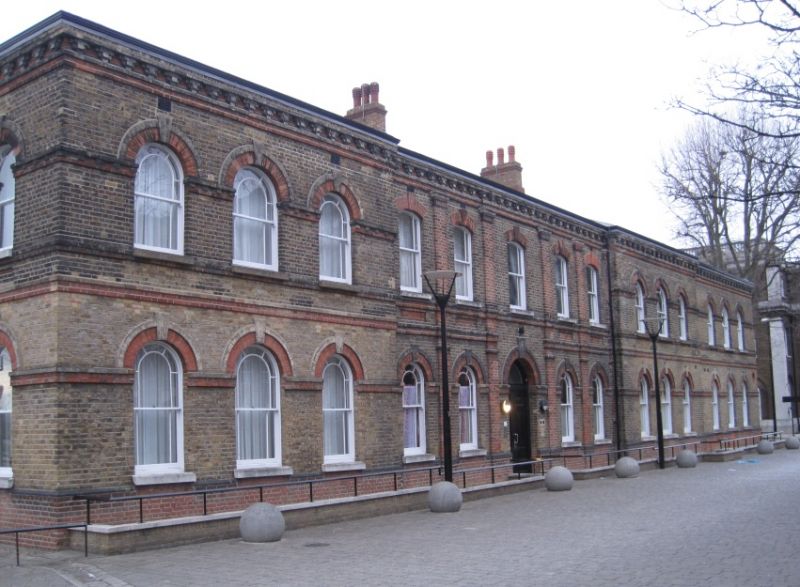 Chemistry laboratory, now office. 1864, designed for Sir Frederick Augustus Abel, War Department Chemist, extended to E and S in 1885, 1903 and 1913. Yellow brick with red brick dressings, ridge stacks and slate roof Double-depth plan, extended to east and north. 2 storeys; 11-window range. Symmetrical front with plinth, moulded impost bands and first-floor ci1l band and brick eaves cornice, the recessed middle 5-bay range articulated by pilasters with moulded capitals. Central round-arched doorway has a fanlight and door with 8 raised diamong panels, and rubbed brick keyed round-arched sashes with margin panes. Similar 3-window side elevations and 3x3 bay blocks to rear, one with glazed clerestorey. INTERIOR: contains a central dogleg stair with ornate cast-iron balusters and twisted newel, curtail and moulded railings, axial passage and panelled doors. The left-hand room open to the roof which has cast-iron elliptical arches with open spandrels on moulded corbels, spanning the room and with similar arches to the hips, and a timber balcony all round on foliate cast-iron brackets with railings as the stair. Historical note: This was the first custom-built laboratory in the Arsenal. Its function is clearly expressed through the design of the laboratory itself, the open left-hand room allowing fumes to disperse from the lab benches. The E wing housed the early photographic section of the War Department. Formerly had iron balconies at both ends. Included as very early purpose-built chemical laboratory, exemplifying the role of the chemist as the most significant factor in the advance of research and development in the post-1850s period in Europe.