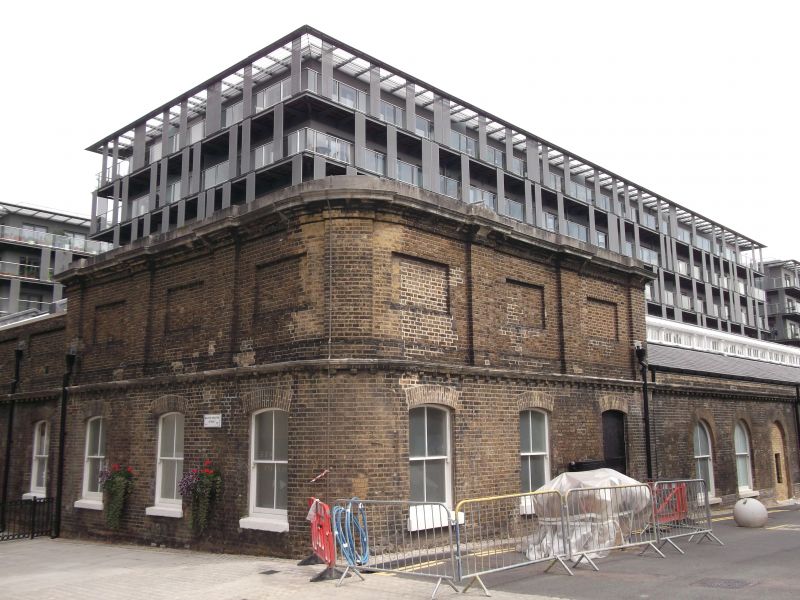 Cartridge factory, disused. 1855-6, to the designs of Cpt R Beatson, RE. Yellow stock brick with red brick dressings; C20 corrugated sheet valley roof; internal iron frame. PLAN: Rectangular plan 11 bays long and 2 bays wide, former beam engine houses in NW corner, and W former boiler house and E former rag store projecting to the N. EXTERIOR: 2 storeys; 9:1-bay range. Near-symmetrical front has red brick clasping pilasters, a plinth, cornice and parapet: central entrance bay set forward with an ashlar surround to segmental-arched carriage entrance with double doors, and a similar wide window above with key and imposts. Original window openings with rubbed-brick segmental arches; the window frames are C20 replacements. Similar surrounds to doorways with plate-glass overlights 4 bays from the ends. Right-hand end has a symmetrical 9-window range and a right-hand 5-window range former rag store wing, both with central entrances as the front. INTERIOR: Contains part of a 2-storey iron frame originally of 3 rows of tapering octagonal piers with flared caps and holes for the line shafting, the surviving S aisle has longitudinal and transverse cast-iron beams with joist sockets for the timber first floor. The roof has segmental-arched ties below the valley with open spandrels, and cast-iron rafters with compression pieces curved each side of a central circle, and lateral and longitudinal wrought-iron tension bars connected in the middle by a round plate. A short section of the SE roof replaced C20. Former outside walls have segmental-arched blocked windows. Historical note: Originally with an octagonal chimney inside a courtyard to the N, and N office building, used for making paper cartridges from rags. Part of the post-Crimean War expansion and improvement of cartridge-making facilities for the army. Subsequently used for making metal cartridge cases, including those for the Hodgkiss quick-firing guns in the early C20. The notable frame provides evidence for the variety of large iron-framed buildings of the 1850s in the RN Dockyards and railway manufacturing yards at Swindon and Derby. It combined its structural function with line shafting and pipework necessary for mechanised cartridge manufacture, and while not structurally advanced as Beatson's No 2 Ship Shop at Portsmouth (qv), is a complete example of a specialised type.
(RCHME, Historic Buildings Report, The Royal Arsenal Woolwich, Vol. II, 1994)