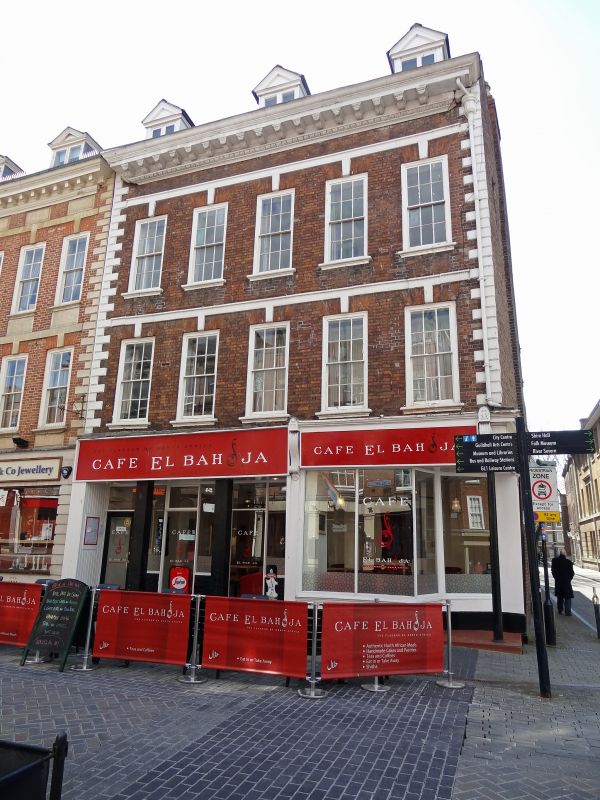 Includes: Nos.1 AND 3 BERKELEY STREET.
Two shops and town house, now cafe and dwelling. c1720 with
C19 and C20 alterations and extensions. Brick with dressed
stone details, timber crowning entablature, slate roof, brick
stacks.
PLAN: single depth with end gable, wing to rear right, and C19
infill in former yard at rear left; original stair turret
projects at rear of front range, reduced in height later and
capped by gable roof. Service wing at rear subsequently
divided as Nos 1 & 3 Berkeley Street now reincorporated as
rear part of cafe and dwelling.
EXTERIOR: front block of three storeys, attic and cellar; on
the front the former shop No.59 on left, now with entrance to
cafe, has late C20 front; the former shop No.61 on right has
late C19 shop-front, returned with canted angle into Berkeley
Street, has slender cast-iron stanchions; the shop fascias
framed by moulded consoles; the upper floors of five bays in
dark red brick in Flemish bond with stone details painted
white, with a raised band with an upper edge moulding at
second and attic-floor levels, and a deep, richly moulded
crowning entablature with Corinthian modillions; on each of
the upper floors four sashes of similar size with glazing bars
(3x4 panes) in openings with rubbed brick flat-arched heads
set with raised key stones below the raised bands, and
projecting moulded stone sills. Three roof dormers to attic
with pedimental gables and double casements.
On the elevation to Berkeley Street the end gable of front
range to left, with chimney-stack projecting on corbel from
first-floor level at the right-hand angle of the gable, and
service wing to right of two storeys and attic with a doorway
at either end; the doorway to left, formerly to No.1 Berkeley
Street, has a moulded stone architrave surround enclosing
semicircular fanlight with small key block and C19 four panel
door; doorway to right has a C20 four panel door; between the
doorways on the ground floor three windows with segmental
arched heads, the two windows to the right with C19 sashes,
the window to left with a C20 fixed light; on the first floor
three large window openings with segmental heads, the openings
at each at either end with C18 sashes with glazing bars (4x4
panes), and the central opening partially blocked and a C19

sash inserted in left side.
INTERIOR: on the ground floor C20 relining to cafe and service
rooms; within the stair turret at rear of main block from
first floor to attic an early C18 dog-leg staircase with
closed strings, capped newels and several surviving
barleysugar balusters; in first-floor room on east side raised
and fielded panels within window embrasures; double purlin
roof with ridge piece above the attic; room on first floor of
service wing has early C19 chimney-piece with reeded
architrave surround and corner stops. C18 brick walled and
vaulted cellar. Some evidence of timber-framing in the rear
wall of the main range may be surviving structure of earlier
building.
(BOE: Verey D: Gloucestershire: The Vale and the Forest of
Dean: London: 1976-: 246).