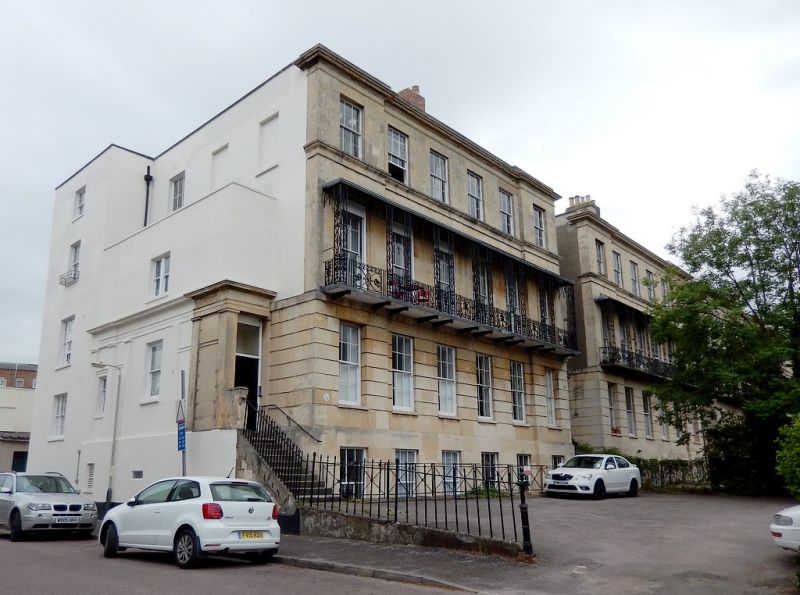 Includes: Nos.1-20 (former Nos.1, 2 and 3 Lansdown Road)
MONTPELLIER COURT.
Terrace of 14 houses, now houses, flats, offices and basement
shop and attached area railings, railings to sides of steps,
and end railings to No.14. Houses numbered right to left,
described left to right. 1825-35 with later alterations. Begun
by JB Papworth for Pearson Thompson and completed in similar
style by RW and C Jearrad. Ashlar (some painted) over brick
with mansard slate roof, stucco and brick party-wall stacks
and iron verandahs and railings.
PLAN: an almost symmetrical design of houses in pairs with
paired recessed entrance ranges and Montpellier Court to the
right, with its main facade to right return; service ranges to
rear.
EXTERIOR: mainly 3 storeys on basements, some entrance bays of
2 storeys, 50 first-floor windows (from left to right)
1:6:2:6:2:6:2:5:2:6:2:6:2:1:2:3. Of the main 6-window ranges,
end bays break forwards; the rhythm is worked out to right
with 1-window-bay breakforward, 2 set back and end 3-window
breakforward of which the left breaks forward again. Ashlar
detailing includes horizontal rustication to ground floor;
first-floor band; frieze and cornice above first floor, and
with crowning frieze, cornice and blocking course. Entrance
ranges mainly set back behind shared loggias. Mainly 2/2
horizontal-pane and 6/6 sashes (where original), several
retaining blind boxes; attics have 6/6 sashes, some
round-arched 3/3 sashes and casements. Entrances, flights of

steps (roll-edged where original) to 6-fielded-panel doors
with sidelights and overlights, some behind paired loggias
with pilaster between, round-arches with imposts and tooled
heads with keystones, entablature. Right return (Montpellier
Court) a 6-window facade with further, lower service range.
Similar horizontal rustication and 6/6 sashes. Central
entrance to main range, steps to 6-fielded-panel double doors
with side-lights and overlight with glazing bars within solid
porch with Doric pilasters and entablature, glazed to sides.
Rear retains many 6/6 and 8/8 sashes; No.8 has canted bay with
6/6 between 2/2 sashes.
INTERIOR: retain original joinery including panelled shutters
to some windows, and panelled doors; narrow-open-well
staircases where original have alternate iron stick and
embellished rods with wreathed handrail (including to
Montpellier Court); service stairs have stick balusters.
Plasterwork includes embellished cornices.
SUBSIDIARY FEATURES: first-floor verandahs have Carron Company
double-heart-and-anthemion motif balustrade and openwork
frieze; area railings have embellished X-motif. Railings to
sides of steps have lancet and fleurs-de-lys finials, some
with dogbars. End railings to No.14 have arrowheads,
embellished and anthemion finials.
HISTORICAL NOTE: Lansdown Place is shown on Papworth's plan as
a 'streight' plot and is 'the only part of his original
Lansdown design to have been completed largely as he intended.
It consists of 15 pairs of houses, each joined to those on
either side by a pair of recessed doorways'. Building began in
1825 and fourteen houses had been completed by 1828. Probably
another 5 houses had been finished by the time the Jearrad
brothers bought the development from Thompson in 1830. From
then it was finished to Jearrad's direction with minor
alterations to Papworth's design. Papworth's drawings for
Lansdown Place are in the RIBA library.
One of the most significant terrace designs in Britain
representing in its visual depth and variation of composition
a definite move away from the more rigid confines of the
Classical tradition.
Forms a continuous design of quasi semi-detached houses with
Nos 15-29 (consec) Lansdown Place, Lansdown Road (qv).
(The Buildings of England: Verey D: Gloucestershire: The Vale
and The Forest of Dean: London: 1970-: 141; Cheltenham Art
Gallery and Museum: John Papworth, Architect. An exhibition of
plans and drawings: Cheltenham: 1978-; Sampson A and Blake S:
A Cheltenham Companion: Cheltenham: 1993-: 69).