Lypiatt Terrace and Balustrades; Area Railings to Numbers 3 and 6 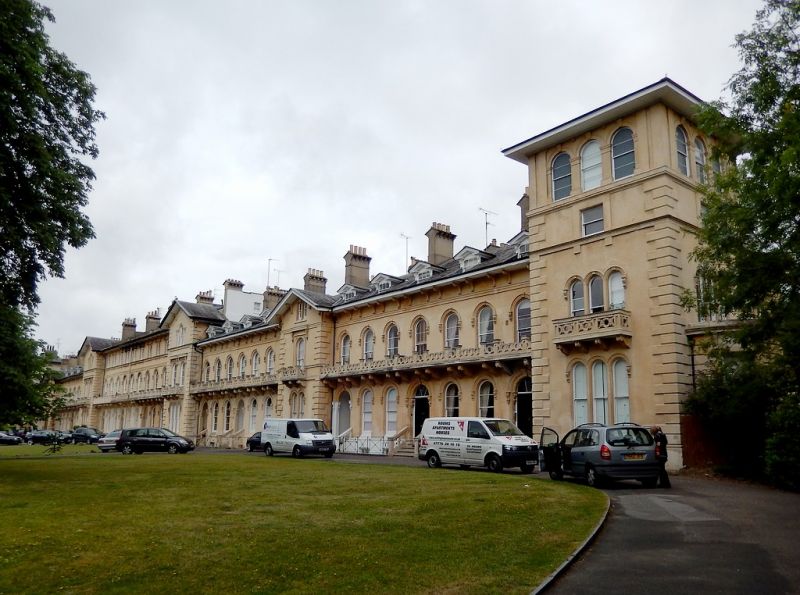 Terrace of 17 houses with attached balustrades throughout and
area railings to Nos 3 and 6. c1847. Architect, Samuel W
Daukes; builder, Richard Keitley. Ashlar over brick with slate
roof and tall ashlar and stucco party-wall stacks with
cornices; iron basement railings and rear balcony. Italianate
style. Double-depth plan with rear service wings.
EXTERIOR: a symmetrical design with central 3-storey, 10
first-floor window range, flanked by projecting 2-storey and
attic to gable, 2 first-floor window ranges, then 2-storey
with attics, 7-window ranges and outer 4-storey,
single-wide-bay, projecting, hipped roof towers; and with
2-storey range to left end; basements throughout. Ashlar
detailing includes quoins to breakforwards. Windows: inner
ranges have mainly 2/2 round-arched sashes throughout, with
tooled round-arched heads on corbels; end towers have 3-light
round-arched window with 1/1 sashes to ground and first floors
with tooled round-arched heads on outer corbels and chamfered
mullions, second floor has central 1/1 sash in tooled surround
and with feet and continuous tooled sill band, third floor has
three 2/2 round-arched sashes with pilasters between and
tooled arches with keystones on continuous tooled sill band
and with paired end pilasters. Gabled breakforwards to either
side of central range have 3-light round-arched window with
1/1 sashes to ground floor with tooled round-arched heads on
outer corbels and chamfered mullions and sill; first floor has
pair of 2/2 round-arched sashes in tooled surrounds and with
cornices on consoles; attic to gable has Venetian window with
1/1 sashes (that to centre round-arched) and tooled head on
consoles on continuous tooled sill. Gabled breakforwards
between 2-storey and attic ranges have 2-light round-arched
window with 1/1 sashes with chamfered mullion and sill and
tooled arch on outer corbels to head; first-floor band and
band above; first floor has 1/1 round-arched sash in tooled
architrave and with cornice on consoles which interrupts
second-floor band; attic to gable has 2-light 1/1 sashes with
tooled surrounds and chamfered mullion and sill. Roof dormers
have 3/3 sashes and open pedimented gables. Entrances to ends
and centres of long ranges: flights of steps, roll-edged where

original to 4-panel outer double doors with fanlights with
tooled arches to heads on corbels and recessed 4-panel,
part-glazed doors with side-lights and fanlight. Left end has
entrance to angle with 2-storey range. Wide eaves on brackets.
Basement has some 6/6 sashes. Right return has ground-floor
bow with horizontal rustication and 2/2 sashes, curved on
section. Rear has 6/6 sashes with margin-lights.
INTERIOR: noted as retaining original joinery including
shutters to some windows; photographs dated 1993 show ground
floor has embellished cornices with naturalistic ornament and
marble fireplace with corbels, acanthus modillion cornice to
entrance hall, otherwise not inspected.
SUBSIDIARY FEATURES: iron details include area railings to Nos
3 and 6 with X-motif; to left return a first-floor balcony
with Gothic arches. Ashlar features: first-floor continuous
balustrade to ranges on brackets has pierced circle motif;
similar balconies to breakforwards. Flights of steps have
stone balustrades with pierced quatrefoils where original.
Notable in the development of the English terrace as
signifying a departure from the Neo-Classical into the
informal Italianate, giving the appearance of a series of
villas.
(The Buildings of England: Verey D: Gloucestershire: The Vale
and The Forest of Dean: London: 1970-: 143; Sampson A and
Blake S: A Cheltenham Companion: Cheltenham: 1993-: 71).