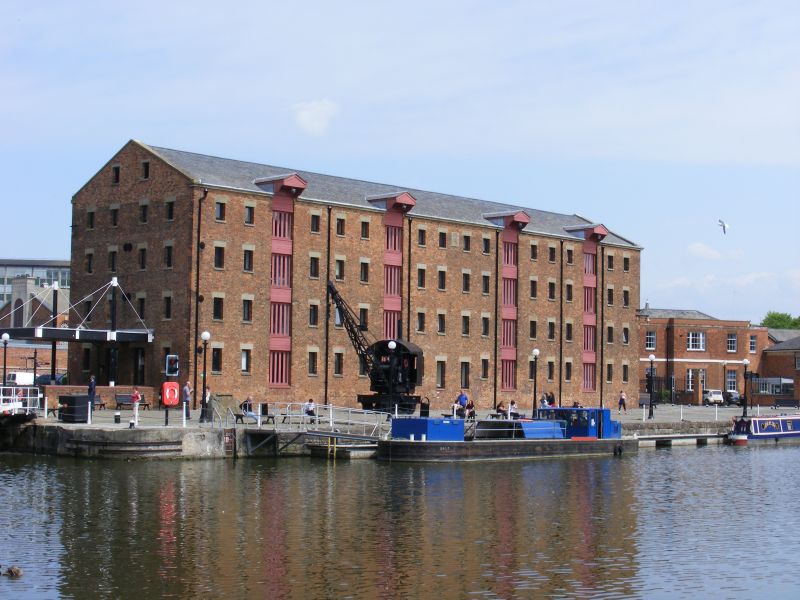 Bonded warehouse, now local authority offices. 1826-7. By
Barton Haigh, architect, of Liverpool, and William Rees and
Son, builder, for the Gloucester and Berkeley Canal Company
and leased to various corn merchants; converted to offices by
and for Gloucester City Council, 1985-6. Brick, stone lintels
and sills to openings, internally the timber floors originally
supported by cast-iron columns, slate roof. A large,
rectangular end gabled block, originally two semi-detached
units of equal size; late C20 canopied entrances added in the
centre of the north side and at the west end.
EXTERIOR: four storeys, basement and attic; stone copings to
gables and moulded stone eaves cornice grooved to house a
lead-lined gutter on each side; in both side walls four former
loading door openings all infilled with late C20 fenestration,
above each opening a restored timber, gabled, cat-head hoist
canopy at eaves level. A stone tablet below the cornice is
inscribed "The Gloucester and Berkeley Canal Company's
Warehouses Erected by W. Rees and Son Ano. Dom. 1826".
On the ground floor in the centre of the south side two
doorways now partly infilled as windows; otherwise on each
floor original window openings between and flanking the
loading door openings in 2x3x4x3x2 sequence; in each end wall
four similar windows and two windows in the west gable; all
windows have late C20 side-hung sashes; the basement windows,
indicated by stone lintels, were bricked up during
construction to comply with HM Customs Regulations for bonded
stores. C20 entrance doors on north side.
INTERIOR: brick-vaulted basement; generally substantially
altered in conversion to offices.
HISTORY: the earliest surviving warehouse within the docks.
and built in anticipation of increased trade as the Canal
neared completion. The original design for a range of three
units of five storeys was reduced to two units in the contract
and the height reduced by one storey during construction.
(Conway-Jones H: Gloucester Docks An Illustrated History:
Gloucester: 1984-: 164; Original Drawings in Gloucestershire
Records Office: D2460 Drawings 1-F).