Church of the Resurrection of Our Lord Jesus Christ and of the Blessed Virgin Mary, West Malling Abbey 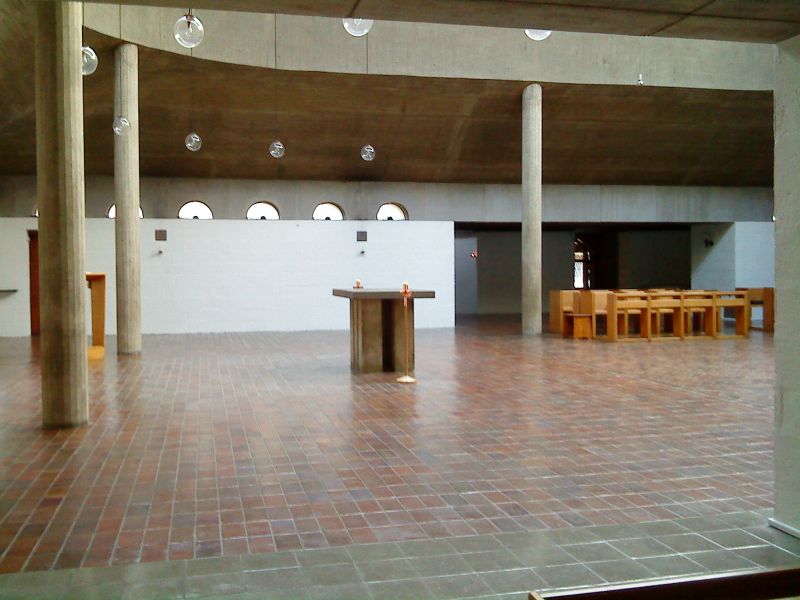 Entry Name: Church of the Resurrection of Our Lord Jesus Christ and of the Blessed Virgin Mary, West Malling Abbey

3/10006 Church of the Resurrection
of Our Lord Jesus Christ and
of the Blessed Virgin Mary,
West Malling Abbey

Abbey convent church. 1964-6, by Maguire and Murray. Concrete block walls, incorporating reinforced concrete ring beams at the top of the walls and drum. Reinforced concrete slab lower roofs are internally board-marked, and clad in pantiles; timber upper roof stained green and blue is tile-clad. Rectangular church space under cylindrical upper drum, the latter likened by Maguire to a `double oast-house', with single-storey nuns' entrance and chapel leading from Maguire and Murray's cloister to south, and a separate side chapel for guests to north with its own entrance and interview room reached from the grounds with pine boarding and roof. The nuns enter the church through a Norman door, largely blocked by Maguire and Murray. The chapel with funnel-shaped top-light. Church with round-arched clerestory windows, which pivot but which do not have external frames. There is another ring of glazing in the roof. Guest chapel entrance and interview room wrapped round the chapel; these are fully glazed above low sill and have a large porch with an inscription by Ralph Beyer on Edgehill stone commemorating the architects and builders. He also designed the foundation stone. Interior has six columns inserted in 1972. The body of the church has a low seat round its edge, a pavioured floor levelled in 1972, and a forward altar, foreshortened in 1972. Maguire and Murray's nuns' stalls are severely geometric in style, and of beech-faced blockboard, with simpler bench seating to guest chapel which has cork flooring. Lighting is from hanging glass spheres. In the entrance chapel a Doulton firkin vat set in concrete is used as a stoup and (occasionally) as a font. The convent at St Mary's Abbey, West Malling, was founded in about 1090 by Gundulf, Bishop of Rochester. In 1892 the Abbey was refounded by Charlotte Boyd, and in 1916 the present Anglican Benedictine community moved here from Baltonsborough near Glastonbury, Somerset. Maguire and Murray had already designed a cloister and conventual building for the order when they were commissioned to produce an abbey church, made possible by a legacy from Marjorie Forbes Close, a leader in the revival of Anglican plainsong, in memory of her mother. The new building is set on the site of the crossing of the original abbey church. It is joined to the surviving transept of this, where the nuns had previously held their services, though it is entered via the new cloister. West Malling Abbey church is important as the most geometrical of all Maguire and Murray's churches. Maguire has explained that he has been inspired by the Renaissance sources revealed by Rudolf Wittkower, his tutor at the Architectural Association in the early 1950s and author of "The centrally planned church" in `Architectural Principles in the Age of Humanism', 1949. The movement from rectangular to cigar-shaped space was more dramatic before an engineering miscalculation forced the installation of columns, but is now perhaps more satisfying. Maguire and Murray were the first Anglican architects to challenge conventional church planning from liturgical first principles, which they expressed in a rigorously geometrical idiom. The abbey church is a remarkable modern intervention in a setting of great antiquity, providing an uncompromising yet sympathetic contrast to the grade I medieval abbey west front and transept, and the other surviving conventual buildings. Robert Maguire has said that he aimed `to produce as easy-flowing a transition from the ancient buildings to the new as possible, by using traditional materials and craftsmanship in the forms which are natural to them, but organised in a modern way' (Kent Messenger, June 1966). The Mother Abbess, Osyth Lucie-Smith, wrote to her Oblates in 1966, `I think some of you may find it difficult at first to get used to the building, but to us its simple unadorned beauty is completely satisfying.' Concrete Quarterly admired the church as `the most skilful use of modern materials and structural techniques among a group of buildings which date back to the eleventh century. And this without any apparent discordant note.' Sources Kent Messenger, June 1966. Script prepared by Robert Maguire, held at Abbey.Architectural Review, November 1966, pp.339-42 Concrete Quarterly, January-March 1969, pp.31-3 Robert Maguire, Continuity and Modernity in the Holy Place', in Architectural History, vol. 39, 1966, pp.1-18.