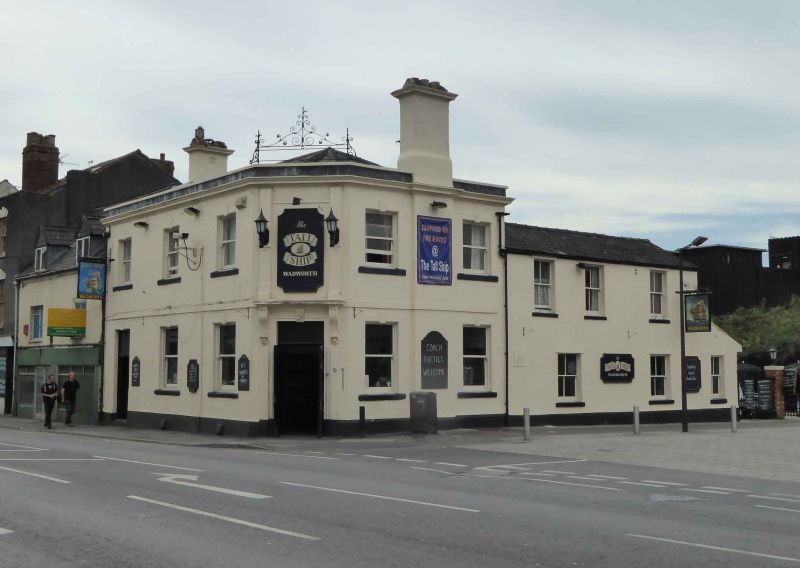 Formerly known as: The British Flag SOUTHGATE STREET.
Public house. Mid to late C19, on south-west corner of
entrance to Docks from Southgate Street. Stuccoed brick with
stone details, slate roof, two stuccoed stacks. Italianate
style. Range to front with entrance in canted angle at the
corner; lower wing to rear right.
EXTERIOR: two storeys and cellar; the west and north fronts
have offset plinths, raised band at first-floor level and
moulded crowning cornice with parapet above; the entrance
doorway is framed by a moulded architrave with a carved key
stone in the lintel and pilasters with moulded brackets
supporting a cornice; on first floor above the doorway
panelled pilasters frame a window concealed by a sign; on the
front in Southgate Street three plain sashes on the ground
floor in plain stone frames with projecting and raised key
stones in the lintels and projecting stone sills; on the first
floor three similar but slightly smaller sashes in similar
frames; on the front facing the entry to the docks a central
projecting chimney-stack capped by a moulded cornice; on
either side of the stack on each floor a sash in a frame
matching the windows in Southgate Street, The wing at the rear
has irregular fenestration with three similar sashes on each
floor. On the parapet over the canted angle a wrought-iron
frame with decorative brackets and cresting.
INTERIOR: altered on ground floor.
An externally complete public house of this date historically
linked with and prominently sited close to The Docks (qv) to
the north-west.