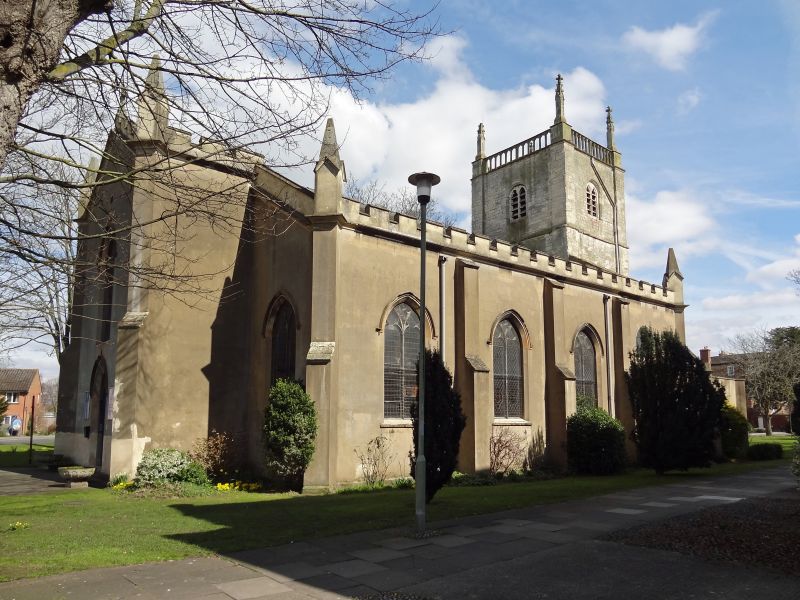 MATERIALS: the church is built from ashlar and rubble, the nave stuccoed; the gabled roofs are covered in Welsh slate to the nave, and Forest stone slates to the chancel.

PLAN: broad nave of four bays, with north and south aisles, north and south porches projecting from the eastern bay, a central tower and a two-bay chancel, the vestry is attached at the south-east.

EXTERIOR: the church has a wide nave and narrower chancel, each with a different external treatment, clearly denoting the main building phases. Nave and aisles have a gabled west wall, the bays defined by buttresses and with diagonal buttresses with pinnacles at the west end, all with two offsets, a crowning string course and embattled parapets. In the west wall is a two-light window to nave and a two-light window to each aisle; on each side in each of the three western bays of the aisles a two-light window; all have simple cusped tracery in pointed arched heads with stopped hoodmoulds. Each porch has diagonal buttresses, a coped parapet and arched doorway, and above each porch is a circular window inserted 1845. The square, central tower is in three stages and has clasping angle buttresses to the upper stages. In the upper stage on each face is a two-light belfry window, and above an open, arcaded parapet between attenuated pinnacles at the corners. The chancel has diagonal buttresses at east end and bays defined by a buttress on each side, all with two weathered offsets; a coped east gable wall with a window formed from three C19 stepped, trefoil-headed lancets, and a small vesica window in the gable. In the sides in each bay are restored two-light lancets with trefoil heads.

INTERIOR: the church is entered through the west door, which gives access to the church hall created in 1980 by the partitioning off of the area beneath the western gallery, which has been brought one bay eastwards to increase the space for the hall. Its internal finishes date from the late C20. The nave dates from the early-C19 rebuilding, with later alterations. The nave arcades have octagonal columns with moulded collars, around which are set elaborately-detailed scrolled iron lighting fixtures. The aisles have flat, boarded ceilings, rising to a pitched ceiling in the nave. The floors are of parquet, with stone flags to the aisles. The walls are plastered and painted. The west end retains the form of the gallery, with Doric columns supporting its panelled front, which has an elaborately-scrolled iron rail above. The space beneath the gallery is separated from the nave by a panelled partition which has double doors at its centre, flanked by the columns. The nave and aisles retain dark-stained pews, with rectangular, panelled ends. The choir stalls are separated off by a dwarf stone wall with elaborate scrolled railings above. The windows have diamond-pattern glazing with blue margins; one includes a memorial to the Gloucestershire poet Ivor Gurney (1890-1937). The south nave windows, including this one, are all by Roy Coomber, date from 1999-2000, and include heraldic motifs.

An very wide, round arch in the east wall gives access to the chancel through arches supporting the west and east sides of the central tower. On the west side, the C12 archway has square responds with scalloped capitals, and an arch with an outer order of chevron moulding formerly supported on angle shafts. The tower stonework is exposed, in contrast with the nave; the floor is covered in stone flags. A number of tablet monuments are attached to the walls. The windows have Art Nouveau-style glazing, dating from circa 1903. The C13 arch on the east side has clustered shaft responds with foliated capitals and a plain roll moulding, and gives access to the two-bay chancel beyond the tower. The chancel has a two-bay quadripartite vault with diagonal and transverse ribs springing from clustered wall shafts with foliated capitals, mostly restored or recut; the interstices are plastered and painted. The principal ribs have moulded ball decoration. The remainder of the stonework is exposed. The altar is set up a shallow stone step, and the floor has C19 polychrome tiles beyond. There are C19 wrought-iron communion rails in the form of arcades with pierced and foliate spandrels. In the north wall of the chancel is an altered C14 arched recess housing an effigy. Under a trapdoor in the west end of the nave, about 3m below the current ground level, the remains of the Roman building beneath the church is visible, in the form of a fragment of monochrome mosaic. The adjoining fragment of stone wall may have belonged to the C11 annexe at this location.

PRINCIPAL FITTINGS: the hexagonal timber PULPIT is made from richly-carved ogee-crocketed panels of the C15; it is set on a later timber plinth. The east window and the north and south windows in the chancel have STAINED GLASS by George Rogers, of 1848-9. Foremost among the MONUMENTS is the early C14 effigy of a priest in Eucharistic vestments, set in the mutilated C14 recess in the chancel; possibly commemorating William Chamberlayne (d.1304), or John de Rodberrow (d.1302). There are several other, minor monuments, including two by James Cooke, who built the present nave, dating from circa 1819-21. The ORGAN, formerly in the Church of St Nicholas, Westgate Street, Gloucester, is in a fine mahogany case of circa 1760-80, having towers to either side with draped urns and a crown in the centre; some of the stopped wooden flutes are dated 1766. There are six old BELLS: (i–iii) 1705 by Abraham Rudhall; (iv–v) 1636 by Roger Purdue; (vi) 1710 by Abraham Rudhall.

St Mary de Lode is probably the oldest church in Gloucester, a C5-C6 foundation built over a Roman building of high status; the remains of a monochrome mosaic floor can be seen under a trapdoor in the nave. It is believed to be the church recorded in the Domesday Book as the only parish church in Gloucester in 1086, although its name is not mentioned. It was the parish church for the Benedictine Abbey of St Peter, now Gloucester Cathedral; it stands just outside the cathedral precinct. The church is recorded from the C12, and it served a very large parish encompassing many areas which are still suburban to Gloucester in the C21. In the Middle Ages the church was usually referred to as St Mary before the abbey gate, and in the C16, it was also known as St Mary Broadgate. Its present name, St Mary de Lode, is recorded from 1523, and derives from a nearby crossing of the Old Severn, a channel of the River Severn: lode meaning watercourse in late Middle English. The earliest specific record of the church in documents dates from the mid-C12, but this source records that the building was destroyed by fire in 1190. Excavations in the nave in 1978-9 demonstrated that there may have been a timber church on the site from the C6, and that a mainly timber nave had been built in the late C9 or C10; this may have had a timber west gallery or screen, but by the mid-C11, a stone addition was made to the west, perhaps to support a more substantial gallery. The present tower and chancel, along with a nave since lost, were constructed as part of the rebuilding circa 1190, and the chancel was extended by a further bay and its ceiling vaulted in the mid-C13. The church required extensive repairs in 1576, perhaps including the reconstruction of the C12 and C13 chancel. During the Civil War, the church was twice used to hold prisoners of war: in 1643 for Royalist troops taken at Highnam, north of Gloucester; and in 1646 for those captured at Stow-on-the-Wold. A spire had been added to the tower but by the early C18 this had blown down in a violent storm, perhaps in 1703. By this date, a transeptal bay had been added in each aisle, and a vestry erected. A gallery was added by the early C19, through charitable funding.

In 1825-6, the nave and vestry were rebuilt by local mason James Cooke, in an early Gothic Revival style. The porches were also added as part of Cooke’s campaign of rebuilding, and the gallery was relocated to the west end at the same time. There were successive phases of alteration through the course of the C19. In 1845, the tower was restored, and the circular windows above the porches inserted. By 1850, the chancel had been restored and the east window replaced, probably circa 1848 by Francis Niblett. In 1865 further restoration work was carried out and the church re-pewed, with the examples which are in situ in 2014. Four years later the chancel was again repaired, with some of the fabric renewed. In 1885, part of the gallery was removed, and the vestry was enlarged. One of the more striking alterations was made in 1896, when new choir stalls were installed in the east end of the nave, to either side of the tower arch, separated from the body of the church by a low stone screen with an elaborate scrolled iron screen. In 1978-80, the gallery became redundant as it was moved eastwards in the nave and the area beneath it enclosed to create a new church hall in the west end of the church.

The church of St Mary de Lode, dating from 1190 and the mid-C13, the nave added in the C19 and with alterations in the C19 and C20, is listed at Grade I, for the following principal reasons:
* Architectural interest: the chancel and tower date from 1190, with extensions in the mid-C13, meaning that significant very early fabric survives;
* Historic interest: St Mary de Lode is the earliest surviving church in Gloucester, and was the parish church to the Abbey of St Peter, whose abbey church survives to the east as Gloucester Cathedral;
* Archaeological interest: the building is set over the remains of a large Roman building, parts of which survive beneath the nave floor, together with the remains of the earlier nave demolished in the C19;
* Interior interest: the Norman tower and chancel arches survive well, and are complimented by the C19 interior features, including the remains of the gallery and the C19 choir in the nave;
* Fixtures: the church includes an altered C14 recess in the chancel, and houses a number of monuments, including the early-C14 effigy of a priest in Eucharistic vestments;
* Fittings: the fine, richly-carved pulpit dates from the C15, and is complemented by a good C18 organ;
* Group value: with the Grade II-listed Bishop Hooper monument to the east, and the numerous listed buildings on the east side of St Mary’s Square, which front the cathedral close beyond.