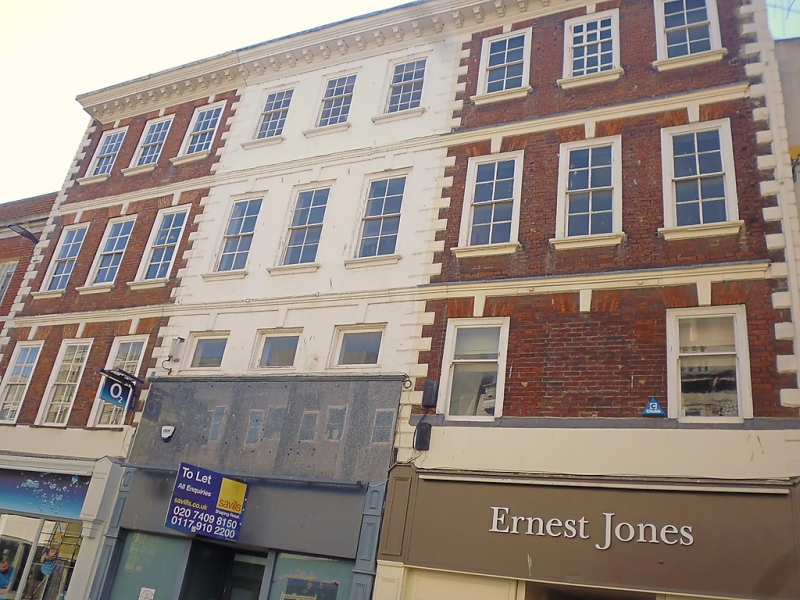 Three town houses, now a terrace of three shops and former
dwellings. Early C18, C20 alterations. Red brick with stone
details, the front of No.8 now painted white, slate roofs,
flat to front. Double-depth block.
EXTERIOR: imposing, uniform facade of four storeys, C20
shop-fronts; on the upper floors each unit of three bays is
defined by chamfered stone quoins; a moulded stone string
course at second and third-floor levels, and a timber crowning
entablature (renewed mid C20) with a moulded modillion cornice
returned onto the quoins at each end. On the first floors the
central window opening of No.6 is blocked and C19 plain sashes
with raised sills inserted in the openings on each side, the
lower half of later plain sashes in the window openings of
No.8 are concealed by a high shop fascia, in No.10 some
partial sashes with glazing bars; on the second floors later
sashes with thin glazing bars (2x4 panes); on the third floors
the central window of No.6 has sashes with thick glazing bars
(3x5 panes) and sashes with thin glazing bars on each side, in
No.8 sashes with thin glazing bars (3x5 panes) and in No.10
(3x4 panes); all flush sashes in openings with rubbed, light
red, flat-arched heads set with raised key stones directly
below string courses and crowning entablature.
INTERIOR: mostly refitted in C20; in No.8 on upper floors a
C18 staircase.
A five-bay four storey building with identical details,
including wood modillion cornice and lead-covered flat front
roof, existed at Nos 16 & 18 Westgate Street (demolished
1935). It is shown on Kip's aerial view, published in 1712, so
the date of this block could be c1710.