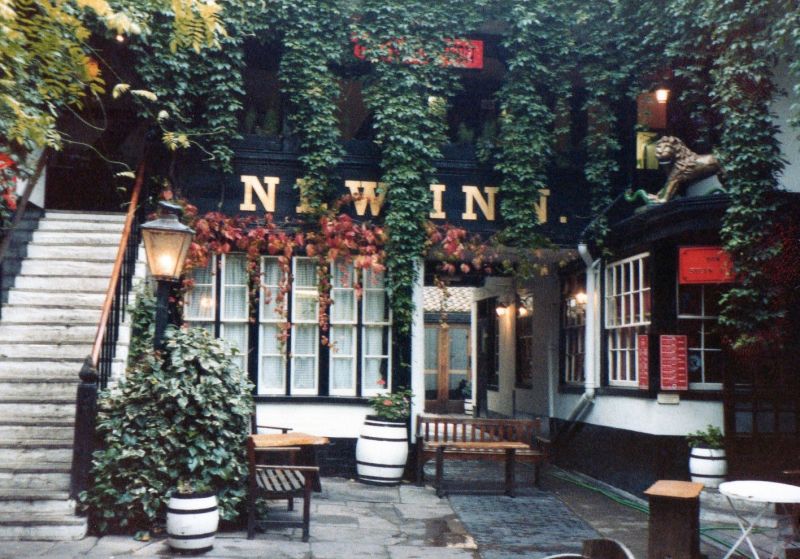 Inn, now hotel, restaurant (No.16), and two shops (Nos 18 &
20). Mid C15 with many later alterations and minor additions.
By J Twining. Massive timber frame of oak, not chestnut as
recorded earlier, with rendered panels including some original
lathe and plaster nogging, brick partly rendered; brick
stacks, plain tile roof on north range, otherwise gabled and
hipped slate roofs.
PLAN: a large, rectangular building of four ranges enclosing a
courtyard entered from Northgate Street through a carriage way
in the west range; within the courtyard open galleries
providing access to chambers (originally 7.9m x 4.7-5.9m,
since subdivided) on each of the upper floors of the four
ranges, underbuilt at ground-floor level; facing Northgate
Street on the north side of the carriage way the two shops and
on the south side the restaurant; a cross-gabled wing projects
from the south end of the east range, an enclosed yard at rear
of the main building is entered from the main courtyard
through a carriage way at the south end of the east range.
Pantin considers that the hall and adjacent kitchen were
probably sited in the south range, stabling to rear and
parlour in centre of north range.
EXTERIOR: all the ranges enclosing the main courtyard of three
storeys and attics; the front of the west range facing
Northgate Street originally of seven framed bays with
continuous jetties to the upper floors; in late C18 the front
above inserted shop-fronts remodelled as a rendered facade
with sash windows, the front further altered in 1924 by the
addition of boards imitating timber storey posts supporting a
plate at eaves level with a parapet of small panel framing
above; the north bay was restored to its original jettied form
in 1924; on the ground floor C20 shop-fronts to left and
restaurant front to right of carriageway; at north-west corner
an original, richly decorated dragon post carved with a niche
containing the mutilated figure of an angel under a pinnacled
canopy, and with panels of Perpendicular tracery, supports
carved brackets below the dragon beam; the former first floor
jetty to the right-hand side of the carriageway is supported
by a gilded bracket with leaves carved in the spandrel on the
exposed left-hand side of the bracket; at first-floor level

the jetty of the restored bay is concealed by projecting
shop-front; the first floor dragon post, carved with
Perpendicular panels, supports moulded bracket to dragon beam
in the jetty with moulded bressumer at second-floor level; on
both upper floors restored intermediate rails with close
studding below and C20 three-light, timber-framed, casements
with upper transoms and leaded lights above; to right of the
restored bay, in the second bay on the first floor a late C18
large tripartite sash window with glazing bars (3x4 panes and
1x4 in the side-lights); otherwise in all bays on both floors
sashes with glazing bars (on first floor 3x4 panes, on second
floor 3x3 panes); in New Inn Lane the north return elevation
is jettied at both upper-floor levels with moulded bressumers
supporting bay posts and in most bays intermediate rails with
close studding; the east front of the east range originally
jettied on both upper floors now altered in part.
Within the courtyard is a continuous gallery at first-floor
level on all sides, with evidence for wooden mullioned windows
with traceried heads; reached by an external flight of stairs
originally in another position and rebuilt in the north-east
corner in the C19; on the east side on the ground floor a
carriage way to right leading to the rear courtyard and to
left a large tripartite window with glazing bars; the plain
front of the balustrade to the gallery is inscribed "NEW INN"
in lettering which replaces C19 original; above the balustrade
is an arcade of six bays, probably the original timber posts
encased or replaced in late C18 as piers with impost moulding,
and with segmental arches; the second floor extends over the
gallery with a pair of linked cross gables above projecting
from the lateral roof over the east range, the gables have
plain timber barge boards and knopped finials; on the second
floor below each gable a sash with glazing bars (4x4 panes);
on the north side the walls and gallery parapets are rendered;
on the ground-floor later door and window opening; in the open
gallery at first-floor level and in a gallery at second-floor
level the original posts are partly concealed by the parapets
above; on the south side the jettied first floor is underbuilt
at the east end with a projecting porch with glazed door and
windows with glazing bars; the gallery above, similar to the
gallery on the north side on the west side, has wide boxed
eaves, possibly the encased jetty of a former upper storey; on
the east side the carriage way leading to Northgate Street is
framed by a pair of massive, moulded timber posts rising to
the underside of the second-floor jetty with an arched brace
to either side supporting the jetty; above the carriage way
lintel beam is an early infill wall of close stud framing with
an inserted C18 sash with glazing bars (3x4 panes); on the
second floor exposed framing, probably a later remodelling,

with two inserted C18 sashes with glazing bars (3x4 panes).
INTERIOR: timber-framed walls, posts and beams are exposed
throughout the building; in roofs to each range except for two
central bays in the west range, in the north and east ranges
are closed trusses with diminishing principal rafters with
upper and lower collar ties clasping upper and lower purlins
an unusual example in a more south-eastern carpentry
tradition, three vertical struts between the principal beam
and the lower collar and two vertical struts, between the
lower and the upper collars; between the two central bays in
the west range above the carriage way an open truss with
run-out chamfers to the principal rafters, collars and purlins
indicating the former existence of an upper hall or chamber;
no evidence of other features of interest noted in those parts
of the building inspected. Panelling in a suite on the first
floor installed in the C20.
HISTORY: originally a large hostelry built for the former
Benedictine Abbey of St Peter by John Twyning, a monk of the
abbey, on the site of an earlier inn. At the dissolution of
the abbey the inn passed to the Dean and Chapter of Gloucester
Cathedral and leased to various inn holders until sold in
1858.
The building is the most complete surviving example of a
medieval courtyard inn with galleries. The tradition that the
inn was built to provide lodgings for pilgrims to the tomb of
Edward II was not recorded before the C18.
(Studies in Building History: Jope EM (ed): Medieval Inns:
London: 1961-: 166-191).