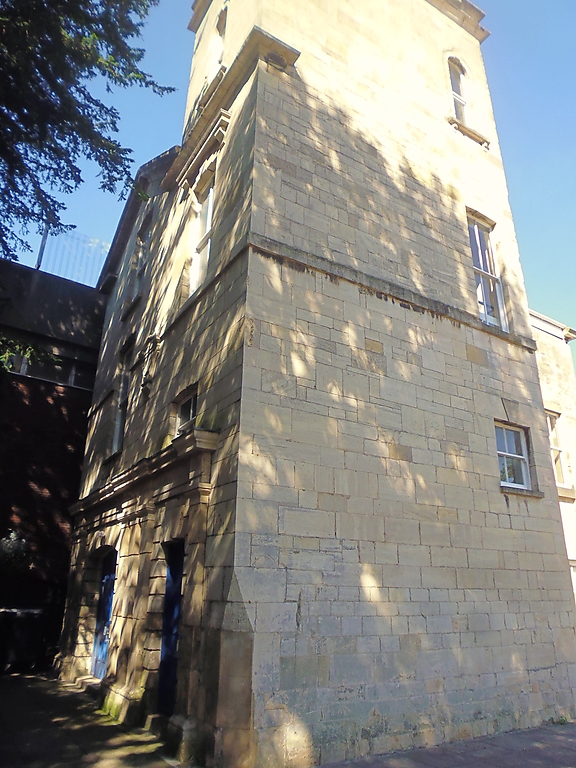 The surviving portion of a former house on the south side of
the former Bell Lane, now offices. 1864, later alterations.
For TF Addison, a lawyer. Ashlar, dressed stone in courses,
and rubble rendered in part; some of the masonry probably
medieval and from demolished parts of the Franciscan Friary
(Greyfriars) (qv), slate roof. An east-west, gabled range,
formerly a wing at the rear of house, with the tower attached
on the south side at the west end built as a feature within
the former back garden of the house.
EXTERIOR: tower of three tall storeys, range of three storeys;
the tower at first-floor level on the west and south sides has
a raised band, and on all sides a crowning cornice and
crenellated parapet with weathered coping; on the west side
the entrance doorway in doorcase with pilasters and
entablature, on the south side to right on the ground floor a
snall square sash, above on the second floor a tall sash, both
in openings with flat arched heads with key stones, on the
third floor in each face a tall, semicircular arched sash; all
in similar openings with plain architraves, raised keystones
in the arches and projecting sills on moulded end-brackets.
The adjioning range at its east end has a stone-coped, open
pedimental gable with moulded verges; on the ground floor a
doorway with C20 French doors, on the first floor a tripartite
sash, and on the third floor extending into the gable a
similar but taller tripartite sash; on the south side on the
ground floor two sashes and on the first floor to right a
sash.
INTERIOR: not inspected.
HISTORY: plaque attached to west wall is inscribed: "ADDISON'S
FOLLY was built in 1864 by Thomas Fenn Addison in memory of
Robert Raikes who, together with Thomas Stock (both pioneers
of the Sunday School Movement), in 1780 started a Sunday
School to teach poor children to read".