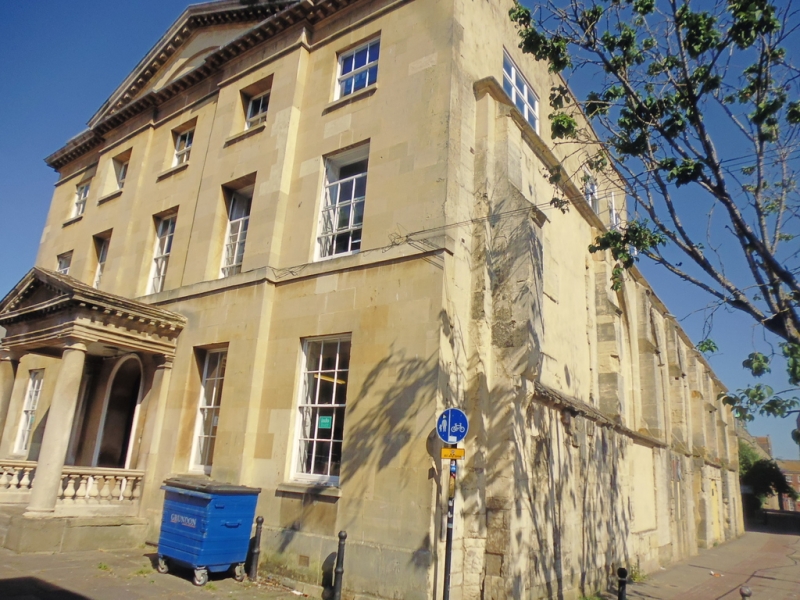 Town house and the adjoining remains of the nave and north
aisle of the church of the former Franciscan Friary, now
library. The friary founded c1231, the church rebuilt c1518 in
Perpendicular Gothic style with funds provided by the patron,
Maurice Berkeley, Lord Berkeley. After the Dissolution in 1538
the buildings of the friary adapted to various uses, in 1643
they were severely damaged in the siege of the city by
Royalist forces and by 1721 only the nave and its north aisle
survived, later in the C18 houses were built within the walls;
in c1810 a substantial house in a classical style built into
the west end of the medieval remains for Philo Maddy, currier;
in the 1960s the remains of the church to the east of the
house cleared of later structures and the masonry consolidated
by the Ancient Monuments Branch of the former Ministry of
Public Building and Works, and the house converted for use as
a public library for Gloucestershire County Council.
REMAINS OF THE CHURCH: ashlar and rubble.
PLAN: remains of church comprise nave and slightly narrower
north aisle originally of seven bays; the house occupies the
site of the two western bays with remains of the south wall of
the nave and the north wall of the north aisle incorporated
into its side walls.
EXTERIOR: the south wall of the nave and north wall of the
north aisle are similar and survive to full height, externally
the bays are defined by buttresses with three weathered
offsets; the tall arcade between the nave and aisle, which has
moulded lozenge-plan piers with moulded bases, capitals and
arches, is partially infilled by later rubble blockings; in
each bay of the outer walls, the nave and north aisle are the
remains of a large four-light arched window and at the east
end of the north aisle the remains of a six-light window; some
windows retain portions of perpendicular tracery partly
preserved by later infilling; at the bottom of each window the
lights are infilled with panels each carved with an escutcheon

in high relief; the wall faces between the windows are
decorated with blind panelling; at east end of nave moulded
piers support a transverse arch at the former crossing; on the
south side of the nave evidence of the former north walk of
the cloister abutting the eastern six bays. Reset in the outer
face of the nave south wall two stone shields carved with the
arms of Chandos and Clifford of Frampton, possibly from a
former funerary monument.
GREYFRIARS HOUSE: ashlar, slate roof.
PLAN: double-depth block.
EXTERIOR: three storeys and cellar. Symmetrical entrance
front, facing west, of five bays with a slight projection to
the three central bays, offset plinth, a plain raised band at
first-floor sill level, crowning entablature with modillion
cornice, a modillion pediment above the three central
projecting bays and parapets above the outer bays; the central
bay is slightly recessed on the upper floors above the
first-floor sill band and in the tympanum of the pediment the
recess has a cambered arched head; on the ground floor in the
central bay a projecting, single storey entrance porch in
Roman Doric order with columns at the outer corners supporting
entablature and pediment, in each bay to either side sashes
with glazing bars (3x4 panes); on the first floor five sashes
with similar glazing and on the third floor short sashes with
glazing bars (3x2 panes), all in openings with projecting
stone sills; in the side walls similar sashes with glazing on
bars on each floor.
INTERIOR: largely refitted in C20.
Scheduled Ancient Monument.