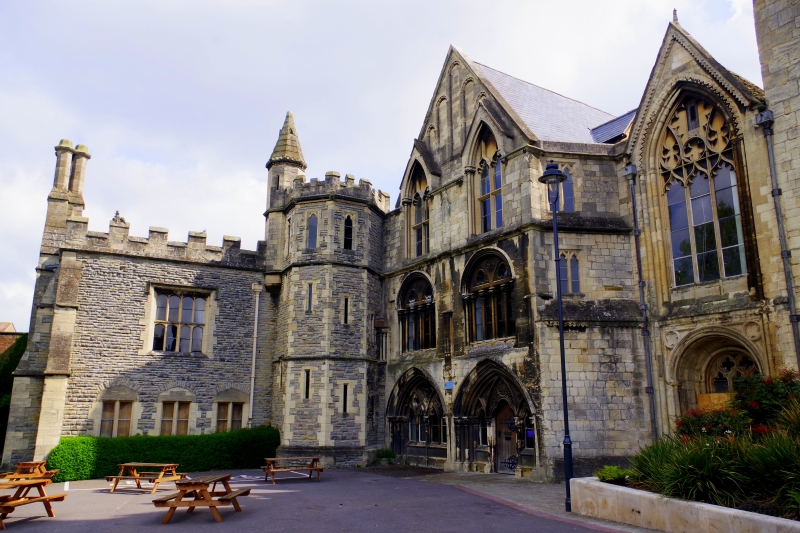 Abbot's Lodging in the former Benedictine Abbey of St Peter,
from c1325 the Prior's Lodging, from 1541 the Deanery of
Gloucester Cathedral, and from 1941 diocesan offices, now
offices, reception rooms and restaurant. Early and mid C12
with major additions and alterations in early C13, C14 and
C15; refitted internally in late C16, extensively restored
with some alterations, 1863 to 1870, by Fulljames and Waller
for Dean Law; restoration c1962 by Waller and Ashwell. Ashlar
and rubble, timber frame, lead and tile roofs.
PLAN: three linked blocks.
BLOCK 1: at south end adjoining the west end of the Cathedral
Church (qv), built C12, comprises two parallel, front-gabled
ranges; the narrow south range contains the slype, originally
the monastic outer parlour, leading to the west alley of the
monastic cloister, now the Cathedral Cloister (qv); above the
slype the former chapel of the medieval lodging. In C15 the
front of the south range set back to align with rebuilt west
front of the Cathedral Church (qv). In the block's wider,
northern range, on the ground floor an entrance lobby inserted
c1200 and service rooms, originally on each of the upper
floors a large chamber, later sub-divided. Linking the first
block, at its north-west corner, to the second block is a
large C14 polygonal stair turret.
BLOCK 2: large and double-depth, originally a first-floor hall
and chamber, aligned on a north-south axis and to the west of
the first block; originally C13, but substantially rebuilt in
C14, with courtyard at rear between the block and the west
alley of the cloister.
BLOCK 3: built against the northern end of the second block,
is the eastern two bays of a C15, timber-framed, first-floor
hall aligned east-west and reduced to present length in 1649,
now known as the Parliament Room; the C15 timber-framed hall
built above an undercroft incorporating C13 masonry walls from
an earlier hall on the site. The northern side of the block
faces Miller's Yard.


EXTERIOR: two and three storeys.
BLOCK 1: to right with coped gables to both ranges; the
steeply pitched, front gable-end wall of the south range
probably rebuilt in C15 reusing C12 and early C13 features: on
the ground floor a doorway to slype with nook shafts and
moulded semicircular arch, with C15 window tracery inserted in
recessed tympanum above a richly-carved, segmental-arched door
lintel, the timber, panelled door dated 1614; on the first
floor a large, C19, early Perpendicular-style window of
three-lights, the upper part of tracery infilled. To left a
short, canted wall, with pierced, arcaded parapet, partly
infills the re-entrant angle between the fronts of the two
ranges.
The gabled front of the north range, extensively restored in
C19, of two bays; on the ground floor a C13 two-bay arcade
with shafts to the jambs and richly moulded arches, each
former opening infilled in C19 with window to left and doorway
flanked by windows to right in C13 style; on the first floor
two windows with outer jambs and semicircular arches of c1200,
each infilled in C19 with a window of four arched lights with
shafts to mullions and early C13 style plate tracery; on the
second floor two large two-light windows, with C13 outer jambs
with nook-shafts and moulded arches, the windows renewed in
mid C14 with Perpendicular tracery and central transom; each
window arch within an applied gablet, between the window
gablets the head of the steeply pitched roof gable is
decorated with a C12 blind arcade of five stepped panels with
chevron moulding in the arches.
To left of the front of the block a C14 polygonal stair turret
of three stages, with offset plinth, a string course defining
each stage, and crenellated parapet, in the lower stages in
each face of the turret a slit window placed to accord with
the ascent of the stair, and in the upper stage in each face a
single light with trefoil head; at the junction of the turret
with the south face of the second block a secondary C19 turret
supported on a corbel in the angle, the upper stage capped by
a small spirelet with finial supporting a cross.
BLOCK 2: at its south-west corner has angle buttresses in two
stages with weathered offsets and a string course at base of
crenellated parapet, in the south wall on the ground floor
three two-light C16 windows, on the first floor a large, C16,
four-light window with arched lights and flat head with
hoodmould; on the west side a projecting stack in three
stages, the upper stage and three octagonal flues added in
C19; on the first floor to right of stack a C15 two-light
window, other windows to left inserted or altered in C19.
BLOCK 3: to left comprises two bays of an end-gabled,
timber-framed, first-floor chamber, which formerly extended

further west; on the north side the upper floor is slightly
jettied above C13 stone wall with altered fenestration; the
first floor of two bays and close studding between lower and
upper intermediate rails, the north-east corner post with
carved tracery panels at the foot is supported on a small
curved, moulded timber bracket; in each bay a canted oriel
window restored c1960 on basis of surviving evidence; west
gable-end wall of C17 square panel framing built to close the
reduced hall.

INTERIOR
BLOCK 1: In the C12 southern block in the south, narrow, range
is the slype with barrel vault in three bays defined by
transverse ribs; on the upper floor the former abbot's chapel,
now an office entered from north range, also has barrel vault
with transverse ribs supported on wall shafts with scalloped
capitals, and floor paved with C15 encaustic tiles.
The north range entered through lobby formed as part of the
remodelling of the front c1200; the lobby with quadripartite
vault with transverse ribs supported on wall shafts with
stiff-leaf and trumpet-scallop capitals; in room to north of
lobby a C19 timber staircase replacing former C14 stair within
the polygonal turret, in the turret wall at first-floor level
a C15 stone lantern on corbel; on the first floor in the north
range a two-bay lobby of c1200, the walls with shafts with
capitals similar to ground floor lobby, but vaulting not
carried out; to east of first floor lobby a former chamber
with four C12 windows in the north wall, each window of two
lights with jambs enriched with billet mouldings and chevron
outer mouldings, the window heads altered.
BLOCK 2: the first floor has two chambers on the west side of
the inner lateral wall within the former C14 hall with open
timber roof; two chambers formed probably in early C16 and
comprise Laud Room to south end, and the shorter Henry Room at
north end. The Laud Room has carved and moulded panelling, in
a style similar to panelling in Red Lodge, Bristol, in five
zones of square panels with frieze between the third and
fourth zone and richly carved frieze and modillion cornice in
crowning entablature, in each of the panels a recess framed by
a semicircular arch supported by miniature fluted pilasters;
doorcases with fluted Ionic pilasters on pedestals and
entablatures, each door with panel in the centre similar to
the wall panels but larger, and a panel above carved with
radiating, fluted fan. The Henry Room has exposed timber roof
framing with C16 painted decoration, and C16 fireplace.
BLOCK 3: to north on the ground floor the beams are supported
by central row of chamfered timber posts; on the first floor
the Parliament Room with walls of exposed timber-framing and