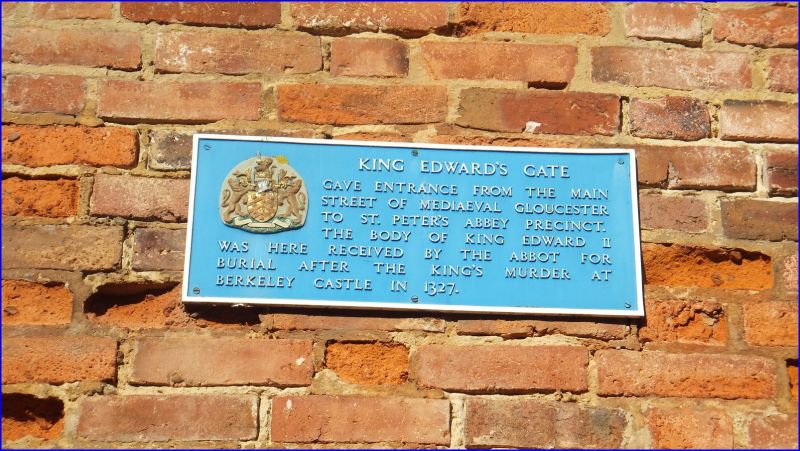 (Formerly Listed as: COLLEGE STREET No.13)

23/01/52
GV
II*
Formerly known as: Remains of Abbey Gate COLLEGE GREEN.
Gatehouse, then lodge or office, now house. Early C19 with later C19 extension; incorporates substantial remains of the former early C16 gatehouse, known as King Edward's Gatehouse. All that remains of the gatehouse is the west flanking wall, which now forms the front of the house. Gatehouse wall of ashlar with some exposed stone and brick rubble corework; later house of red brick, bituminous felt flat roof and tiled roof, brick stack.
PLAN: a single cell block built against the retained wall on the west side of the early C16 gatehouse, with an added gabled wing on the west side of the block over an open carriage shed; at the southern end of the gatehouse wall the decayed remains of its south-west corner and at the north end an octagonal stair turret; the plan of the excavated foundations of the gatehouse indicated in the street paving.
EXTERIOR: two storeys; the ashlar west side wall of the former gatehouse now the front of the house, on the face of its south end the badly weathered remains of the moulded west jamb of the former arched carriageway flanked to left by two badly decayed moulded and canopied niches; at the bottom of the upper niche an inserted stone block carved with arms. The stair turret at the north end, faced in ashlar, has an
offset plinth with weathered capping and at high level a moulded string course; in the north-east face of the turret a two-light window below the string course and a similar window above, both with chamfered jambs and mullions; in the centre of the wall the entrance doorway to the house, c1800, in a plain stone frame with pointed arch containing fanlight inset with wrought-iron Gothic tracery above the transom. The north front shows evidence of a former central infilled doorway, with three semicircular stone steps to threshold, on each side a sash, with glazing bars (3x4 panes); on the first floor two large double sash windows in openings with segmental-arched heads, one above the former doorway and one above the open front of the carriage shed.

INTERIOR: on both floors early C19 features including staircase with stick balusters and in the ground-floor front room a fireplace with reeded architrave surround.
HISTORY: gatehouse built for Abbot Parker on the south side of the Cathedral precinct opposite the south porch of the Cathedral (qv), formerly the Benedictine Abbey of St Peter. Built on the site of earlier gatehouse. The gatehouse demolished in C17 to create a wider entrance to the precinct.