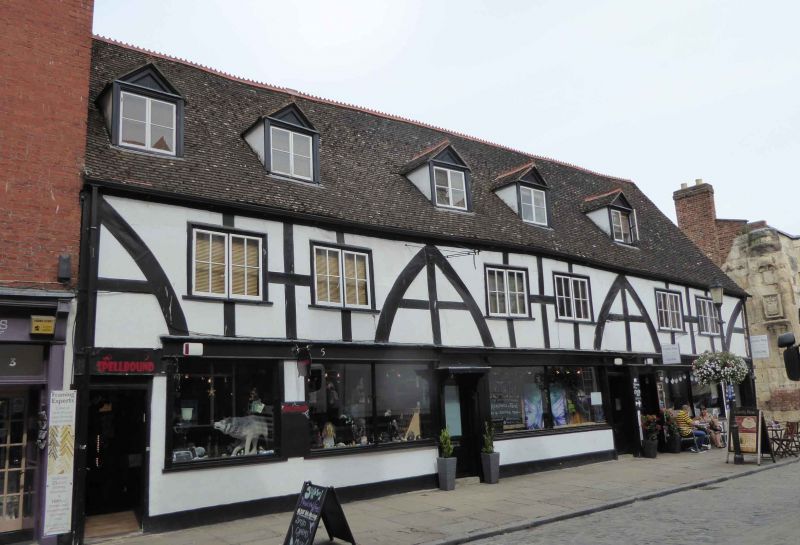 A range probably containing three houses, or three shops and
dwellings; now a row of four shops and restaurant on upper
floor. C15, many later alterations, principally in C18 and
C19, and altered and extensively restored in C20. Timber frame
with rendered panels, rendered brick, end-gabled plain tile
roof with gabled roof dormers, stone and brick stacks reduced
below roof.
PLAN: a long, lateral, range of three major structural bays,
each sub-divided into two bays. Internally divided by an
original cross wall on the line of each truss, and by a
lateral wall at about mid-point in both floors; there is some
evidence that the central major bay contained a full height
hall; the first-floor rooms opened into the roof until attic
floors were inserted before end of C17; extension at rear of
No.5 added in early C20, other additions at rear of range of
various dates.
EXTERIOR: two storeys and attic; originally on the front a
continuous first-floor jetty, underbuilt on the ground floor
in brick; shop windows and doors to Nos 5 & 7 inserted in late
C19; shop-fronts to Nos 9 & 11 inserted in C20 and a corniced
timber fascia above; on the first floor a later refacing in
render, much of the original timber-framing is preserved
behind boards applied in a rationalised pattern showing the
posts of the three major bays supported by massive, curved
tension braces tied to the posts by intermediate rails, and
each bay sub-divided by a central storey post without braces.
In each major bay on either side of the central post are a
pair of C19 casements with glazing bars (4x2 panes); lighting
the attic are five mid C19 gabled roof dormers, each with a
pair of casements with central horizontal glazing bars.
The north gable-end wall with scalloped barge boards, the
ground floor rebuilt in brick and the first floor
timber-framed with curved angle braces from the corner posts
to the gable tie-beam, and a central post; to right of the
post a two-light casement and in the gable a C18 three-light
casement with glazing bars.
The rear wall of the range, partly rebuilt in brick, is
largely concealed by later additions but there is evidence of
an original window lighting the hall in the central bay.
INTERIOR: on the ground floor some evidence of bridging beams;

on the first floor evidence of the principal beams to the
trusses supported by curved tension braces, the six trusses
with collar ties, single purlins with mortices for wind
braces, and many original rafters cut away in part for dormers
and stacks. In several units late C17 staircases from first
floor to attic, other minor C17 and C18 joinery otherwise C19
and C20 linings and fittings.
HISTORY: built as a speculative investment for the Benedictine
Abbey of St Peter; an interesting example of a late medieval
urban row of houses.
(Astam Design Partnership, Architects: Survey Report with
Drawings: Gloucester: 1986-; BOE: Verey D: Gloucestershire:
The Vale and the Forest of Dean: London: 1976-: 246).