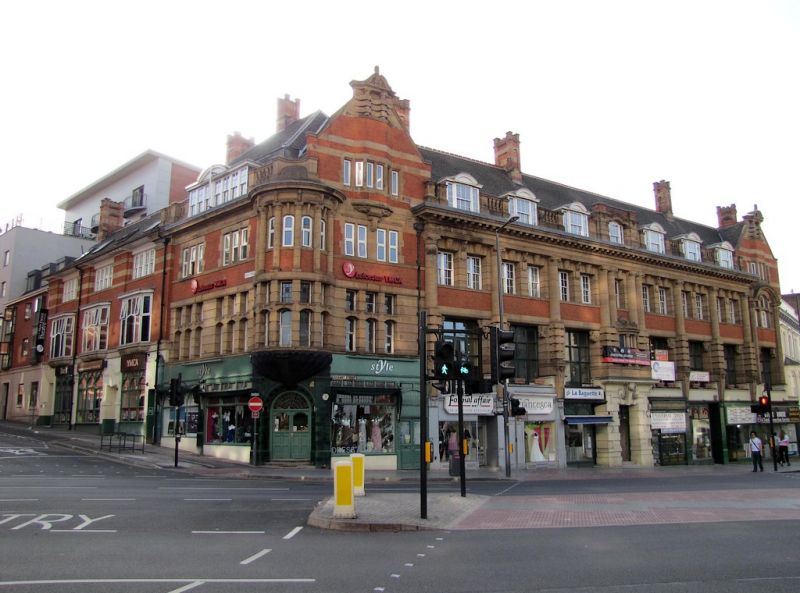 YMCA building with shops below in part. 1898-1901. By AE Sawday in collaboration with Draper and Tudor Walters. Red brick with Ketton stone dressings and probably Swithland slate roof with stone banded ornamental brick stacks to ridge and ends. L-plan with further front to left to East Street. Elaborate Late Victorian Baroque style. 3 storeys and attic. 9-window range at first floor with curving bay to left corner and 5-window range to East Street. The main facade to Granby Street has gabled end bays with 7 bays between of attached giant columns through first and second floors and supporting an entablature with bracketed cornice. The columns have blocks to the lower parts and supported on tall brackets with angel terms. The first floor windows have fine quality sculptured figures in the corners representing amongst other Architecture, Sculpture and possibly the Continents. The second floor has paired windows with rusticated surrounds and sculpted brackets. Above the cornice are dormers with section of balustrade between. The central bay has a rusticated entrance with garlanded triple keystone and an ornamental curving bay above. The shop-fronts to either side are mainly original but have some covering. The gables to the ends have similar elaborate but differing treatment and there is a columned curved bay to the left corner supported on a shell-like feature over an arched entrance. The front to East Street has ornamental frames to ground floor windows, and oriels above. INTERIOR not formally inspected, but some publicly accessible parts seen previously. The theatre has balcony supported on columns with ornamental front balustrade.