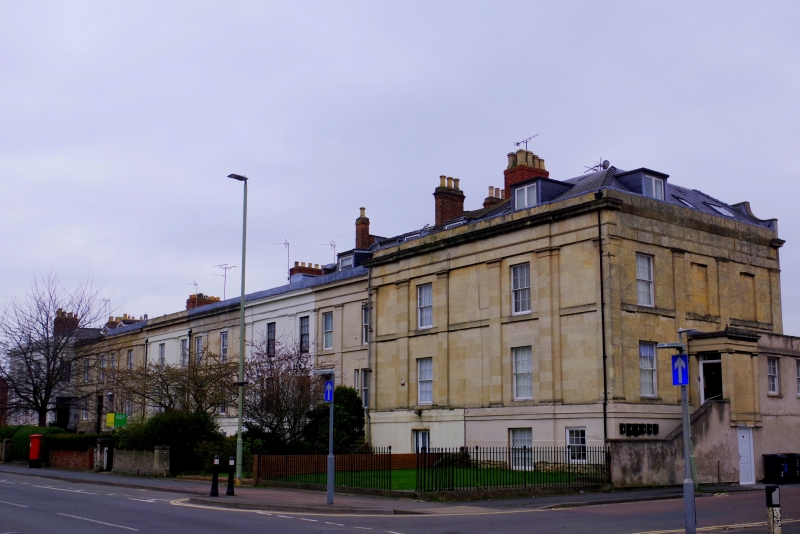 Terrace of ten houses, now subdivided as flats and several
shops. Begun 1836. By Thomas Fulljames. Brick faced in ashlar,
several houses painted; low pitched, hipped slate roofs, brick
stacks. Greek Revival style.
PLAN: a long terrace between Theresa Street and Alma Place,
set back from Bristol Road behind front gardens; comprises
three pairs of double-depth block and mirror image houses with
rear wings flanked by a unified, projecting block of two
larger houses at either end; the house at each end of the
terrace is entered from the side street.
EXTERIOR: two storeys with basements and attics. On the fronts
and return end elevations, tall basements with continuous
crowning band; on the ground and first floors a giant order of
pilasters with moulded bases and capitals defining bay
divisions, a raised band at first-floor sill level, and a
continuous crowning entablature and parapet; on the front of
the central six houses each of the mirror image pairs has two
narrow bays framing adjoining and deeply-recessed entrance
porches, and two flanking wide bays (W-N-N-W).
On the ground floor of each house its entrance doorway is
approached by a flight of stone steps rising into the porch
recess, and over the head of each porch, between the giant
pilasters, a moulded architrave supported on a console bracket
at each end; the doorways, unless altered, have timber frames
with sidelights and rectangular fanlights, some with margin
glazing bars, and six-panel doors with upper four panels
fielded.
In the wide bay of each house on the ground floor a tripartite
window with central sash and narrow side sashes, and on the
first floor a sash in each bay; all the sashes with glazing
bars (3x4 panes and 1x4 panes in sidelights), except where
replaced by later sashes in Nos 87, 89 & 91; the fronts of the
projecting pairs of houses at each end of the terrace are each
of five bays, with a slight projection to the central three
bays; on both floors sashes in the second and fourth bays, the
other bays blank.
The elevations to the side streets are each of three bays,
with a projecting, single-storey, closed entrance porch above
a basement, and with doorway facing towards the main front

approached by a flight of stone steps with flanking solid
balustrade; both porches with corner pilasters and crowning
entablatures; doorways with fanlights and six-panel doors.
INTERIOR: not inspected. Originally called Theresa Place.
(VCH: The City of Gloucester: Oxford: 1988-: 290-291).