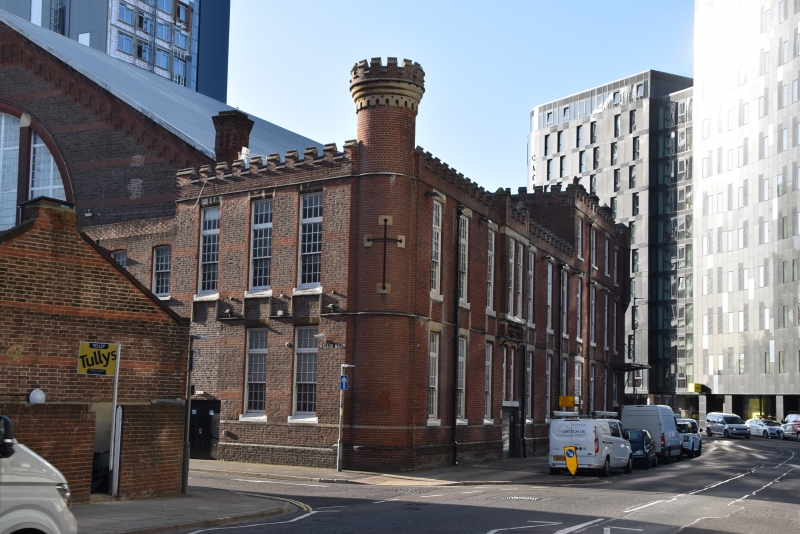 Territorial Army drill hall. 1901; by A. Bone; damaged in 1941 and partly rebuilt after the Second World War. Stock brick with bands of red brick and some Portland stone dressings; red brick rebuilt front with concrete dressings. Sheet steel roof.
PLAN: Large rectangular drill hall with range of offices at the south front and on the west side, and originally with a tower on the SW corner; the tower and the south offices were destroyed in an air raid in 1941, and rebuilt after the War without the tower.
Tudor style.
EXTERIOR: Rebuilt 2-storey embattled and curved south front, stepped back on left SW corner. The 2 and 3-storey range on west side breaks forwards on right, has embattled parapet, tall sash windows with glazing bars and stone lintels and cills; first floor corbelled out to right and with round corner turret on left NW corner with arrow-loop and corbelled castellation. Rear, north gable of drill hall has corbelled verges, large 4-light Diocletian window and splayed left NE corner with stepped parapet. East side of drill hall has six very tall segmental-headed windows with replaced glazing, the shorter second window from left has segmental arch doorway below with stepped string course above.
INTERIOR: Large drill hall with 7-bay arched braced-girder steel roof, the spandrels of the trusses filled with circles, braced-girder purlins, truss posts inscribed 'H. Handyside and Co. Ltd., Derby and London'; galleries on south and west sides of hall on iron brackets and with iron balustrades. Offices on south and west sides, one on first floor of west side has cable-moulding to dado.