Abbey Church of the Holy Cross 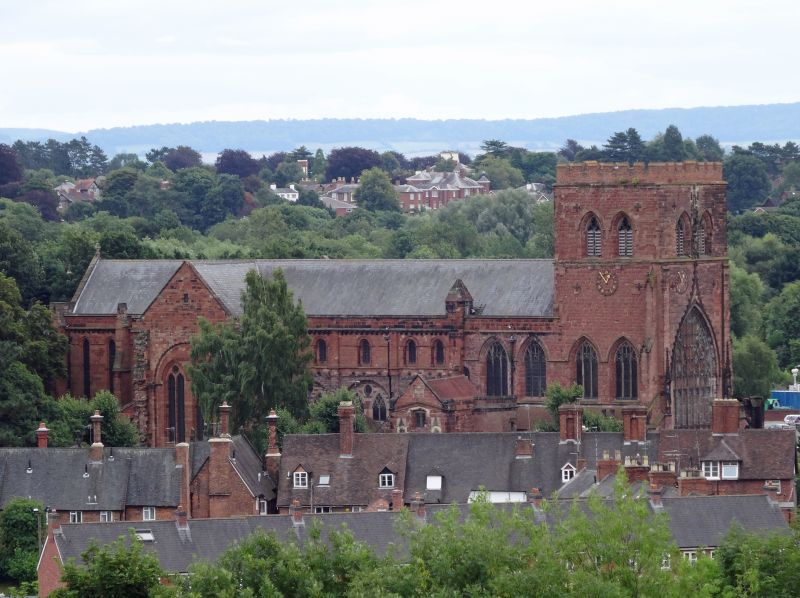 EXTERIOR: massive three-stage west tower, the masonry largely original, but the door, with deep moulded Transitional-style archway, and seven-light late Decorated-style window above, renewed in the earlier C19 restoration. Ogee hoodmould over window, which reaches string course separating second and third stages of tower. Angle pilasters have niches with statues at second stage. Paired bell-chamber lights in upper stage, each side of central statue in niche. Brick embattled parapet above. Decorated-style windows in north and south walls of tower form part of the clerestory-window range.

Aisles largely original masonry, with C19 parapets and late Decorated style tracery in three-light windows, restored. Small section of medieval north aisle to west of porch, with two three-light Decorated windows and narrow round-arched doorway. Two storey porch largely Perpendicular, possibly incorporating earlier structure: the cylindrical responds are apparently C12, though the rest of the doorway is late medieval, with square moulded outer archway with quatrefoil spandrels. Enriched timber door dated 1640. Two tiers of two-light windows above, with mutilated hoodmoulds, flanked by niches. Aisle includes substantial remains of original construction, including much of the lower walls and a string course. The windows are late Decorated and inserted, and the three cross gables of the roof are probably C15 or C16, replacing the original lean-to oof over the aisle. Triforium largely the work of Pearson, filling in original plain round-arched arcade with banded red and white sandstone, and paired Early English-style windows. Clerestory also as renewed by Pearson in a Romanesque style. Corbel table also C19.

Transept refaced and partly rebuilt by Pearson, truncating the original line of the building which is marked by a blind full-height archway in the north wall, with paired plate traceried windows. Stumps of original east and west walls are visible, that to west continuing beyond the present building line, and incorporating the remains of a window.

Transept chapel and chancel entirely as rebuilt by Pearson, the chancel having narrow Early English-style lancet windows high up in north, south and east walls.

South side follows the same general scheme as north, the westernmost bays later medieval and restored, the easternmost C11 or C12 with modifications by Pearson according to the same design as the north wall. South doorway incorporates responds with cushion capitals from a C12 door, but has been restored.

FITTINGS: many of the furnishings date from the Restoration, including the pulpit and the font canopy, and the altar piece,a triptych with hinged traceried panels.

MEMORIALS: series of tombs reflect the long history of the building, including worn effigy of Roger de Montgomery its founder, and the recumbent figure of a priest in the south aisle, and three monuments in the west end of the north aisle, showing the development of style in three pairs of recumbent figures on bases, dated 1544, 1571 and 1612. A number of other effigies in the south aisle are not in situ. There is also a long series of wall tablets, spanning from the mid C17 to the early C19. In the north aisle, the remains of the C14 shrine of St Winefred, which were erected here in 1933, and comprise two sections of wall with traceried panels and some figures of saints in niches.