A Grade II Listed Building in Dore and Totley, Sheffield 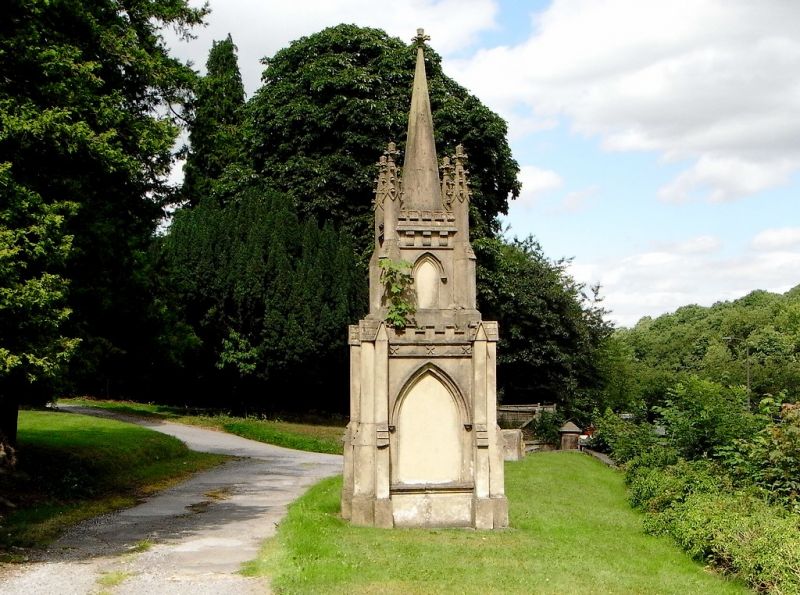 Commemorative monument, 1853 to the design of an unknown artist for the Sheffield and Rotherham Licensed Victuallers Association. Re-sited in 1879 after the almshouses with which it is associated were rebuilt in a new location.

Commemorative monument, 1853 to the design of an unknown artist for the Sheffield and Rotherham Licensed Victuallers Association. Re-sited in 1879 after the almshouses with which it is associated were rebuilt in a new location.

DESCRIPTION
Not inspected, information from other sources. The memorial stands in front of the Licensed Victualler’s Almshouses in line with the central hall. It is designed in a Gothic Revival style as a square tower with a crowning spire. The high base has a plinth and crenelated parapet, with angle buttresses and four moulded arched panels.

The panel facing east towards the road has the inscription: THIS MONUMENT / WAS ERECTED TO THE MEMORY / OF THE LATE / ALDERMAN THOMAS WILEY, / BY THE VOLUNTARY SUBSCRIPTIONS OF THE / MEMBERS AND FRIENDS OF THE SHEFFIELD / AND ROTHERHAM LICENSED VICTUALLERS / ASSOCIATION, TO RECORD THEIR RESPECT AND / ESTEEM FOR HIS MUNIFICENT DONATIONS TO / THEIR ASYLUM, HE BEING THE FIRST DONOR TO / THIS INSTITUTION AND BY HIS SPIRITED / EXAMPLE CAUSING A NUMBER OF LIBERAL / AND BENEVOLENT GENTLEMEN TO SUBSCRIBE / SUFFICIENT FUNDS TO ERECT THE / ADJACENT BUILDINGS. / ANNO DOMINI 1853 / THIS MONUMENT WAS REMOVED FROM THE / OLD INSTITUTION AT GRIMESTHORPE TO ITS / PRESENT SITE ON THE COMPLETION OF / THESE BUILDINGS 1879.

Above is a smaller pedestal with diagonal buttresses topped by crocketed spires with four arched panels with hood moulds. Set back is a tall, octagonal spire with a crocketed finial.

Thomas Wiley was an alderman, wine and spirit merchant, and news agent in mid-C19 Sheffield. The 1849 General Directory of Sheffield listed his business premises as (old No 12) 25 and 27 Old Haymarket, and he was also listed for the Sun Tavern on Old Haymarket. His memorial was commissioned by the Sheffield and Rotherham Licensed Victuallers Association and was originally erected in Grimesthorpe in 1853. It stood outside the Association’s asylum (almshouses) for their fellow tradesmen who had been 'unfortunately overtaken by old age, adversity, and misfortune'. It recorded the victuallers’ respect and esteem for Wiley, who had been instrumental in their fund-raising efforts to build the asylum, which had been built in 1848 and comprised a row of neat cottages in the Tudor style housing six or seven pensioners and intended to be enlarged when funds were sufficient.

As the fields surrounding the Grimesthorpe asylum were built upon by industrial premises a decision was made to move the asylum, rather than enlarge it in its original location. The Association purchased five and a half acres and two existing houses in Totley for £6,000. The asylum (Licensed Victuallers Almshouses, Grade II, NHLE: 12713545) buildings were erected for another £6,000 in 1878 and consist of 12 houses with a central hall for association meetings and a library. The memorial was moved to its present location outside the new asylum buildings in 1879 and its inscription updated to record this.

The monument to Thomas Wiley, erected in 1853 and re-sited in 1879 after the almshouses with which it is associated were rebuilt in a new location, is listed at Grade II for the following principal reasons:

* as a handsome Gothic Revival stone monument designed as a square, two-stage, buttressed and crenellated tower with crocketed corner spires and a tall crowning octagonal spire and bearing a heartfelt inscription of respect and esteem to Alderman Thomas Wiley.

* the monument celebrates Wiley’s part in the construction of almshouses by the Licensed Victuallers’ Association for their poor elderly and infirm associates, a long-standing tradition of such provision by trade guilds which dated back to medieval times.

* the monument has associative group value with the listed Licensed Victuallers’ Almshouses in front of which it stands.