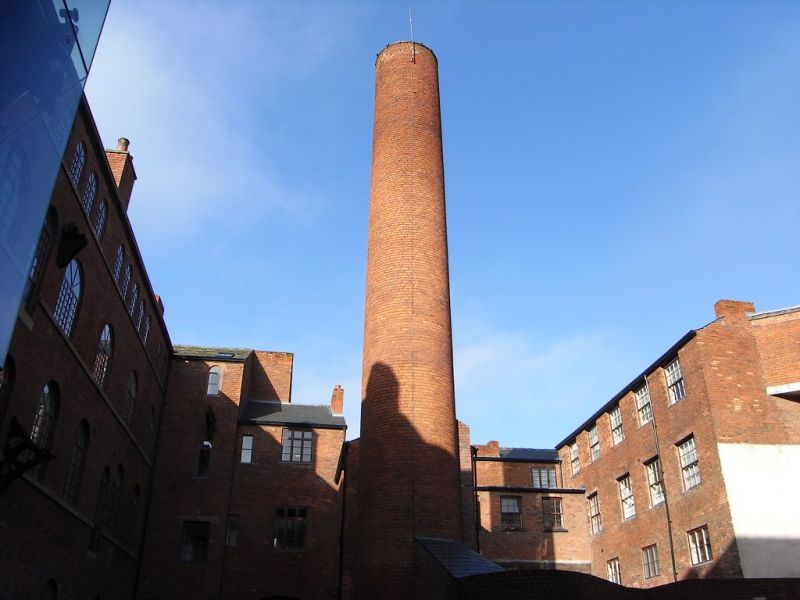 Includes: No.41 EYRE LANE.
Includes: No.30 BROWN LANE.
Steel and cutlery works. c1835 and c1875. Brick with stone
dressings and slate roofs with various stacks. Square
courtyard with workshop blocks on each side.
EXTERIOR: 4 and 3 storeys; 30 x 24 windows. Arundel Street
front, 4 storeys, has 30 segment-headed 2-light glazing bar
casements, several of them blocked, with irregularly spaced
blanks. Above, 28 similar windows, with irregularly spaced
blanks and in the 12th bay, a loft door. Above again, 29
similar windows, some blocked. Ground floor has to left of
centre a cart entrance with rusticated stone surround,
keystone and cornice, and double board doors. To its right, a
round-arched pedestrian entrance. To right, 7 round-headed
cast-iron glazing bar casements. To left, 2 similar windows,
then 2 segment-headed 3-light wooden cross casements.
Right return, to Brown Lane, has a block to left, 4 storeys;
17 windows. First floor has 5 segment-headed 2-light
casements, then at a lower level, a smaller window, then 3
altered segment-headed windows. Above, 5 segment-headed
casements, then a 2-light casement at a lower level, then 3
flat-headed 3-light casements, and finally eight 3-light
casements. Above again, 5 segment-headed casements, then a
single window, then 6 plain sashes. Ground floor has to left,
2 plain sashes, then a small casement set higher, then a
larger boarded up window, then 5 small windows with a door
below the left one. To right, a gable with 3 large glazing bar
casements on each floor, with a door below and to the right.
To right again, a slightly recessed bay, 2 storeys, with a
3-light casement and below it, a double board loading door
with cast-iron fanlight.
Rear elevation, to Eyre Lane, has to left a block c1835, 3
storeys; 8 window range. Windows are mainly glazing bar
sashes, several of them partly reglazed. Above, 10 similar
windows. Ground floor has a central elliptical arched doorway
with keystone and rusticated surround, flanked to left by 4
sashes. To right, 2 sashes, then a similar doorway with a
blocked window and C20 door inserted. To right again, mid C19
block, 4 storeys; 4 window range. 4 large segment-headed
casements to the first floor, flanked to left by a smaller
window, and above, 4 similar windows. Above again, 4 smaller
segment-headed windows.
Inside the courtyard, front range has sillbands to the upper
floors and 3-light casements to the first floor with 2-light
casements above, all with segmental heads. To right, an
external wooden stair to a first floor door. C19 block to
left, 4 storeys; 11 window range. Sillbands on the upper
floors, and round-arched windows. First floor has pairs of
3-light windows alternating with smaller 2-light windows, all
with radial fanlights. The smaller windows light internal
staircases. Above, to left, 4 large 3-light cross casements,
then a smaller 2-light casement, then 4 larger 3-light
casements, 2 with fanlights. Above again, 19 smaller 2-light
casements, many reglazed, some with fanlights.
Right side, c1870, 4 storeys; 9 window range. Segment-headed
wooden casements arranged in groups of 3, the central window
in the left group blocked. Above, similar fenestration with
smaller windows. Above again, 6 large plain sashes. To left,
an earlier C19 block, set forward. 3 storeys; 5 window range.
First floor has 4 glazing bar sashes, the left one covered by
an adjoining building, the third one blocked. Second floor has
5 similar sashes, the left one reglazed. Irregular rear
elevation has to left, blocks of 4 and 3 storeys, single
windows. In the centre, a 3-storey gable facing projection. In
front of this, a tapered round factory chimney, linked by a
curved wall to the buildings to right. Originally, a communal
boiler house supplied steam power to the workshops around the
yard, apparently by belts and pulleys on the outside walls.
This system was replaced by electric power in the 1950s.
INTERIOR: west block has in the ground floor brick elliptical
arches on round cast-iron columns, and stone dogleg stairs
with hoist trapdoors in the landings.
This building is an important example of the courtyard
workshops characteristic of Sheffield. It was designed for the
manufacture of cutlery, and some cutlery processes are still
carried out here.