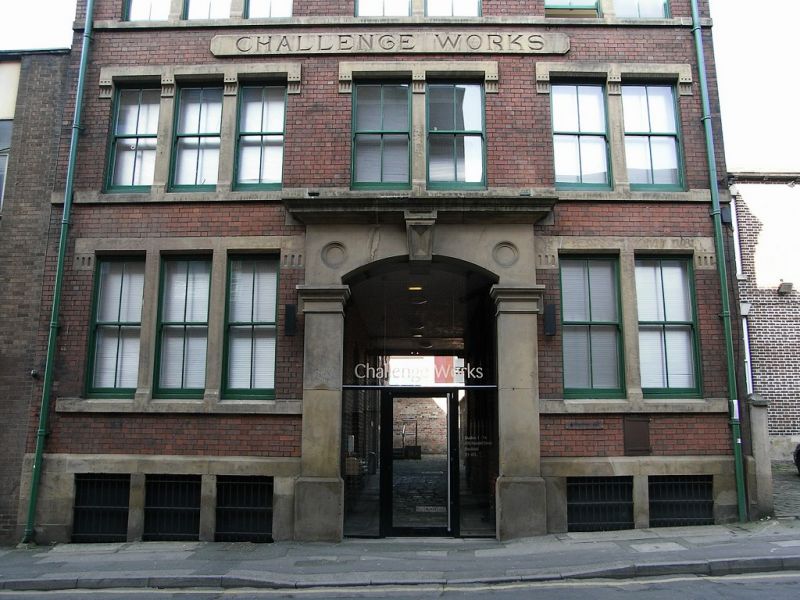 Former edge tool manufactory, now workshops. c.1880, with late C20 alterations. Built for Louis Osbaldiston and Co, saw and file manufacturer and merchant. Red brick with ashlar sandstone dressings, gable and ridge stacks and a slate roof covering.
PLAN: U-shaped courtyard plan, with frontage range to Arundel Street and rear yard enclosed by parallel rear workshop ranges.
EXTERIOR: Asymmetrical 3-bay frontage range to Arundel Street, 3 storeys above a basement, with central vehicle entrance within massive ashlar surround, and shallow-arched head with keyblock and cornice. The opening has tall 8-panel double doors and gives access to a setted covered way, with arch-headed loading doorway with double doors to the right, and single doorway to the left. Flanking the entrance are tall 2 and 3-light ground floor window openings within ashlar stone surrounds, each light with a sash frame. Stone sills form a band at each level, with the windows diminishing in height at each ascending level. Basement lights at footway level repeat the pattern of openings above, but are boarded up. Between the first and second floor windows, a plaque with incised lettering which reads ' CHALLENGE WORKS '. Bracketed eaves cornice between elaborate moulded ashlar kneelers to gables. Rear elevation with 6, 6 over 6-pane sash windows on stone sills to the upper floor and a 2 storey lean-to extension to the centre bay. Single storey workshops with monopitch roofs, front wall stacks, multi-pane casement windows and vertically-boarded doors extend north westwards from the frontage range on both sides of the yard. Extending from the north-east workshop range, a 2-bay 2 storey range with a pitched roof and ground and first floor openings.
INTERIORS: Not inspected, but known to retain extant features, including, within the frontage range a staircase leading from passage doorway on south-west side and a first floor office with partitioning and built-in cupboards. Ground floor hearth to north-east room with C19 cast-iron range, and first floor hearth within plain surround to south-west room. South-west workshop range equipped with in-situ stamping machinery and line shafting.
HISTORY: Challenge Works, built as an edge tool manufactory with workshops, office and warehouse, appears to have rapidly evolved into a multi-occupancy site, with an electro-plating company sharing the site in 1888. The Goad Fire Insurance plan of 1896 identifies various trades being carried out on site, and the presence of tool forges set behind the street frontage range, itself identified as office and warehouse.

Challenge Works is a significant survival in a once densely populated manufacturing quarter of Sheffield. It stands alongside the earlier C19 'Little Mesters' workshops (No. 92 Arundel Street) and the master's house associated with them (No.92A Arundel Street). Together with them, Challenge Works forms a now-rare ensemble of small and medium-sized metal-working factories which characterised many parts of Sheffield in the C19, a period when its products and skills acquired their international reputation.