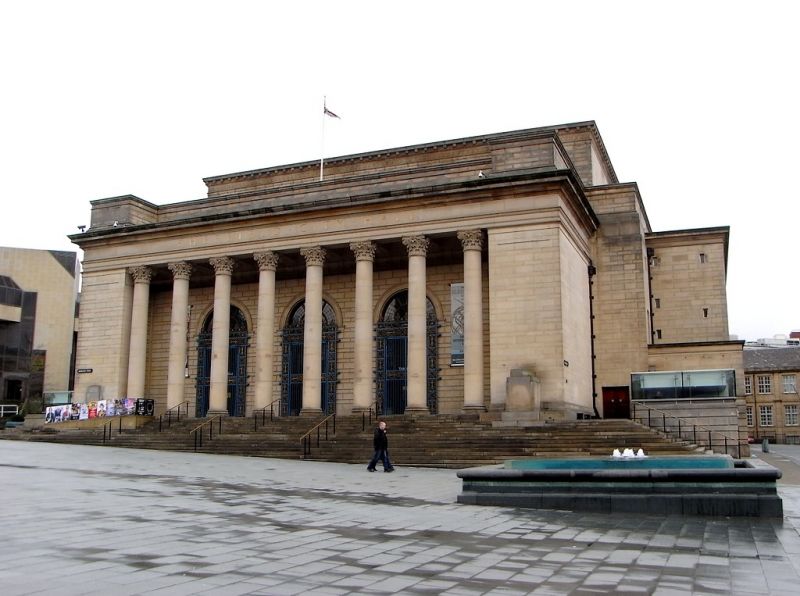 Public hall. 1920-1934, with alterations 1984. By E Vincent
Harris. Ashlar with asphalt flat roofs. Classical Revival
style.
EXTERIOR: plinth, moulded cornices, coped parapets. 3 storeys
plus basement; 11 x 11 bays. Windowless cubic central block
with modillion cornice with lower attachments in 2 steps on
each side. South front has a portico of 8 giant Corinthian
columns in antis, the entablature carried around the pylons to
each side. Under the portico, 3 moulded round-arched entrances
with glazed screens and fanlights, protected by crested
wrought-iron gates. 3 storey returns have cross casements on
the lower floors, the ground floor windows having moulded
surrounds and cornices. Upper windows are smaller 2-light
casements. Right return has a rusticated basement with
multiple keystones to the openings, and in the centre, 3
round-headed entrances with rusticated surrounds. Above them,
3 second floor windows with balustraded balconies. At each
end, a corniced single storey square pavilion with a
round-headed doorway with rusticated surround. Left return has
similar fenestration without a basement, and a small central
door flanked by single larger doorways with fanlights and
coats of arms on the transoms. On either side, 4 windows, and
beyond, a plain double doorway. At each end a square pavilion
with round-headed doorway, like those to the right return. At
the rear, a rusticated apse with giant square Corinthian
columns rising above the level of the building and carrying a
heavy entablature. In each bay, a square window. In the
centre, 3 double doors with keystones, flanked by a cross
casement in each bay.
INTERIOR has a full width round-arched entrance hall with 3
saucer domes with decoration by George Kruger Gray, and a
balustraded barrel vaulted gallery. Oval main hall has 2 tiers
of horseshoe balconies and elaborate shallow domed coffered
ceiling with large oval rooflight. Semicircular Memorial Hall
has a balcony with end piers topped with gilt lamps in the
form of animals. Under the balcony, a continuous strip of
square openings and 3 doors. Basement ballroom has a vaulted
foyer with a double arcade of giant Doric columns, 3 x 7 bays.
On either side, similar 7 bay arcades with square end
pilasters flanking round-arched entrances. Entrance has 2
piers in antis, flanking the double doors. Enriched cross beam
ceiling with 6 louvred lamps. Side passages have 3 pairs of
doors leading to similarly decorated side rooms. Corridors
have faience tiling.
(The Buildings of England: Pevsner N: Yorkshire: The West
Riding: London: 1967-: 453).