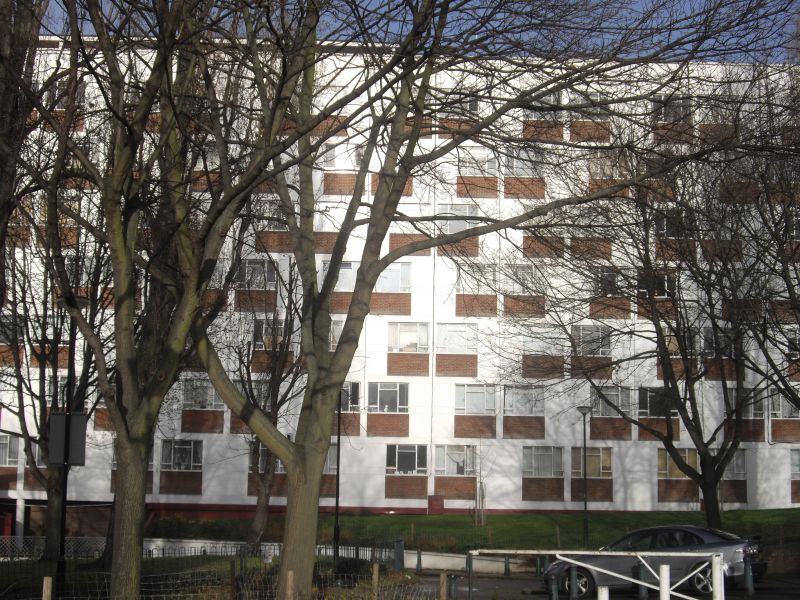 Block of 130 flats and maisonettes. First scheme designed 1946, present design from 1949 onwards, built 1951-4, by Skinner, Bailey and Lubetkin. Reinforced concrete box frame construction, clad in pre-cast storey-height aggregate panels finished with Hoptonwood stone chippings, an early use of such a material but now painted, and brick panels under windows. Flat roof y-shaped plan. Two wings of one -and two-bedroom flats, the third (to the south west) with three-bedroom maisonettes, all with balcony access reached off lifts and stairs in central linking drum. Eight storeys. The elevations to the flats demonstrate the flexibility of the box frame construction with alternating pairs of windows and panels on alternate floors. On the gallery side there are alternating patterns of panels and stations. All windows of metal frames with opening side casements and top lights. Rooftop canopies, tapering and thin, to each range. Entrance reached under angled canopy in centre of blocks, leads to remarkable entrance hall. Mural by Peter Yates depicting elements of Finsbury's history and coat of anI1S, arranged as a diorama behind balustrade. Beyond, the centre of the drum filled with staircase of straight flights rising to central circular landings and onto galleries round the edges, at alternating angles. The result is Lubetkin's most powerful circular ramp since the Penguin Pool, adapted for humans. Proscenium openings at each landing frame a different London view. Plaque commemorating the opening of the building in 1954. Interiors of flats not inspected but not thought to be of special interest. Bevin Court was the last of three schemes by Skinner, Bailey and Lubetkin for Finsbury Metropolitan Borough, where they had first been commissioned to design new housing in 1937. It replaced bombed housing in Holford Square, and Lubetkin was particularly interested in the fact that it had been home in 1902-3 to Lenin with whose ideals he had strong sympathies. In 1942 he designed a bust to commemorate Lenin's stay at N 0. 30 Holford Square, which stood in a square frame in the park opposite. Regularly vandalised, the memorial was to have been incorporated in the replacement building, to be called Lenin House, but in 1951 or earlier, Lubetkin had it buried in the foundations of the new building to prevent its further mutilation. The final irony came with a demand to re-christen the block after Britain's first foreign secretary of the Cold War; Francis Skinner commented that they only had to redesign two letters of the sign. Lubetkin's first scheme here respected the original form of the square, with a series of blocks cranked to avoid a 'northern aspect. But it proved too expensive within the cost constraints of 1948, and the scheme was revised in 1949 to place the units witl;1in a single block with public space around. The novel Y -shaped plan ensured there was no northern aspect; the plan was repeated again by Lubetkin in his Dover Estate for Bethnal Green MB, won in competition in 1951, but less powerfully than here. The staircase is his most idiosyncratic post-war achievement. Of all his work it best demonstrates his belief that, 'a staircase is a dance'. It betrays Lubetkin's background in Russian Constructivism, in the work of Melnikov and Leonidov, but can be seen too as a piece of Baroque geometry given the added power of concrete construction. Lubetkin was fascinated by the geometry of what he called the 'baroque' squares of the area, and this was a personal response to what was in fact Georgian town planning. Holford House gave the scheme a public face onto Percy Street from the south. (Berthold Lubetkin, Architecture and the Tradition of Progress: John Allan: London: 1992: PP415-27).