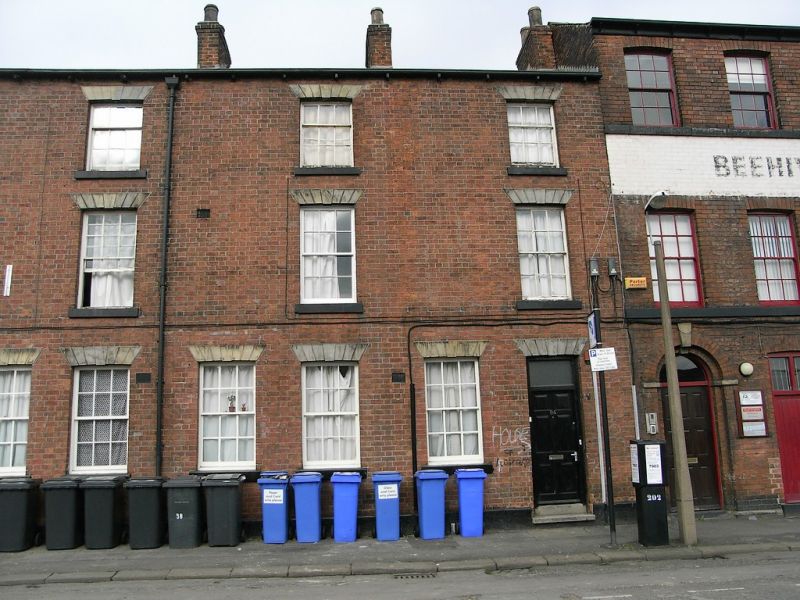 PLAN: Row of four properties, with two deeper back-to-back houses with central passageway through to rear yard at left, south-west end (No.100), through house with central passageway and outshot to rear (No 96), and through house (No 94) at right, north-east end. No.100 retains plan of unconnected front and rear houses comprising a single room on each floor, reached by narrow staircases built end-to-end to form the party wall between the properties. The building previously No.98 is originally similar, now altered to enable insertion of modern staircase between front and rear rooms (No.98 and no.100 are now known as No.100).

EXTERIOR: Built in two contemporary phases, with straight joint between No.96 and the building previously known as No.98, and similar treatment of detailing to whole seven-bay front elevation. Three storeys over cellars, built in Flemish bond with a plinth and wooden modillion eaves to double-pitched roofs. The gable wall of No.94 abuts Beehive Works (q.v.) to the right, and the gable wall of No.100 is rendered as the adjoining building has been demolished. Windows have stone sills and wedge lintels, with twelve-pane sashes on the ground and first floors and nine-pane sashes on the second floor.

The two buildings forming No. 100 have a symmetrical front elevation of two wide bays on the first and second floors each with a single window to the outer edge. The ground floor has a central round-arched entry with recessed modern door and overlight. Flanking the entry are two doorways, each with two stone steps, pilaster door surrounds, modern panelled doors with overlights, and a window beyond. The first and second floors of No.96 is of three window bays, with two wider window bays to No.94. The ground floor of No.96 has a central round-headed entry, with modern panelled door and overlight, a closely-spaced doorway (blocked) and window to the left, and two closely-spaced windows to the right. No.94 has three-ground-floor windows with a doorway in the right-hand bay, with stone wedge lintel, modern panelled door and overlight.

INTERIOR: Only No.100 was inspected internally. Features of note include moulded architraves, kite winder stairs, original four-panelled doors to the stair recesses, panelled cupboards to the side of fireplaces, cast-iron fireplaces, and plain moulded ceiling roses.

HISTORY: Much of the area around Milton Street was still undeveloped in the mid C19, but by the time the Ordnance Survey map was published in c1890 the neighbourhood had been completely built up with a combination of factories, most commonly cutlery or edge tool works, and terraces and courts of workers' housing. Nos. 94, 96, 100 Milton Street was built adjoining Beehive Works (known in C19 as Milton Works), and included a pair of back-to-back houses, a housing type banned by a local bylaw in 1864.

SUMMARY OF IMPORTANCE
This is a row of mid-C19 urban workers' housing. Whilst the industrial expansion of the C19 economy of Sheffield saw a parallel expansion in mass building of urban workers' housing, relatively little has survived subsequent C20 slum clearance programmes. This row is therefore an unusual survival in the city. The integrity of the building is retained by the intact and simply detailed front elevation, and although there have been some internal alterations, sufficient remains of the plan form to show that the row incorporates a rare survival of back-to-back housing at No.100. This type of plan-form was often adopted in C19 industrial towns as an expedient way of housing the rapidly growing population, though later condemned as unhealthy, banned from construction by various local bylaws, and often demolished to facilitate regeneration. In addition, a severe decline in the manufacturing and processing of steel in Sheffield in the late C20 has resulted in the loss of many C19 works. Nos. 94, 96, & 100 Milton Street remain closely juxtaposed with two contemporary integrated cutlery works, namely Beehive Works (q.v.), and Taylor's Eye Witness Works (q.v.) with which they have strong Group Value. The three components, which run along the north-west side of Milton Street, form a miniature mid-late C19 industrial landscape of exceptional completeness and legibility, with the presence of the housing complementing the setting of the works and enhancing their context.