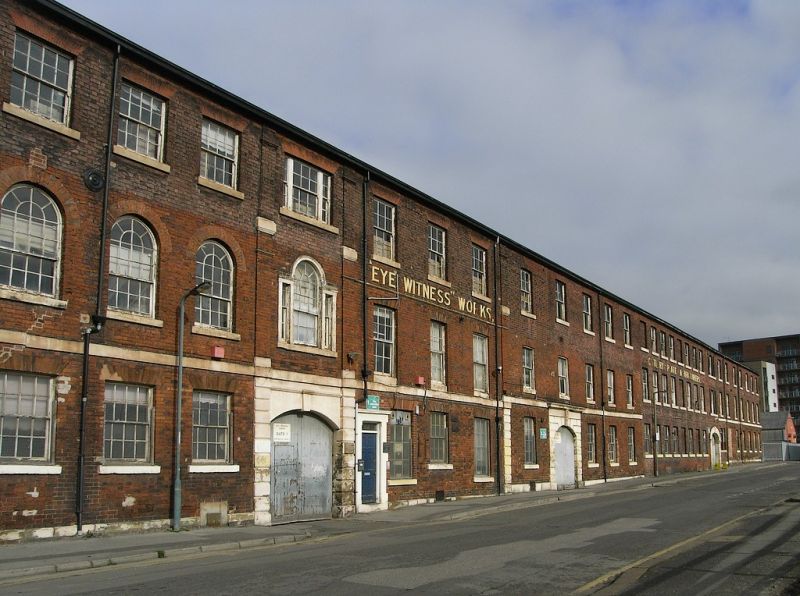 Exclusions:
The 1950s block on Thomas Street and Egerton Lane is not of interest.

EXTERIOR: Three-storey, thirty-bay front range comprising four distinct blocks
unified under single double-pitched roof.
First phase: nine-bay building at left, south-west end. Outer bays defined by strip pilasters with rusticated stone quoins on ground floor. Stone plinth and first-floor band. Entrance bay in bay six defined by strip pilasters with rusticated stone piers to cart entrance on ground floor. Cart entrance with segmental-arched head and keystone, with double board doors, Venetian window on first floor and tripartite hung-sash on second floor. The first five bays have eight-over-eight hung-sash windows with stone sills, gauged brick lintels on ground and second floors, round-headed on first floor. Bays seven to nine have six-over-six hung sashes, taller on the ground and first floors. Ground-floor window in bay eight is alteration from original doorway; doorway in bay seven is later insertion. Door case with plain pilasters and cornice, and six-panel door with overlight. In first bay is coal chute. To right is five-bay range built as two storeys and raised to three by 1905. Stone plinth and first-floor band. Cart entrance in bay two with segmental-arched head, console keystone, and rusticated surround, with double board doors. Ground-floor windows are six-over-six hung sashes with two-over-two hung sashes on upper floors. All windows have stone sills and brick lintels. To right is nine-bay range. Cart entrance in bay nine has a depressed arch, rusticated stone jambs, imposts, and voussoirs, with double board doors. Above is a tripartite sash window with brick mullions on first and second floors. Windows in bays one to eight are two-over-two hung-sashes with stone sills, some blind. Seven-bay range at right, north-east end, built as two storeys and raised to three by 1905. Stone plinth and first-floor band, which continue on gable wall on Thomas Street. Two single-light washroom windows in first bay on ground floor. Windows in bays three to seven are six-over-six hung sashes, with two-over-two hung sashes on first and second floors. All windows have stone sills and brick lintels. Blocked doorway, originally window, in bay two. Front has applied letters (some missing) reading `EYE WITNESS' WORKS CUTLERY PLATE MANUFACTURERS. Workshop range on Headford Street: three-storey, sixteen-bay range of mid C19 date. Headford Street elevation rendered. Widely spaced, irregular fenestration on ground floor, some altered, with closely spaced windows (blocked in 14th and 15th bays) on upper floors. All with replacement casement windows. South-west workshop range on Egerton Lane: three-storey, ten-bay range, with double-pitched roof hipped at south-west end with roof on Headford Street. Ground floor altered by insertion of doorways and blocking of some windows, but original two-light glazing bar casements with stone sills and brick lintels in bays one to four. Upper floors have eight closely spaced windows with two widely spaced windows in bays eight to ten. All are similar two-light glazing bar casements. To left is four-storey workshop range with gable wall on Egerton Lane. Set into the west corner of the building is an integral industrial chimney stack, with a tall, square brick base, capped by a stone plinth from which an octagonal brick stack rises (now slightly truncated). On its south side is a wide brick stack built into the eaves of the yard elevation, now truncated. Gable wall has two-light glazing bar casement windows on each floor (with modern casements on third and fourth floors) with stone sill bands and brick lintels.
To left is site of single-storey boiler house, with three-storey workshop range to its rear, hipped at its right, south-west end with gable stack at left, north-east end. First floor of Egerton Lane elevation has four large, four-light glazing bar casement windows. Second floor has ten closely-spaced two-light glazing bar casement windows. To left, on Egerton Lane, is a three-storey, nine-bay workshop range dating from the last quarter of C19. Original blind ground floor, now with inserted openings, some blocked. The upper floors are lit by closely-spaced, two-light glazing bar casement windows. Workshop range on Thomas Street: a three-storey range built in 1950 with a parapet hiding the roof. Six bays on Thomas Street, canted corner bay and four bays on Egerton Lane. Bay one on Thomas Street is taller stair bay with doorway with concrete surround, with recessed nine-pane and twelve-pane metal casements above, with circular date stone. The staircase in bay four on Egerton Lane is lit by three tall casement windows. Windows in bays two to five, the canted corner bay and bays one to three on Egerton Lane have wide multi-pane metal casements, those on the ground floor with concrete sill and lintel bands. Courtyards: the south-west courtyard has a mid C20 glass-panelled roof, creating additional workshop space. The narrow middle courtyard has a twin-gabled range to rear with inserted first-floor loading door and two-light glazing bar casement windows with stone sills and segmental brick heads. Large rectangular courtyard to north-east flanked by three-storey ranges with two-light and three-light glazing bar casements. Loading doors on first and second floors of cross range to south-west side of courtyard. Square attached chimney to south. Two-storey C20 block added within yard towards east side, fenestration altered.
The three unequal yards around which the Eye Witness Works are arranged are not equal in size and have very different characters. The south-western yard is now glazed over to house presses; the central yard is largely filled with buildings leaving only a comparatively small area open to the sky. The north-eastern yard is largely open although one end of it is now occupied by a two-storey free-standing building.

INTERIOR: The buildings have developed to contain offices, storage and packing rooms on the Milton Street range. The traces of hand forges exist in the Headford Street range with workshops over. Traces of grinding wheels are found in the workshop range with gable wall on Egerton Lane which also has workshops over. Workshops are also found in the upper parts of all ranges along Headford Street and Egerton Lane. These light workshops in the upper storeys of the complex are largely intact with glazing on both sides, although most of the work benches which line these rooms have been replaced over time. At ground level the requirements of heavier machinery have resulted in substantial alterations including the removal of walls and doorways. All interior spaces show extensive adaptation and change often retaining fragments and traces of former functions. Particular internal features to note are the jack-arched first floor in the workshop range with gable wall on Egerton Lane, the mid-C19 fireplace in the original board room on the first floor at the south end of the Milton Street frontage and remnants of line shafting in a number of spaces, in particular towards the centre of the complex.

HISTORY: Eye Witness's striking trademark of a wide-open eye was granted to one John Taylor, a cutler who worked in St Paul's Road, Sheffield, in 1838, and is believed to derive from the line `no eye hath seen better' in Shakespeare's King Henry IV. His business was taken over by Thomas Brown Needham, who subsequently joined forces with James Veall in Eye Witness Works, which had apparently had a previous occupier and was not built for them. In 1879 Walter Tyzack joined the business which became Needham, Veall and Tyzack, renowned for their Eye Witness knives, though also manufacturing a range of pocket knives, table cutlery, scissors and, later, plated goods. In 1975 the renamed Taylor's Eye Witness was absorbed into Harrison Fisher and Co Ltd. It continues to manufacture Kitchen Devil knives at Eye Witness Works.

REASONS FOR DESIGNATION
Eye Witness Works is designated at Grade II for the following principal reasons:

* It is an important survivor of an integrated cutlery works associated with the internationally significant Sheffield cutlery industry.
* It retains the layout and building types of such a complex, including those designed to house a specific process, in contrast to the more generic cutlers' workshops.
* The buildings at Eye Witness Works retain fragments relating to earlier functions which enable a level of understanding of the use and history of the buildings.
* It has strong Group Value with Beehive Works, Milton Street, and Taylor's Ceylon Works, Thomas Street.