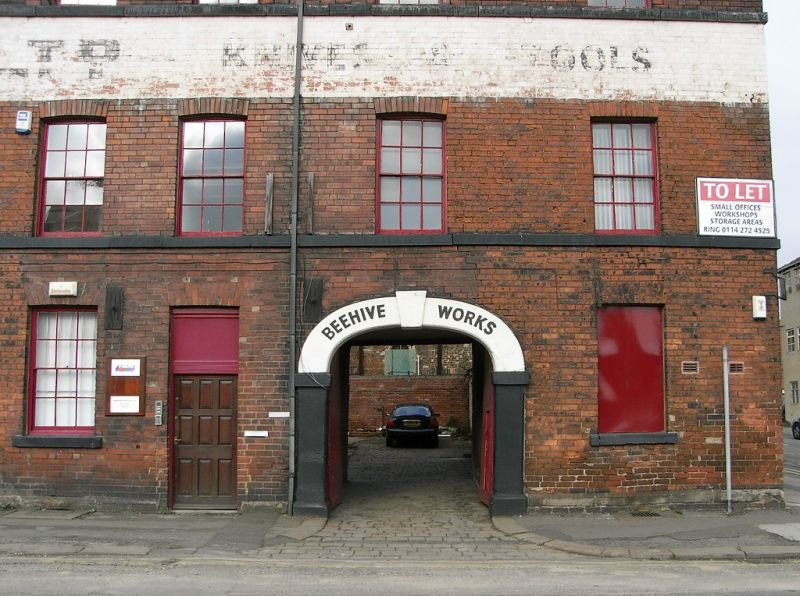 EXTERIOR: Front office and showroom range of three storeys, with cellar beneath bays nine to twelve from left, south-west end. Eighteen bays built in three phases in a south-westerly direction. Straight joints to first-floor height between bays eight and nine, and between bays twelve and thirteen, indicating that the earlier parts of the range were of two storeys, subsequently heightened when the eight left, south-western bays were built. Plinth, first and second-floor sill bands, wooden gutter brackets. Windows are twelve-pane hung sashes with segmental brick lintels, those to the ground floor have individual stone sills. Between the first and second floors is a painted sign reading `BEEHIVE BRAND GREGORY FENTON LTD. KNIVES AND TOOLS'. This continues on the right return, reading `GREGORY FENTON LTD. BEEHIVE WORKS'. In bay seventeen is a cart entrance to the large courtyard, with ashlar jambs and imposts, depressed arch and oversized keystone, the arch painted with `BEEHIVE WORKS', and plain wooden double doors. To either side of bays eight and nine is a wide warehouse doorway, with stone sill set above ground-floor level, and segmental arched head. Bay nine doorway has a half-glazed double door with overlight, whilst that to the left has been altered to form a window. In bay one is a round-headed doorway with stone imposts and oversized keystone, and modern panelled door with fanlight. In bays two and sixteen are two doorways altered from windows. In bay two is a plain door with overlight, and in bay sixteen is a modern panelled door with overlight.

Central range: Three-storeyed L-shaped building, with deeper, shorter arm adjoining workshop range to rear of large courtyard. The range faces into the large courtyard. The ground floor of the longer arm has a blocked window, with shaped brick head in the first bay from the left, four segmental arched heads of individual hand forges, one now blocked and built over with external steps, two converted to windows, with modern small-paned window frames, and one now with plain timber double doors. In the second bay from the left is a covered cart entrance, with segmental arched head, through to the second courtyard. Upper floors of fourteen bays with casement windows with soldier lintels, and modern or altered frames. Round-headed doorway at first-floor level with external steps. Shorter arm has tall round-headed doorway in left corner. To right of doorway is door and casement window sharing same frame with shaped brick lintel, with similar casement window to right, with straight joint to indicate it too originally had an integrated door. Upper floors have five bays of casement windows similar to those of long arm of the range. Rear elevation (Egerton Lane) has a ground floor with blocked grille to the left, two metal ventilators and inserted window openings and doorway. Upper floors have nine window bays with casement windows with two-light multi-paned frames.

INTERIOR: Only part of the front range and part of the ground floor of the central workshop range were inspected internally. The front range has to the left a cantilever stone winder stair with cast-iron anthemion balusters and ramped handrail. The first floor is divided by transverse brick arches. The ground floor of the shorter arm of the central range contains a high-ceilinged room, which is fireproof, and has bearing boxes for line shafting.

HISTORY: Beehive Works was originally known as Milton Works. Its first known occupants were B Mathewman and Sons. By 1888 the primary occupants were the Atkinson Brothers, who remained at the works into C20.

SUMMARY OF IMPORTANCE
Beehive Works was identified as being of special architectural and historic interest by English Heritage during a thematic survey undertaken to assess the best surviving examples of buildings associated with Sheffield's metal manufacturing and metal working trades. It was identified as an extremely good and complete example of a large purpose-built integrated cutlery works dating initially from the late 1850s or early 1860s, with rapid expansion thereafter during the 1870s and 1880s. The complex was built as a mechanised works, with a larger steam power plant being built as more grinders' wheels and power forges were added. This type of complex is very distinctive to the industrial identity of Sheffield, which, in the later C19 was known throughout the world as a centre of excellence in the manufacturing and processing of steel. Against the loss of many such buildings in the late C20 due to the severe decline of the industry, Beehive Works is an important survivor. It demonstrates the layout and building types of such a complex, being particularly significant for the retention of grinding hulls, extremely rare survivals of buildings related to a specific process in contrast to the more generic cutlers' workshops, with probably only around eight sites in Sheffield retaining physical evidence of grinding. This survival make Beehive Works a complex of particular importance in the light of an enhanced appreciation and understanding of Sheffield's industrial metal-working buildings. Beehive Works also has a strong Group Value with Nos. 94, 96, and 100 Milton Street, and Taylor's Eye Witness Works, Milton Street.