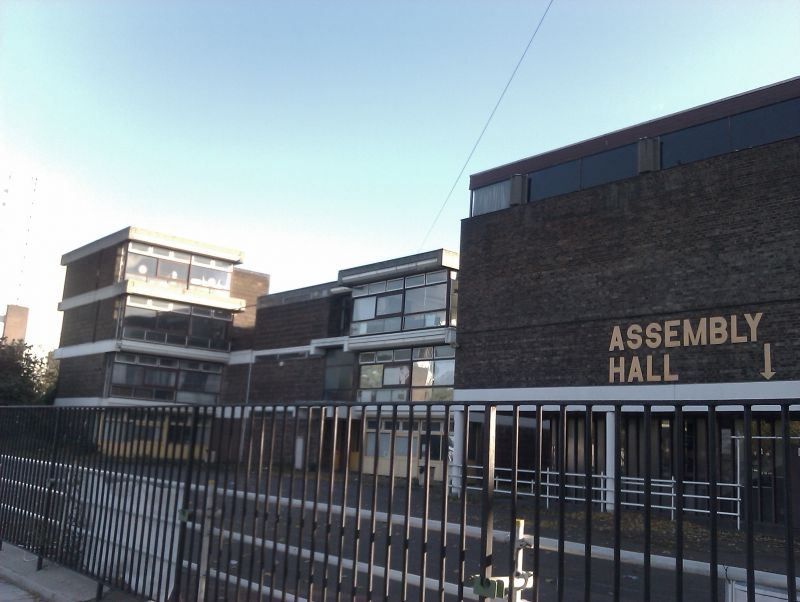 Comprehensive school. Designed 1960, built 1962-4 by the Architects' Co-Partnership for the London County Council. Dark brick, with exposed concrete floor plates and beam ends, flat roofs. Two and three storeys. Complex plan comprising a first-floor hall over music rooms, offices, classrooms (the three-storey range, to south), science and art blocks, with two former houseblocks, one now the canteen and kitchen, the other in mixed community use. All save the two last and the hall are linked at first-floor level by glazed corridors. The classroom blocks have glazed ends, the windows of contrasting brown timber opening lights and white-painted windows to top and bottom; distinctive narrow mullions to corridor glazing.

Interiors. Hall block has square first-floor hall made octagonal by means of gallery round all sides, extended on one side to form stage and with projecting box for theatre and film equipment. Diagrid roof. The hall is reached via timber open-well stair from spacious entrance hall beneath. The other rooms have not been inspected.

Lilian Baylis, originally known as Beaufoy School, was built to replace four older secondary schools in the area, among them the former Beaufoy School founded by Henry Hanbury Beaufoy in 1851 and rebuilt in 1909 as an early Junior Technical School. Although it was never published, Lilian Baylis compares well with other schools by ACP, and with the schools already listed. In date it falls just outside the years (1945-62) considered by our thematic survey in 1992, which was far from comprehensive and which looked only at schools which were published. In style it closely resembles the idiom of concrete and dark brick being used by 1960 by Lyons Israel Ellis for a series of well-known schools, among them the listed boys' and girls' schools at Oldbury Wells, Bridgnorth (1957-60) and Up Holland School (1958-60). What makes Lilian Baylis special, however, is its plan. Whereas the Lyons Israel Ellis schools, like earlier LCC schools, place all their accommodation in one main block, Lilian Baylis comprises a series of low, linked blocks to form a series of asymmetrical courtyards, with the principal circulation consisting of galleries at first-floor level. Unlike the earlier practice, established by the Ministry of Education's St Crispin's School, Wokingham (1951-3), each element is given equal weight, making for a consistent height of two or three storeys. This plan is more usually associated with the better-known Scott Lidgett School, Southwark, of 1968-71. Despite the addition of some plastic trunking, the whole composition is extremely refined and elegant. The school hall is a particularly handsome space, a square made octagonal by means of a gallery all the way round, well equipped with facilities for film and theatre, and reached via an open stairwell from the entrance hall below. The finishes are tough, yet there is a sense of drama that is rare in a school.