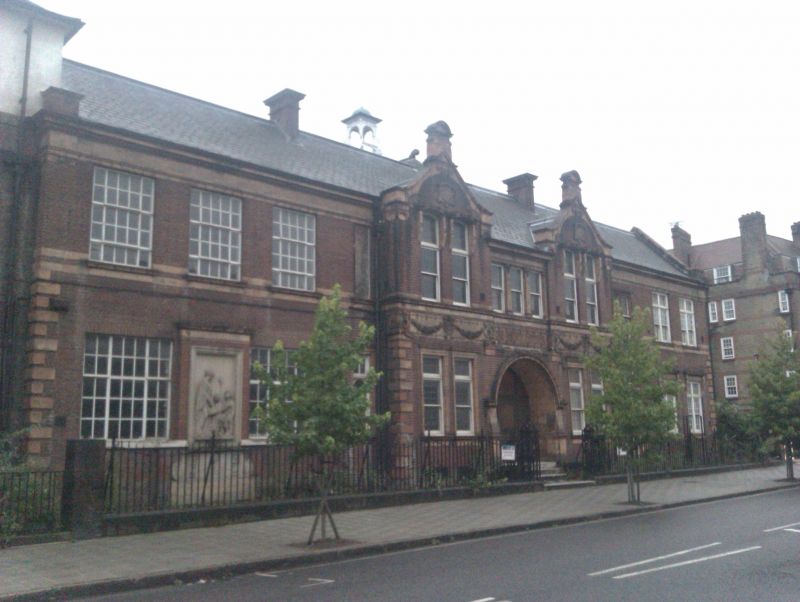 2.
Former boys technical college. 1907 by F. A. Powell. A two storey building of red brick with terracotta dressings which faces on to Black Prince Road. The most elaborate part of the main façade is the central projecting section. It has two side bays with quoins to the first floor, whose shaped gables break through the eaves. Beneath a floral swag frieze with the name of the school in Art Nouveau style lettering, is a wide round-arched entrance. Flanking the central section are two roughly three bay sections; that to the left has new windows, possibly contemporary with the 1920s/30s extension; that to the right has a nine light staircase window, with a lunette window beneath, with mullion and transom windows in the end two bays. The left section also has a relief panel moved from the original 1850s building with an image of a teacher and two pupils, beneath which is a plaque celebrating the laying of the foundation stone of the 1907 building, and the inscription for the panel. The inscription on the relief panel reads, 'Those that do teach our babes/Do it with gentle means and easy tasks'. To the left is a three storey 1920s/30s extension which is not listed. A first floor band and an entablature at eaves level, both in terracotta, run the length of the façade. The slate roof is fairly high pitched, with a bell cupola on the ridge of main hall.

INTERIOR: There is a large double-height central hall on the ground floor, with exposed arched brace trusses supported by scroll like corbels, with a decorative plaster ceiling. Floral swag designs adorn the friezes and pilasters surrounding the large arched three part end window, and the front five bay gallery, previously open but now glazed. There is a corridor on either side of the hall, with two large classrooms beyond. The south west classroom has exposed collar braces, with a wooden boarded ceiling.

At the front of the building, a small office is situated to either side of the entrance, with the staircase to the west. The entrance hall has a chequer board marble floor, green and brown glazed tiles to dado level, with pilasters and decorative frieze and dentil cornice above. The staircase is unusual in being constructed of brown glazed tiles with a moulded terracotta handrail. At the rear is the three storey caretaker's house.

There are two large classrooms on the first floor, with a smaller subdivided room at the front. The basement houses the girls and boys toilets, and two rooms which were previously used as the large and small workshops. The boys toilets are distinctive in retaining their brown glazed ceramic urinals. The most striking feature of the building's interior is the extensive brown glazed tiling which runs to dado level through the corridors and classrooms, with cream tiling above in the WCs. Research has suggested that these are 'Cockrill-Doulton Patent Tiles', invented by J. C. Cockrill, borough engineer for Great Yarmouth, and patented along with Doulton ceramics. The system involved 'laying a course of tiles on each face of the wall, and filling the intermediate space with soft concrete, the weight of which on the horizontal flange keeps the tile in a vertical position. This operation is repeated course by course'. The stated benefits of the new method were that it was cheaper and provided a smoother surface than that produced by glazed bricks. The Beaufoy Institute appears to be the only surviving example of this technology, although it seems to have had limited application, suggesting it was not successful or influential. It is thought that the terracotta dressings on the façade and the ceramic urinals and tiled stairs with moulded terracotta handrail are probably also Doulton.

HISTORY: In 1850-1, Henry Beaufoy (a member of the distiller family, which moved from gin to vinegar production at their factory in Lambeth), built the Lambeth Ragged School, Newport Road (off Black Prince Road), as a memorial to his wife Harriet. Amongst the board of trustees at the time was John Doulton, of Doulton Ceramics, Lambeth.

Around 1903 the site was sold to the London and Metropolitan Railway Company, and a new site was sought by the trustees, which included two members of the Beaufoy and Doulton families. It is thought that there were two temporary sites before the Institute relocated to Black Prince Road in 1907. The new school was designed as a technical institute for boys by the architect F.A. Powell. The foundation stone was laid on 21st February by Mildred Beaufoy wife of Mark Beaufoy chairman of the governors. A plaque with motto was moved from the original building and incorporated in to the new building. Additional land was acquired in the 1920s/30s by London County Council, and an extension to the main building was added.

SUMMARY OF IMPORTANCE: The Beaufoy Institute, Lambeth, is an interesting example of an early C20 boys technical school (1907, by F. A. Powell), which has its roots in the Ragged School movement of the early C19, and is connected to the family firms of Beaufoy and Doulton also based in Lambeth. It has an attractive architectural front of the period and several interior features of note. Research has suggested that it was a test site for 'Cockrill-Doulton Patent Tiles', an invention of J. C. Cockrill, borough engineer for Great Yarmouth. It seems likely that the extensive glazed tiling in the building was constructed using this method, but the technology seems to have had limited application; this appearing to be one of possibly only a few experimental examples.