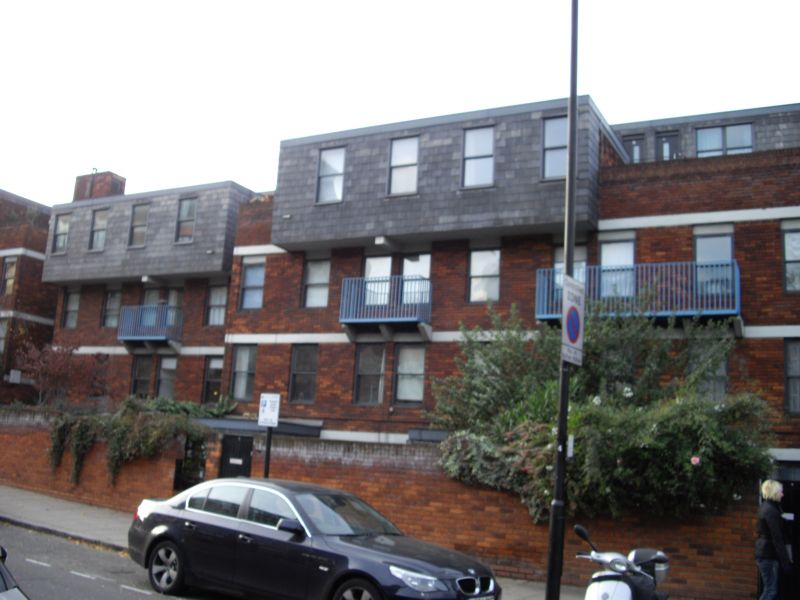 Block of thirty flats and maisonettes. 1969-72 by Darbourne and Darke for the City of Westminster. Red brick walls with concrete slab floors, exposed as painted bands, and roof. Roof clad in felt, with distinctive mansards of artificial slate and metal edges. Slabbed walkways and concrete and brick steps. Complex scissor plan blocks, with maisonettes to front and back behind walled gardens, those to the rear (nos. 8-14) set lower with extra kitchen and dining room; living rooms to all units face the street, and all have bedrooms on the garden elevations. Above them one bedroom and studio flats are set off the roof-top street in the sky' (nos. 15-30), some reached via external stairs, the larger units on two levels to garden front and with internal stairs under separate sloping felt roofs. Five and six storeys high. Living rooms on upper storeys have blue balconies. All windows of grey metal. Black timber doors, some with glazed panels. Stairs to upper street have timber balustrades and handrails, and linked by ramp to Priory House. Interiors not inspected.

For the third phase, Lillington 3, however, the architects revised their original designs to introduce more maisonettes for families with their own front door. In the revised scheme nearly half the units have a front door and small garden at ground level, and there is more private than public open space. Stylistically, too, there is a difference, as here was first introduced the slate mansards that were such a feature of their later Marquess Estate at Islington. As the Architects' Journal for 1 October 1969 recognised, the revised plans allowed for this considerable family accommodation at densities of 255 persons per acre. The Times for 13 September 1972 considered it `an elegant and exciting environment for young and old.' Lillington 3 perhaps spawned even more imitations than the original scheme, not least by Darbourne and Darke themselves. `Darbourne and Darke have pioneered a new view of living in the public housing sector. It could be argued that what they have done is to middle-classify the council house, but there is more to their achievement than that. Their approach should be seen as an expression of the idea that the egalitarian society is more easily realised by building on the "middle class" than it is by building on the old notion of the "working class"', wrote Colin Amery and Lance Wright in 1978. Lillington 3 won an RIBA Commendation in 1973.
Sources:
Architects' Journal, 1 October 1969, pp.806-9
The Times, 13 September 1972
Amery and Wright, The Architecture of Darbourne and Darke, 1978