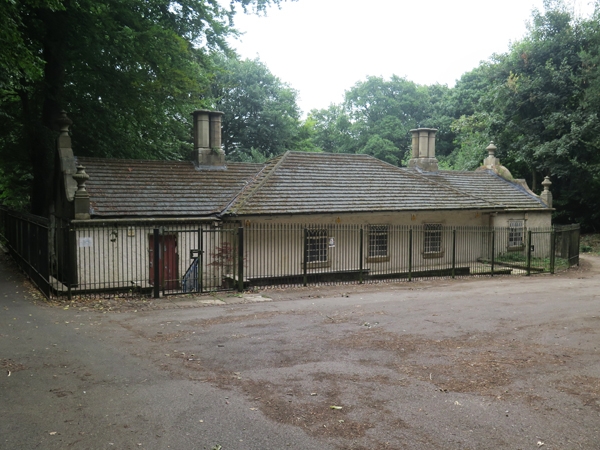 PLAN: the building is built into the hillside, which falls to the north, with two storeys (ground floor and lower ground floor) on the north side and one storey (ground floor) on the south side. The lower ground floor has a central room containing a large, oval plunge bath. At the west end are two stores and at the east end is a loggia, and an exhibition/store room with a smaller cellar off containing the site of a spring. The main entrance is at the west end of the ground floor, opening into a lobby with WCs off, with a large central room and a kitchen and store at the east end.

The two floors do not now interconnect internally; there are external steps and a narrow path alongside the west end of the building leading to steps down to the lower ground floor constructed against the north elevation.
EXTERIOR: the walls are rendered and painted with a rendered plinth, ashlar dressings and hipped and gabled roofs, now covered in Decra metal sheet roof covering, with two coped stone ridge stacks with quadruple octagonal flues. The single-storey, south elevation is of five bays. The central three bays step slightly forward and have a hipped roof with deep eaves with timber soffits. The outer bays have moulded stone gutters. The first bay has a square-headed timber door with Gothick tracery. The remaining four bays have square-headed windows with stone sills and modern, metal shutters replicating the timber, Gothick tracery window frames behind. The timber window frames replace the cast-iron frames mentioned in the 1973 List entry.

The moulded stone gutters continue straight across the single-storey, east and west end bays. Above are shouldered, shaped gables with central, stone quatrefoil windows, moulded stone coping stones, and gadrooned urns on square bases to the outer corners with a similar gadrooned urn to the gable apexes. The east elevation has a square-headed doorway close to the left-hand corner with a timber door with Gothick tracery. Both elevations have a central, square-headed window with similar stone sills and modern, metal shutters with timber, Gothick tracery frames behind.

The north elevation is of five bays and two storeys with a moulded stone string course between the two floors. It is similar to the south elevation in having three central bays which step slightly forward and has a hipped roof with deep eaves with timber soffits. The outer bays also have moulded stone gutters. On the lower ground floor the first bay has a wide, square-headed opening to the loggia, with a modern, Gothick tracery metal screen and gate. The fifth bay is partially obscured by a flight of external steps. At the foot of these steps, on the left-hand side of the bay, is a square-headed doorway with a timber door with Gothick tracery and in the centre of the bay is a square-headed window. The second, third and fourth bays on the lower ground floor and all the bays on the ground floor have similar windows with stone sills and modern, metal shutters with timber, Gothick tracery frames behind.
INTERIOR: the lower ground floor has a large central room containing a large oval plunge bath lined in stone with double stone steps down at each end incorporating the spring inlet at the east end and the outlet at the west end. The floor is stone flagged and there is a modern, deep stone skirting and stone-faced dado with moulded timber dado rail. The ceiling is coffered. The doorway in the centre of the west wall has a two-panelled door. The loggia at the east end is stone-flagged and has a doorway opening into the plunge bath room and a doorway opening into a smaller room in the south-east corner. Both doorways have moulded timber architraves and timber doors with Gothick tracery. The room in the south-east corner has a stone-flagged floor with a window with a timber, Gothick tracery frame in the north wall looking into the loggia. Adjacent, in the west wall is a chimney breast and square fireplace with a stone surround. In the south-east corner there is an opening into a small cellar with a brick barrel-vault. It has a stone table on its north side and a doorway with an iron rolled steel joist lintel in the east wall, opening into a second small cellar with a brick barrel-vault; the damp south-east corner of this cellar is said to be where the spring enters the building.

The ground floor layout, fixtures and fittings date from the 2001 to 2002 restoration.

It is traditionally believed that Birley Spa was the site of a Roman bath, although there is no physical evidence to support this presumption. The first known documentary evidence is from the C18. In 1734 Dr Thomas Short’s book ‘Mineral Waters of England’ mentioned a spa here and in 1788 the agent to the Duke of Kingston, Lord of the Manor of Beighton, undertook a survey of the Manor, describing how ‘The estates abound with wells and also springs of different mineral qualities where people from Sheffield etcetera come, both for bathing and drinking the waters’.

In 1842 to 1843 the second Earl Manvers, and Lord of the Manor of Beighton, developed a new spa combining a small bath house and a hotel as a speculative venture, which opened to the public on 1 May 1843. A contemporary newspaper account described a commodious large bath, ‘with water as pure as chrystal’, a chalybeate spring (mineral spring water containing salts of iron) and another spring with saline ingredients. The building was built into the hillside with the hotel at ground-floor level and the bath house at the lower ground-floor level. The baths had convenient dressing rooms, a hot slipper bath, and two basins to contain the spring water. The bath house setting was also described, stating that ‘from whatever side it is approached the scenery is of the most beautiful character, and will repay the rambler and admirer of nature for his walk’. The water was also analysed by Mr West, a chemist from Leeds, to confirm its beneficial and tonic properties, and the results were published as proof of its therapeutic qualities. An administrative committee was appointed to run the establishment consisting of Thomas Staniforth Esq of Hackenthorpe, Edward Hobson of Birley Spa, George Cox of Beighton and John Tillotson, school-master of Beighton. Eleven candidates applied to manage the place, named the Bath Hotel. George Eadon and his wife were appointed resident managers at a salary of twenty pounds a year with free rent and coal.

The spa was aimed at a broad selection of the population. When it opened in May 1843 the committee member Edward Hobson recorded in his diary that the Duke of Portland from Welbeck had arrived in his carriage and three horses and stayed for over a week, taking hot baths. A Bath Charity was also started to enable poor people to take the waters. An omnibus ran to and from the Commercial Inn in Sheffield twice a day, except Sundays, and private apartments could be rented. A newspaper advertisement in 1845 listed the price of a variety of baths, including a marble bath, a shower bath, a tepid bath, large cold plunge bath and a ladies’ cold plunge bath. It may also indicate that the spa was failing to reach its full potential, advertising a reduction in the charges for bathing particularly for annual ticket subscribers.

The 1:2,500 Ordnance Survey map surveyed in 1875, published in 1877, labelled the building Birley Spa (P.H.) but by 1878 there was a marked decline in usage of the spa and the hotel part was shut down. It is believed that Earl Manvers removed the marble from the baths for his own use. By 1895, when John Platts, a farmer and gardener, became proprietor of Birley Spa only the large plunge bath remained in use.

In the 1920s and 1930s Birley Spa was developed as a children’s pleasure grounds by George Moulson and his partner, William Smith. The grounds in which the spa building stood contained a wishing well, swing boats, sand pit and paddling pool, with walks and bench seats. A large pond was also constructed as a boating lake, fed by the spring water. Historic photographs from this period show a deep balcony on the two-storey, north side of the building reached by a doorway in the central bay, where the Woodhouse Silver Prize Band and the Woodhouse Cinema Orchestra played. The single-storey south side also had a central doorway. The spa became a very popular venue, especially for families and groups, seen as a Bank Holiday or Sunday School treat. The grounds were compelled to close down at the outbreak of the Second World War in 1939, due to the prohibition of assemblies of crowds of people which was introduced as a safety factor in case of air raids. The building and grounds were allowed to decay and become dilapidated.

In the 1950s Sheffield Corporation compulsorily purchased Birley Spa when it was building the post-war Hackenthorpe housing estate. Plans drawn up in 1961 by J L Womersley, Sheffield City Architect, show the large, oval plunge bath flanked by cellars and a loggia at lower ground-floor level, with two flats at ground-floor level, one with two bedrooms and one with a single bedroom. In 1997 the architect Peter Pace drew up plans to restore the plunge bath and to turn the ground floor into a community space with a large room for meetings, teaching and events, a kitchen, a store and WCs. This involved the removal of many of the non-structural walls related to its previous domestic use, the removal of a staircase between the floors in the south-east room, the replacement of the central, south doorway with a window, and the insertion of a fireplace at the west end of the large room. He then undertook the restoration between 2001 and 2002. The building is presently (2019) disused and its future ownership and management is being considered.

Birley Spa, a spa and hotel, latterly a community centre, of 1842 to 1843 for the second Earl Manvers, with later-C19 alterations and a 2001 to 2002 conversion to a community centre by Peter Pace, is listed at Grade II for the following principal reasons:

Architectural interest:
* as a purpose-built spa building containing a large, oval plunge bath lined in stone with double steps down at each end;

* an attractive, symmetrical design with good-quality detailing such as quadruple octagonal stone stacks and stone gadrooned urns to the shaped gables.

Historic interest:
* built for the second Earl Manvers as a speculative spa venture marketed for its therapeutic qualities and illustrating a long and widely-held belief in the medicinal curative qualities of particular water sources.