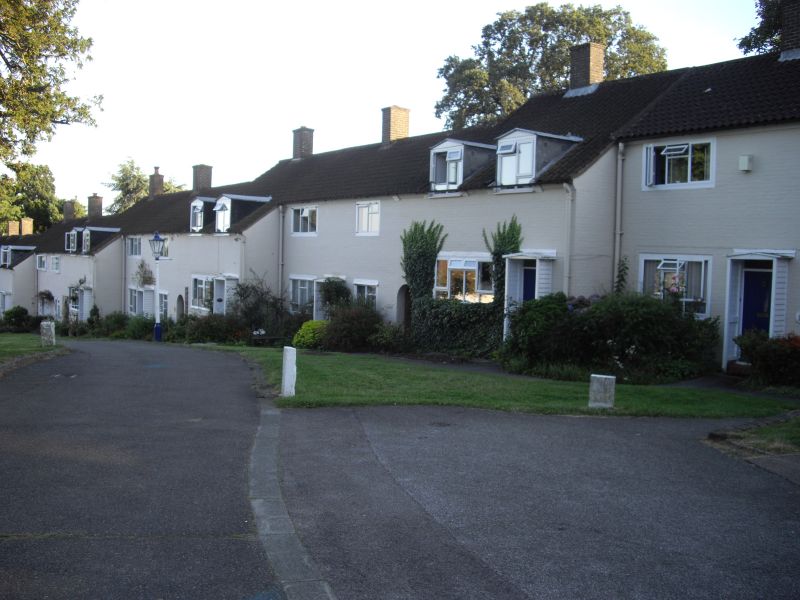 Terrace of ten houses. 1955-7 by Donald McMorran of Farquharson and McMorran, with Peter Nuttall as assistant, for the Corporation of the City of London. Brick construction, colourwashed, with pantiled roofs and brick stacks. The houses set in pairs, breaking forward down the slope, with a group of three at the bottom of the slope. The houses each of two storeys and each have three bedrooms. The pairs consist of one more compact plan-type, with dining-kitchen and dormer windows, separated from a wider house by a round-arched entry. Metal windows with side-opening casements and toplights, those to Nos. 34 and 38 renewed but respecting the pattern of the originals. Timber doors set within timber porches with pointed hoods reflecting the style of the dormers.
INTERIORS: Living rooms with picture rails. Staircases with timber balastrades. A wide selection of fitted cupboards in the principal rooms. Kitchen and bathroom fitings not of special interest. Donald McMorran is slowly becoming recognised as one of the most significant architects to work in a traditional style in the 1950s. What makes him stand out from other traditionalists was his willingness to tackle progressive building types like public housing and schools while sticking to the old values of composition, proportion and texture. This puts him closer to Giles Scott than to architects like Raymond Erith who made their names with private houses. He also owed much to Vincent Harris, for whom he worked between 1927 and 1935. This is the smallest but finest of four housing schemes by McMorran, two of them for the City Corporation. The composition of three terraces set round a village green, with views of the North Downs, is made the more idyllic by the position of the two blocks of flats as a buffer to the road behind. The density is 57 dwellings per acre, less than the permissible seventy 'so as to establish conditions under which a community with its own continuity and life might be able to flourish'. To judge from the estate's condition, it seems to have done so. The contrast of the flats with the colourwashed cottages is particularly distinguished. The form of the colourwashed terraces set in pairs owes something to the work of Tayler and Green, translated to an urban setting.