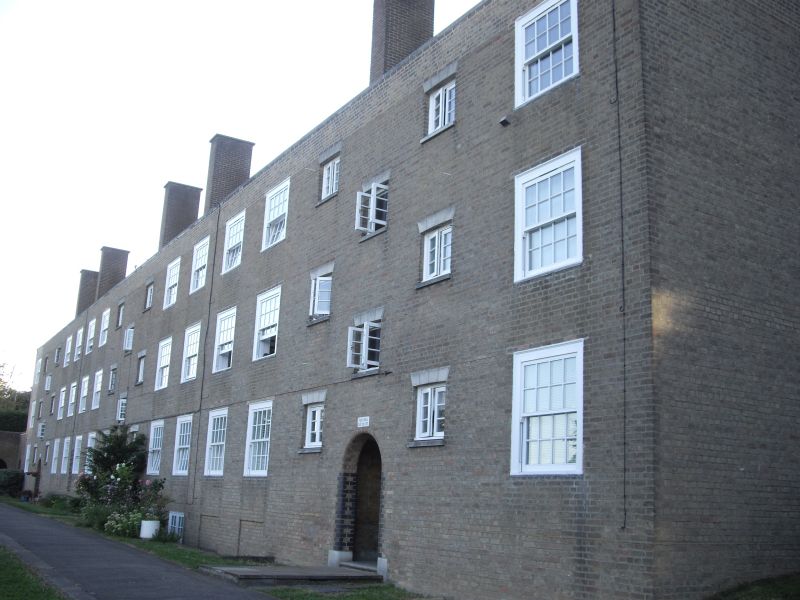 Block of eighteen flats. 1955-7 by Donald McMorran of Farquharson and McMorran, with Peter Nuttall as assistant, for the Corporation of the City of London. Brick construction, faced in hand-made Essex bricks, with weatherboarded gables and pantiled roofs. Three storeys, with one- and two-bedroom flats arranged in pairs either side of staircases; the outermost forming a mirrored pair, the central staircase serving entirely two-bedroom flats.
Symmetrical composition, the living rooms at the front with square sash windows having small panes; smaller windows to the staircases and bathrooms under moulded heads with incised voussoirs. The large windows repeated on the sides and the rear elevation (facing Sydenham Hill). Staircase halls entered via arched openings. Six very tall stacks in a roof that is well set back behind high parapets. The interiors not of special interest.
Donald McMorran is slowly becoming recognised as one of the most significant architects to work in a traditional style in the 1950s. What makes him stand out from other traditionalists was his willingness to tackle progressive building types like public housing and schools while sticking to the old values of composition, proportion and texture. This puts him closer to Giles Scott than to, for example, Raymond Erith. He also owed much to Vincent Harris, for whom he worked between 1927 and 1935. This is the smallest but finest of four housing schemes by McMorran, two of them for the City Corporation. The composition of three terraces set round a village green, with views of the North Downs is made the more idyllic by the position of the two blocks of flats as a buffer to the road behind. The density is 57 dwellings per acre, less than the permissible seventy 'so as to establish conditions under which a community with its own continuity and life might be able to flourish.' To judge from the estate's condition, it seems to have done so. The contrast of the flats, notable for their fine brickwork and traditional proportions, with the colourwashed cottages is particularly distinguished.