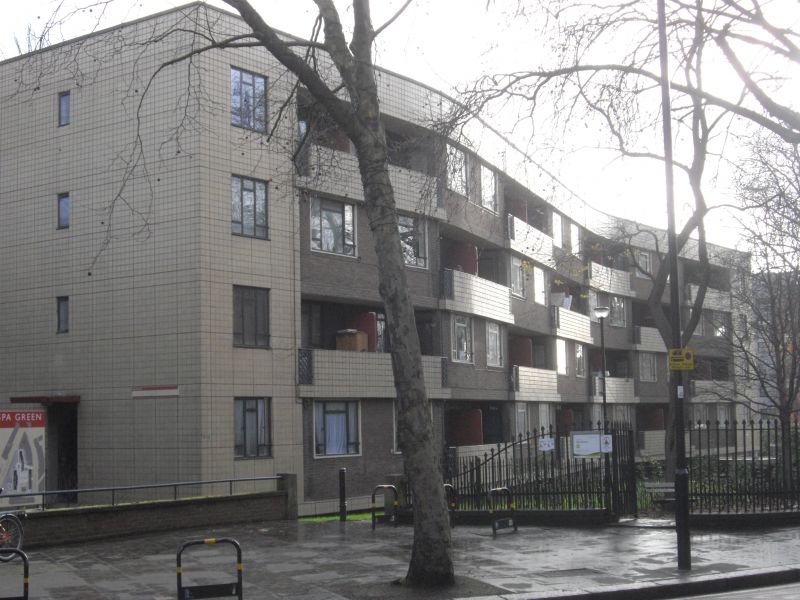 Interiors carefully designed and finished to a high standard. The fitted kitchens were 'a revelation for working class housing' (Coe and Reading) and are noted for their Garchey system of refuse disposal (the first in London and the only one anywhere still known to be in operation). The last served by a district heating set under Tunbridge House. The Spa Green Estate is the first and finest scheme of public housing by this celebrated firm, working for Finsbury M13 for whom they completed a pioneering health centre (q v Pine Street) in 1938. Lubetkin and Tecton were noted for their commitment to public building and had won a much publicised ideas competition for 'working class' flats in 1935 - yet had been frustrated in their ideas in the 1930s as their private Highpoint (q v Haringey) was so successful it went rapidly upmarket. Spa Green was designed before the war for a smaller site, but wartime bombing enabled the blocks to be better placed. The war also enabled Tecton to continue their investigative approach to architectural design and rational planning and it saw the development of Ove Arup's box frame or egg crate system which was to transform post-war building. By placing the structure in the side walls and doors the elevations were freed up for the patterning and texture that made Lubetkin's post-war work so distinctive. This frame structure also enabled Lubetkin here to explore his love of curves - the only block in which he adapted the frame to this effect. It forms a counterpoise at right angles to the larger, square blocks.

Spa Green is included at a high grade because the box frame was devised by Ove Arup especially for the development, though one small block was used earlier (q v Brett Manor, Hackney). It is the work in which Lubetkin at last expressed his ideas on low-cost public housing, simply but without the cost limits that constrained his later work. Every detail of the exterior and interior is carefully thought out and finely finished. It is the most important post-war development by the thoughtful and inventive pioneer of the modern movement in Britain. 'In this scheme the town planning, interest, the structural interest and the manipulation of structure and planning to arrive at an architectural totality of high quality epitomises the problem of high density housing as the architect sees it and offers one of the most interesting results yet obtained' (Sir John Summerson, 1959.