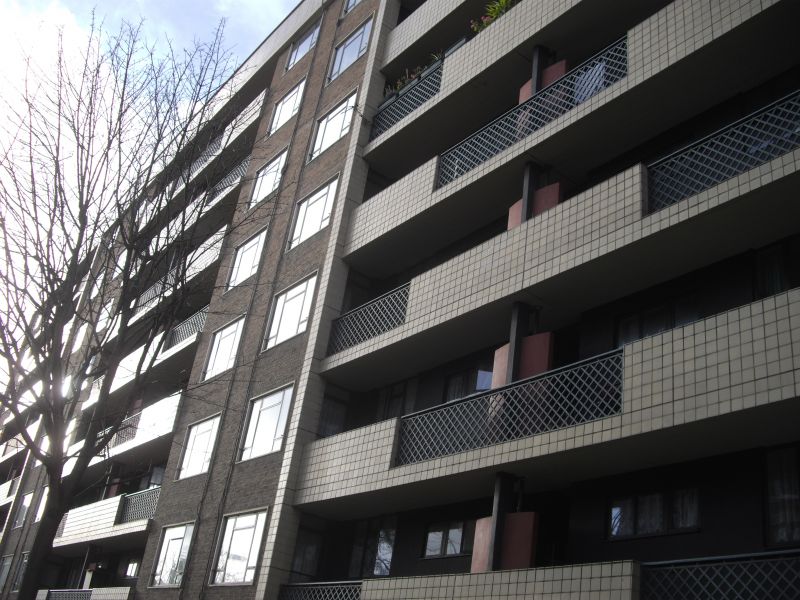 Block of 48 flats with attached boiler house and chimney. Designed in 1938 for Finsbury MB by Lubetkin and Tecton, revised design built 1946-9; completed work published ill the name of Skinner and Lubetkin. Ove Arup and Partners engineers. Innovative reinforced concrete box frame, with expansion joints and staircases carried as balanced cantilevers off a central spine stabilised by the twin columns of the lift shaft. The open egg crate structure enabled Lubetkin, assisted by (C L P Franck, to devise an elaborately patterned exterior of brown brick with tiled ends airs balconies and dark red cast-iron railings and grilles. Red pointing and grouting is a distinctive feature. Six flats per floor, those to upper floors served by three lift towers, with living rooms to the street and two or three bedrooms facing quiet internal courtyard. One-bed and bedsitter flats on ,,round floor reached by access deck. Eight storeys, with parabolic roof designed aerodynamically to provide drying facilities and encompassing lift tops. Boiler house in part surged single storied angled block, the 8Oft chimney incorporated into the side of the block. Principal elevation overlooking park devised by Tecton on Rosebery Avenue with balconies set within line of block in front of kitchens. The whole elevation expressed as a grid, set in frame provided by high parapet and tiled ends, a separate framing giving emphasis to centrepiece - which does not reflect the internal partitions of the flats. The ground floor set back, the upper floors set on pilotis. The concrete balconies tile-clad, with sections of decorative ironwork chequerboard texture to the block, based, said Lubetkin, on Caucusain carpet patterns on his native Georgia. Metal windows with opening casements. Porch with shell hood. Rear elevation simpler, with windows in concrete surrounds and chequered open ventilation grilles to stairs. Ramped entrance Lives on to deck access to small flats on ground floor. Interiors carefully designed and finished to a high standard, with timber floors, the fitted kitchens linked by hatch to living room, were a
'revelation for working class housing' (Coe and Reading) and are noted for its Garchey system of refuse disposal (the first in London and the only one anywhere still known to be in operation). The flats are served by a district heating system set under Tunbridge House.

Tunbridge House and Wells House form a mirrored near-pair set back to back. The shape of the aerofoil-shaped drying areas resulted from a series of experiments with the scientist Hyman Levy. Tunbridge House gains its name from New Tunbridge Wells, the chalybeate spa developed on the site in C17. The Spa Green Estate is the first and finest scheme of public housing by this celebrated firm working for Finsbury MB for whom they had completed a pioneering health centre (q v Pine Street) in 1938. Lubetkin and Tecton were noted for their commitment to public building and had won a much publicised ideas competition for 'working class' flats in l935 - yet had been frustrated in their ideals in the 1930's as their private Highpoint (Haringey,) already listed, was so successful it went rapidly upmarket. Spa Green was designed before the war for a smaller site, but wartime bombing enabled the blocks to be better placed. The war also enabled Tecton to continue their investigative approach to architectural design and rational planning and it saw the development of Ove Arup's box frame or egg crate system which was to transform post-war building. By placing the structure in the side walls and floors the elevations were freed up for the patterning and texture that made Lubetkin's post-war work so distinctive. 'Too often in contemporary buildings of this kind the elevational proportions, with their repetitive rhythm of openings, seem to form a part of a continuous band of indeterminate limits, which could be snipped off bv the yard at any point' Lubetkin told the Architectural Review (1951). This is not the case here. Spa Green is included at a high grade because the box frame was devised by Ove Arup especially for the development, though one small block was used earlier (Brett Manor, Hackney). It is the work in which Lubetkin at last expressed his ideas on low-cost public housing, simply but without the cost limits that constrained his later work. Even, detail of exterior and interior is carefully thought out and finely finished. It is the most important post-war development by the most thoughtful and inventive pioneer of the modem movement in Britain. 'In this scheme the town planning interest, the structural interest, and the manipulation of structure and planning to arrive at an architectural totality of high quality epitomises the problem of high density housing as the architect sees it, and offers one of the most interesting results yet obtained'
(Sir John Summerson, 1959. (Architectural Review: Volume 109: 1951- : 138 - 140; Peter Coe Social Commitment: Bristol: 1981 - : 173 - 6; John Allan: Berthold Lubetkin, Architecture and the Tradition of Progress: London: 1992 - : 377 ~ 405; Trevor Dannat (introduction by Sir John Summerson): Modern Architecture in Britain: London: 1959 -: 24, 151 - 53).