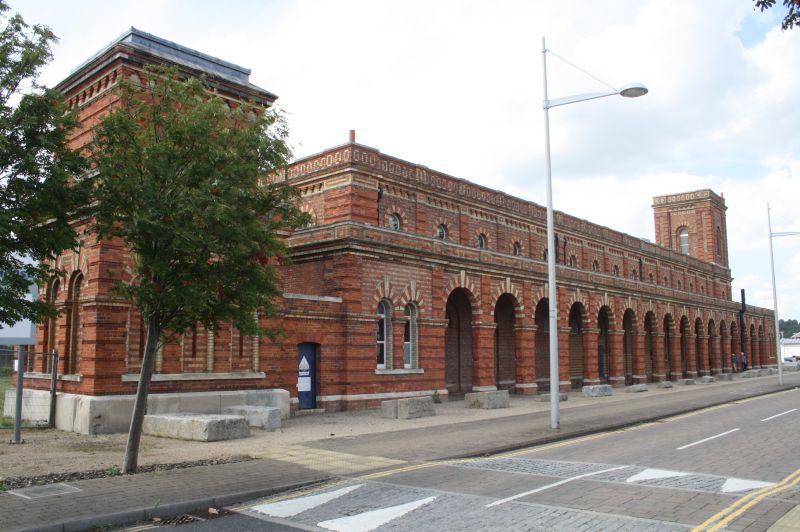 II
Dock pumping station, now disused, undergoing repair and plans for residential conversion in 2004. Dated 1873, with later-C19 and C20 alterations. Superintendent Civil Engineer for H.M. Dockyard Chatham, with plant designed by George B. Rennie. Polychromatic yellow and red stock brick with slate roof.
PLAN: Rectangular plan with engine house to north, boiler house to south, and chimney to south-east.
EXTERIOR: Comprises a single-storey range of 18 bays, with plinth and banded rustication below a moulded impost band; inner 2-storey range of 16 bays and narrower, each bay separated by shallow pilasters to a ground-floor cornice and parapet. Upper floor has triangular brick corbel frieze, cornice and parapet set forward to the pilasters. North end of 5 bays, that to centre with pedimented cornice over round-arched entrance with rusticated voussoirs, and open lobby with double doors, flanked by round-arched ground-floor 2-light windows with round-arched glazing bars set in matching recesses with rusticated voussoirs and keystones; corner bays have a pair of smaller windows. Ground floor has open arcade, some of which has been blocked, and with rusticated piers to inner arched windows. Upper floor has rusticated oculi to each bay; 3-bay north end has square accumulator tower to north-east, with paired rusticated pilasters, cornice and parapet, and round-arched window to each side. To South-east end, a square chimney truncated at the plinth and connected to the boiler house by a 1-bay linking flue; each side has a plinth, blind arcade of 3 arches, cornice and pedimented coping to a banded upper section with corbelled frieze and weathered coping.
INTERIOR: Divided into 2 sections: to north, the former engine pumping room with gantry crane and metal trussed roofs; to south, the former boiler room. Some smaller rooms to corners with small amount of later panelling. Accumulator tower to north-east of former engine room retains its central shaft. To south-east, a brick flue leading to the truncated remains of the brick chimney base. All other above ground plant has been removed. Some sub-surface remains such as culverts and shafts survive below the footprint of the building, with some recent preservative in-filling with foamed concrete.
HISTORY: This pump house was built as part of the late-C19 expansion of Chatham Dockyard, which involved the construction of three great basins for the repair of war damage to ironclad warships. This pump house serviced Basin No. 1, a repairing basin of four docks on the east bank River Medway. It powered the hydraulic system for the dock cranes and lock gates, probably with horizontal or vertical triple expansion steam engines.

Listed as an architecturally impressive Victorian pumping station that, beyond the exuberant polychromatic and arcaded elevations, has historic interest as part of George B. Rennie's late-C19 campaign to expand H.M. Dockyard Chatham.