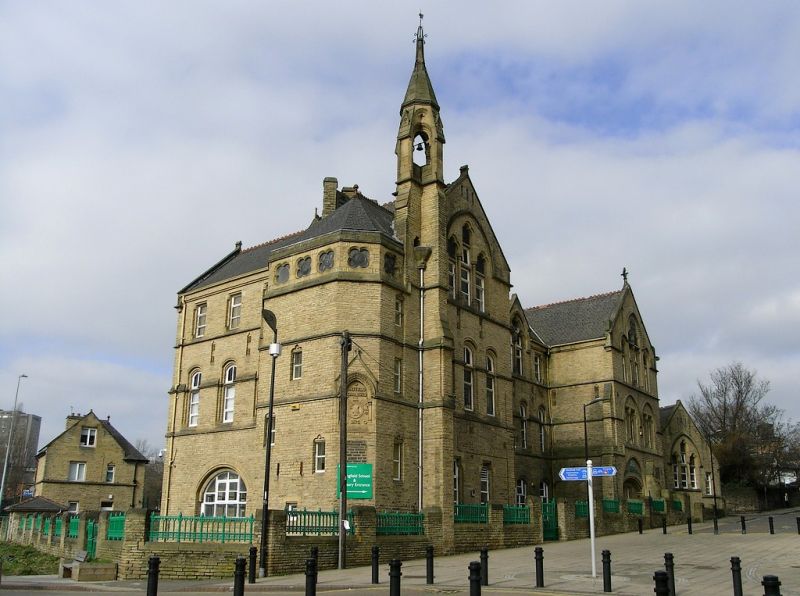 Board school, now junior and infant schools. 1875, with
additions 1892 and 1897. By Innocent & Brown. For the
Sheffield School Board. Coursed squared stone with ashlar
dressings and gabled and hipped slate roofs with single side
wall and single gable stacks. Gothic Revival style.
EXTERIOR: plinth, sill and lintel bands, coped gables. 3
storeys; 9 window range. Main block has a recessed centre
flanked by single gabled wings. First floor has 6 round-arched
single light windows and above, 2 small single light windows
flanked by large through eaves dormers with transomed double
lancets with quatrefoil lights above. Ground floor has 5
round-arched single light windows.
Left wing has 3 round-arched single light windows and above, a
stepped triple lancet with transoms and hoodmould. Below, 2
shouldered single light windows. Right return has a single
window on each floor, the second floor one flat-headed. To the
left of the gable, an angle buttress topped with an arched
bell turret with 4 arched openings and a spire with weather
vane. To left, a canted stair tower, 3 storeys plus attic,
with hipped roof. Single small window on each floor and 7
quatrefoil lights to the attic. Left return has staggered
windows on the lower floors. The canted corner has a blocked
window and above it, a gabled niche containing an inscribed
datestone.
Right wing has on the first floor, 2 paired shouldered windows
with linked hoodmoulds and above, a central transomed double
lancet with wheel window above, flanked by single transomed
lancets, all with linked hoodmoulds. Ground floor has a
central gabled buttress and to left, a pointed relieving arch
with inner moulded segmental arch containing a small window.
To left, an angle buttress. To right, a small paired window.
Right return has a shouldered window on the upper floors and
below, a flat-headed door with cusped headed surround under a
segmental relieving arch. To right, a 2 storey linking wing
with 3 windows on each floor, the upper ones larger and with
cusped lintels.
Rear elevation has a central projecting double gable with
short central buttress. Ground and first floors have 2 large
round-headed glazing bar windows flanked by smaller transomed
round-arched windows. Above, each gable has a 4-light
shouldered transomed window. Set back gable, to right, has 3
round-arched windows and above, a stepped triple lancet.
Below, a single large round-arched window. Right return has 3
windows on the upper floors, the second floor ones
round-headed, and on the ground floor a large round-arched
window.
Single storey addition, to Bolton Street, has single gable and
single ridge stacks with lozenge-shaped flues. 2 large gabled
through-eaves dormers, each with a transomed double lancet
with quatrefoil above, alternating with 6 shouldered single
light windows. Above, 3 gabled ventilators. Left gable has a
stepped triple lancet with hoodmould, flanked by single
shouldered windows. At the rear, adjoining 2 storey play deck,
L-plan. Railed deck carried on cast-iron columns, with coped
stone end wall. On the deck, a single storey square building
with pyramidal roof and single window.
To right, 1897 addition, with single storey block to left with
stepped coped parapet. To left, round-arched doorway with
cusped head flanked by 2 small single lancets, and above them,
single shouldered windows. To right, 3 tall segment-headed
transomed windows. To right again, a coped gable with square
chimney stacks forming angle pilasters, with square caps with
side openings. Low unglazed stepped triple lancet in moulded
pointed recess, and below, a transomed shouldered triple
window with shafts. Right return rendered.
INTERIOR not inspected.
HISTORICAL NOTE: this school is one of a number designed by
Innocent & Brown for the Sheffield School Board, and is
amongst the earliest in England to be built after the 1870
Education Act.
(Innocent & Brown: Illustrations of Public Elementary Schools
(etc): Sheffield: 1873-; Researches by G Hague, Sheffield City
Council).