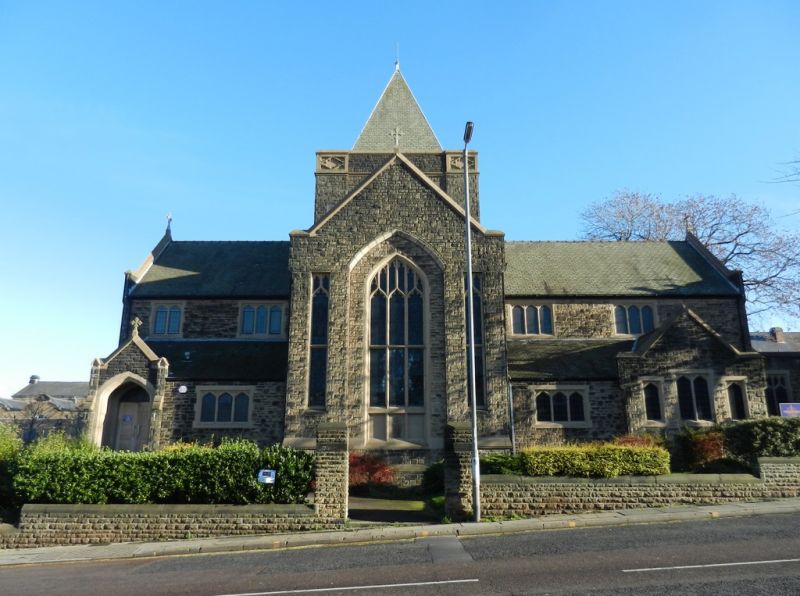 Parish church. Dated 1933. By Flockton & Son. Internal
alterations 1975 by Prof. Murta. Uncoursed squared stone with
ashlar and concrete dressings and Westmorland slate roofs.
Gothic Revival style.
PLAN: sanctuary, chancel with clerestory, side chapel, organ
chamber and vestries, transepts, crossing tower, nave with
clerestory and aisles, west porches.
EXTERIOR: plinth, moulded coped gables. Windows are mainly
flat-headed untraceried lancets.
Single bay sanctuary has a traceried 2-light window to south.
2 bay chancel has to east a traceried 3-light pointed arch
window flanked by tall single lancets with transoms. South
side has two 3-light windows, and north side a similar window.
South side chapel has to east a projecting shouldered gable
with a 2-light window flanked by single light windows, and to
west, a 3-light window.
2 storey organ chamber has to north a 2-light window.
Adjoining vestry has flat-roofed porch with moulded coping and
to west, segmental pointed door and single light window.
Transepts have a tall segmental pointed recess containing a
traceried 3-light pointed arch window, flanked by tall
flat-headed single lancets, all with transoms.
Square crossing tower, single stage, has clasping buttresses
with traceried panels at their heads and small louvred
openings in the buttresses on each side. Pyramidal roof with
weathercock.
2 bay chancel has on each side a 3-light window to east and a
2-light window to west. West end has a tall segmental pointed
arched recess containing a tall traceried 3-light pointed arch
window flanked by tall flat-headed single lancets, all with
transoms. Aisles have a 3-light window to east. To west, a
coped gable flanked by buttresses and containing a pointed
arched double door with fanlight. At the west end, a 2-light
window.
INTERIOR: ashlar faced interior has 4-centred arches
throughout. Sanctuary has moulded arch with full width blind
arcade above. Chancel has an arch on either side, the taller
northern arch containing the organ. To west again, larger
arches to the side chapel and vestry. Low pitched late C20
ceiling with moulded beams.
South side chapel has lean-to roof and transverse arch. East
end has marble and slate reredos. South-east window has
stained glass, 1958. Crossing has moulded arches on each side,
and panelled ceiling. Transepts have smaller chamfered arches
to east and west, those to west with glazed wooden screens.
South transept has stained glass south windows, 1945.
Nave has flat ceiling with moulded beams, and west end
separated by late C20 concrete and wood glazed screen carrying
a mezzanine floor. Below this, entrance lobby with late C20
door to north. Aisles have lean-to roofs. North aisle has
glazed door with overlight to east.
Fittings include C19 desk and chair, and late C20 wooden
pulpit, altar rail and lectern.
(Architecture of the 1930s in Sheffield: Fawcett AP:
Sheffield: 1989-).