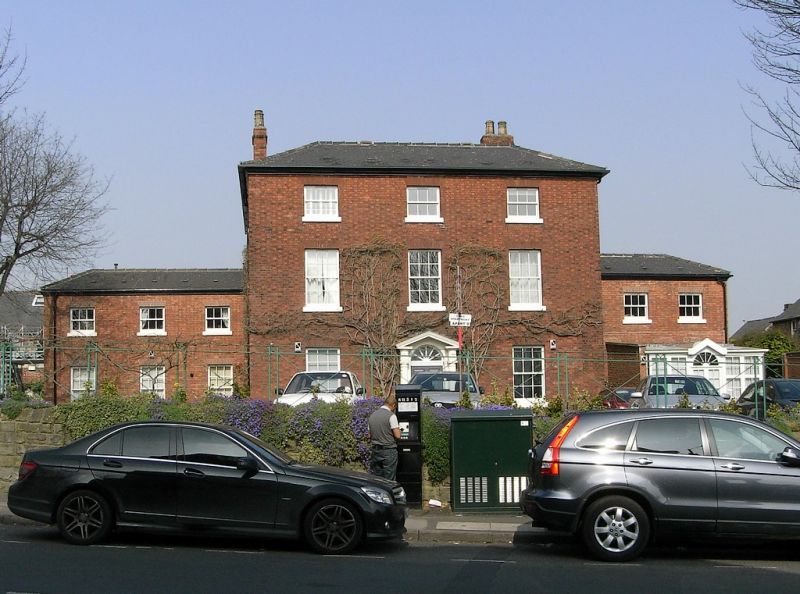 House and attached coach house, now an hotel. c1780 with
alterations and additions 1990. Brick with stone dressings and
hipped slate roofs with single ridge and single side wall
stacks.
House, to right, 3 storeys, 3 x 3 windows. Three 12 pane
sashes and above, three 6 pane sashes. Renewed central
doorcase with Doric columns, open pediment and fanlight,
flanked by single 12 pane sashes. Left return has similar
fenestration with blanks to the right. Central 6 panel door
with moulded surround and fanlight. On either side, a set back
wing, 2 storeys; 3 window range. Right wing is mainly covered
by a late C20 hipped conservatory with pedimented doorway in
the form of a Venetian window. Left wing has three 6 pane
sashes above and three 12 pane sashes below. To its left, a
late C20 glazed link building.
Former coach house, to left, 2 storeys; 3 window range. Three
6 pane sashes and below, 3 tall round-arched recesses with
imposts, containing a central doorway with overlight, flanked
by single 12 pane sashes.
INTERIOR not inspected.