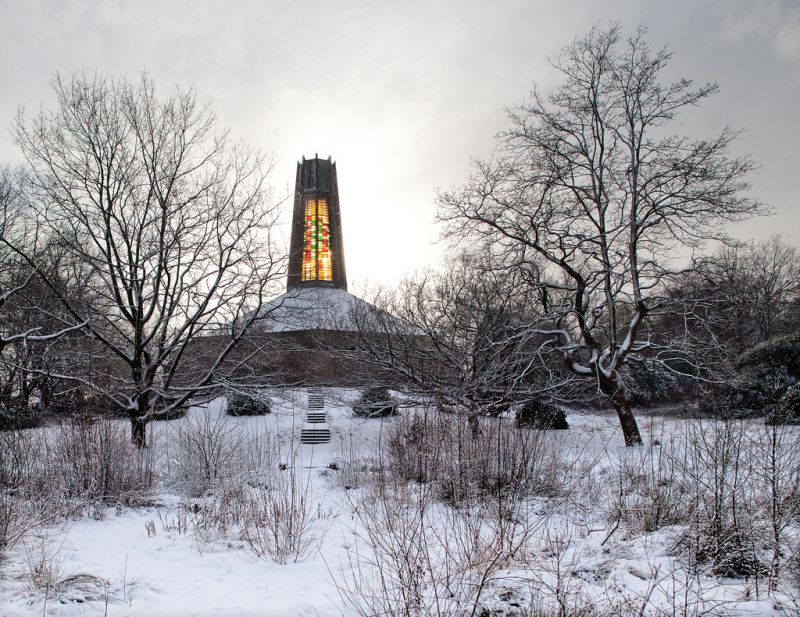 Chapel (now deconsecrated). 1964-65. Designed by Frederick Gibberd in association with Reynolds and Scott. Reinforced concrete frame with mauve-coloured concrete block infill. Ring beam exposed at eaves has counterweights for the roof at the corners and is of board-marked, unpainted reinforced concrete; lantern ribs are of exposed, unpainted precast concrete. Copper low-pitched roof; coloured glass to lantern. Narrow, horizontal band of glazing separates the wall from the ring beam above on each side, except the entrance side and the facet opposite. Octagonal plan with low, projecting lean-to entrance to one angle, reached by a pair of flying staircases. Central altar, raised on several steps. Projecting organ gallery with organ facing the entrance (and containing former sacristy behind). Polygonal side chapel with metal railings to right of this. Ceiling has double 'Y' shaped expressed framing, with white triangular infill panels between. Original benches have been removed. Coloured glass in lantern comprises simple rectangles of red, yellow and green and was designed by D Atkins. This centralised chapel reflects the influence of the Liturgical Movement and is related to Gibberd's Liverpool Cathedral in its design.
This building was formerly included in 12th Rochdale list. -