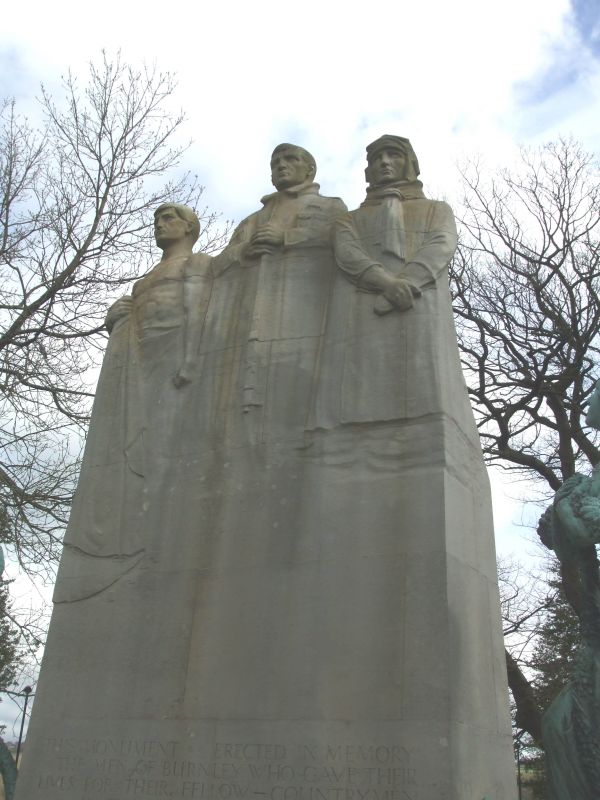 First World War memorial. Erected 1926 by the County Borough of Burnley. Designed by Walter Gilbert and Louis Weingartner. Founders and stonemasons HH Martyn & Co, Cheltenham.
MATERIALS: Portland stone cenotaph flanked by bronze figures, on a granite plinth.
DESCRIPTION: the memorial is located approximately 70m to the south-east of Towneley Hall, a country house of late-medieval origin whose gardens and pleasure grounds were formed largely in the mid- to late C18. It stands in a small triangular garden of remembrance enclosed by clipped hedges and surrounded by mature trees.
The memorial consists of a concave plinth of grey granite bearing a high sculpted wall of Portland stone flanked by bronze statues. The wall tapers slightly and gradually takes the form of three monumental figures which appear to emerge from it: a soldier in the centre wearing a great coat, clasping a military telescope, a seaman on the left with a naked torso and coat over his arm, and airman on the right with helmet, scarf and aviator goggles.
On each side is an over-lifesize statue of a woman: to the left, a mother in a shawl and headscarf, stooping to lay a wreath; by her side is a rosemary branch with a cricket bat and ball beneath; and to the right a wife or sister in a flowing gown looking upwards to the figures and cradling a large floral garland, with a large palm leaf at her feet.
The wall is inscribed at the foot: THIS MONUMENT WAS ERECTED IN MEMORY / OF THE MEN OF BURNLEY WHO GAVE THEIR / LIVES FOR THEIR FELLOW COUNTRYMEN / IN THE GREAT WAR 1914-1918 / Make them to be numbered with Thy Saints in Glory everlasting (a quotation from the Te Deum). Beneath is a further inscription: THIS MONUMENT STANDS ALSO IN HONOUR OF / THOSE WHO DIED FOR OUR FREEDOM 1939-1945. The rear is inscribed: THE SUM NECESSARY / FOR THE ERECTION OF THIS MEMORIAL / WAS BEQUEATHED BY CALEB THORNBER, J.P., / A FORMER MAYOR AND ALDERMAN OF THIS BOROUGH, / TO ENSURE THAT THE SACRIFICE COMMEMORATED / SHOULD EVER BE HELD IN GRATEFUL REMEMBRANCE. / THE GARDEN OF REMEMBRANCE WAS PROVIDED BY / THE TOWNSPEOPLE OF BURNLEY.
The memorial stands on a shallow stone platform within a circular paved enclosure bisected by a pathway, surrounded by low walls with terminal posts. Within the front section of the enclosure is a hemispherical pond.

The aftermath of the First World War saw an unprecedented wave of public commemoration with tens of thousands of memorials erected across the country.
Burnley War Memorial and the garden of remembrance were paid for by a bequest of £5,000 from Caleb Thornber, cotton manufacturer and former Mayor of Burnley, and funds raised by public subscription amounting to £900. It was unveiled on 12 December 1926 by the Earl of Derby and dedicated by the Bishop of Burnley, in front of a crowd of between 20,000 and 30,000 people.
Contemporary newspaper reports, quoting a letter from the sculptor, described the monument as intending ‘to express the emotion felt in the human heart at the ideals of those who have fallen in the Great War. The mother, overwhelmed in this emotion, places a wreath in memory of her son at the foot of the Cenotaph and, as she stoops, the Cenotaph shapes itself in her heart into the features of her son … The sculptor has endeavoured to conceive a memorial that shall breathe nothing of slaughter, but only of duty fulfilled and by fulfilment of duty, the comfort and thankfulness brought to those who remain’.
The memorial was renovated in 2007, including the cleaning and repointing of the monument, relaying of the paving around and restoration of the adjacent pond. Works were funded by English Heritage, the Wolfson Foundation and the War Memorials Trust.
Walter Henry Gilbert (1871-1946) was a designer and modeller, mainly in metalwork, who often worked in collaboration with the Swiss-born modeller Louis Weingartner (d1934) and latterly with his son Donald Gilbert. Born in Rugby, Gilbert studied at the Birmingham Municipal School of Art, and co-founded the internationally renowned Bromsgrove Guild of Applied Arts in 1898, under whose auspices he began his long and creative collaboration with Weingartner. Gilbert entered the firm of HH Martyn and Co. Ltd. of Cheltenham in 1918. Little is known about the career of Weingartner. He was from Lake Lucerne, and was a jeweller in the School of Art in Birmingham before moving to Bromsgrove in 1903. He returned to Switzerland in 1930 and died in 1934.
Gilbert and Weingartner’s catalogue of works includes the gates to Buckingham Palace and the Victoria Memorial under Sir Aston Webb; the reredos at Liverpool Anglican Cathedral under Sir Giles Gilbert Scott, and metalwork at the Masonic Temple, London, architects Ashley & Newman. They undertook a number of war memorials including those at Crewe, Liverpool News Exchange and West Derby, Liverpool, which also features life-size statuary of women honouring the fallen.

Burnley War Memorial, erected in 1926 to the design of Walter Gilbert and Louis Weingartner, is listed at Grade II* for the following principal reasons:
* Sculptural interest: a remarkable composition of considerable poignancy by the distinguished designers and sculptors Walter Gilbert and Louis Weingartner;
* Rarity: for the rare depiction of a mourning mother and for the inclusion of partial figures of servicemen;
* Historic interest: as an eloquent witness to the tragic impact of world events on the local community, and the sacrifices it made in the conflicts of the C20;
* Group value: the memorial stands within a Grade II-registered landscape in close proximity to Towneley Hall, listed at Grade I.