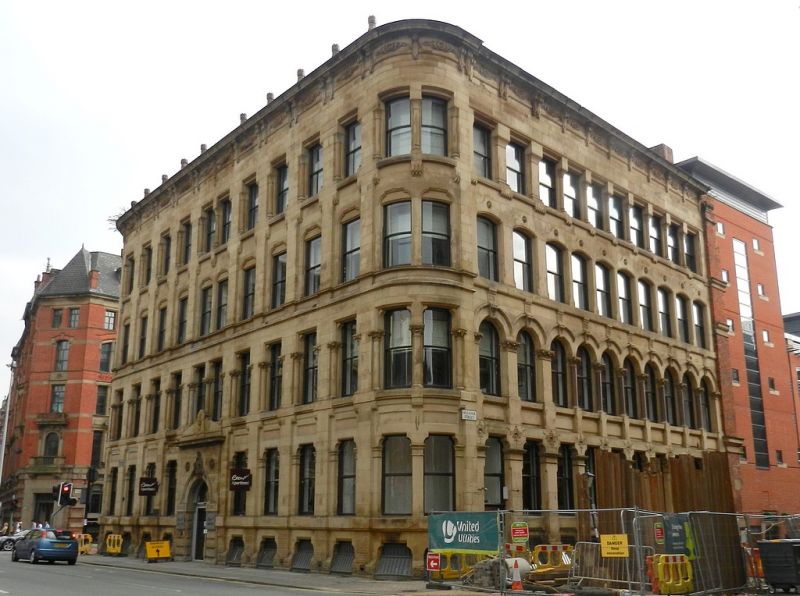 MANCHESTER,
PRINCESS STREET (south-west side),
No. 36

(Formerly listed as: No. 36 Manchester Chinese Chamber of Commerce)

Shipping warehouses, Manchester Chinese Chamber of
Commerce, Community Centre, etc when surveyed. Probably c.1870-80; altered.
Probably iron-framed, with cladding of sandstone ashlar (roof
not visible). Rectangular plan with curved corners, on island
site. Eclectic style with some Gothic details. Four storeys
over basement, ten windows plus the corners; symmetrical; band
dividing the upper and lower two floors, frieze with carved
ornament between pairs of brackets to cornice; central
round-headed doorway with rusticated jambs and moulded head
with carved cresting; sashed windows without glazing bars,
those at ground floor with shouldered heads and pilaster
jambs, those at first floor with stilted heads and set-in shafts
which have knobbly foliated caps, those at second floor with
shaped heads and those at third floor with set-in shafts. Return
sides have running arcaded fenestration, the windows at first
floor round-headed with foliated caps to the columns, those at
second floor segmental-headed, and those at third beyond the
third bay in a continuous band behind a screen of colonnettes.
Forms part of uninterrupted linear group of similar buildings
on this side of Princess Street.