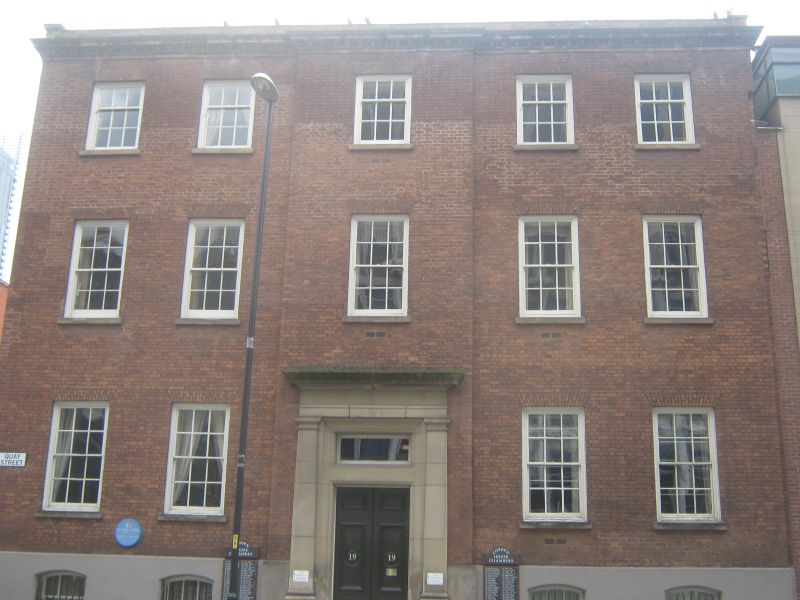 Town house, recently court. Mid C18 with later additions,
altered. Red brick in Flemish bond, with stucco plinth, roof
not visible. Deep rectangular plan formed by double-depth main
range with rear extensions. Three storeys over basement, a
symmetrical 5-bay facade with 1-bay centre breaking forwards
slightly; with plinth and modillioned eaves cornice. The
doorway in the centre has a late C19 pilastered doorcase with
frieze and cornice (replacing original raised pedimented
doorway approached by double flight of steps); the windows
have plain reveals, raised sills and flat-arched heads, with
12-pane sashes at ground and first floors and 9-pane sashes at
second floor; and the basement has segmental-headed windows.
Later wing attached at right-hand side, raised and altered in
C20. The 7-window left return wall (to Byrom Street) has,
inter alia, blind windows next to the front, a doorway and two
round-headed stair-windows at the junction with the back
extension, various sashed windows with glazing bars, and a
parapet ramped to conceal the gable. Interior not inspected.