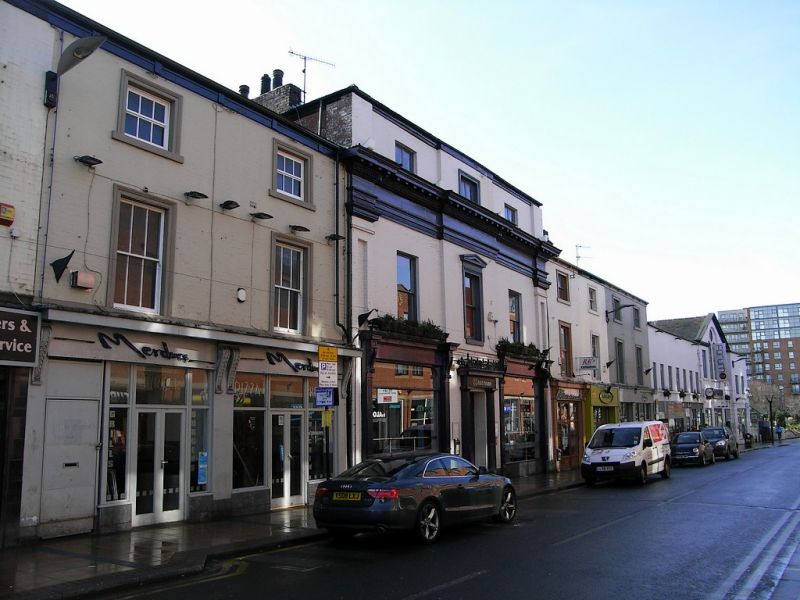 10 houses, now houses and shops. c1840 with late C19 and early
and late C20 alterations. Colourwashed brick with stucco
dressings and hipped slate roofs with 2 rendered side wall and
single ridge stacks.
Plinth, moulded wooden eaves, rounded corner to left. 3
storeys; 11 window range. Windows are mainly plain sashes with
moulded surrounds.
Higher 3 storey central block, 3 windows, has slightly
projecting centre, panelled angle pilasters, intermediate and
main cornices. Pedimented central window flanked by single
plain sashes and above, 3 smaller windows, the central one
with moulded surround. Below, central projecting doorcase with
cornice and cast-iron crest, flanked by single pane shop
windows with pilastered surrounds, cornices and toplights. On
either side, lower 4 window ranges with altered early C20
pilastered wooden shopfronts flanking the centre. The outer
shopfronts are late C20. Left corner has a 12 pane sash with a
6 pane sash above, and a C20 corner doorway. Left return has
first floor band and 3 windows on the upper floors, the right
ones blocked. Central doorcase with pilasters and cornice,
flanked to left by a 12 pane sash and to right by a C20 shop
window.
INTERIOR not inspected.