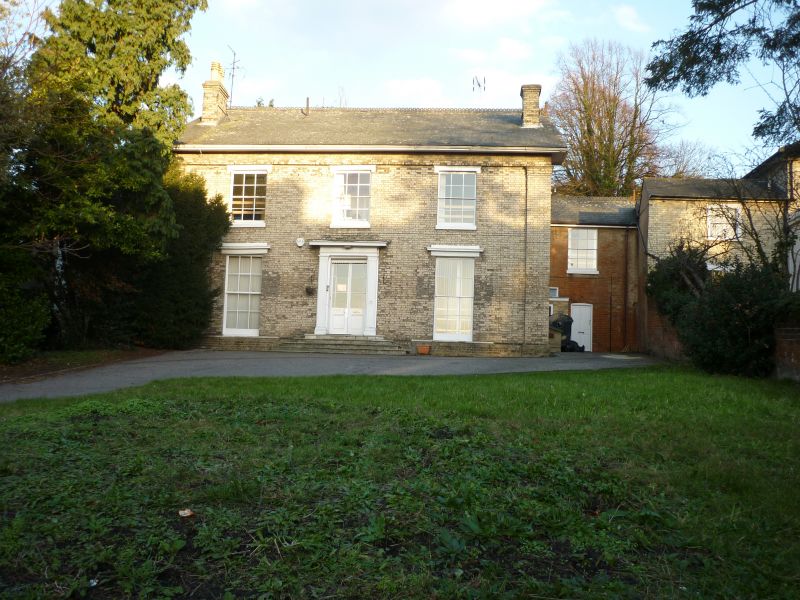 MATERIALS: The main front and chimneys are white brick, with red brick returns and extensions and a slate roof.

EXTERIOR: The main front is in a simple classical style, two storeys high and faced in white brick. The original block is 3 windows wide with brick pilasters to the ends of the elevation and a central half-glazed door with a timber doorcase and hood. The extension to the left is one window wide, slightly set back and with a corner pilaster of artificial stone. The windows are all 6-over-6 unhorned sashes, those to the ground floor being taller and with artificial stone lintels. The original block has a gabled roof with broad eaves and ridge cresting, and internal N and S gable-end chimney stacks on the front slope. The N front is of red brick and has a door with a classical timber doorcase and two external chimney stacks culminating in white brick chimneys.

INTERIOR: No. 160 has a fine curving open-string staircase with stick balusters (boarded over) and a scrolled handrail with an inlaid bull's eye. The two main ground-floor rooms have 6-panelled doors and simple early-mid C19 marble fireplaces with shield motifs. The staircase and landing have a c1900 lincrusta dado with Art Nouveau poppy-head motifs. No. 162 has a late Victorian open-string staircase with turned wooden balusters, and a cast iron fireplace with register grate on the first floor.

HISTORY: The main block of 160-162 Norwich Road was built in the early-mid C19. By 1862 it had been extended in similar style to the north, and subsidiary blocks were attached to the south and east. The house appears on a map of 1862 as a single dwelling. The 1884 Ordnance Survey map shows the rear garden as subdivided into two and there are two separate entrances at the front, indicating that by that date the house had been split into two properties. The 1904 OS map shows internal subdivision into two dwellings. No. 160 was converted into a hostel in the second half of the C20.

REASONS FOR DESIGNATION DECISION:
160 and 162 Norwich Road are designated at Grade II, for the following principal reasons:
* They were originally constructed as a single house in the early-mid C19, which was sympathetically extended in the mid C19
* The house was subdivided in the later C19 and the two properties are physically interconnected
* The house retains its early-mid C19 classical front, a fine curving staircase and principal rooms
* There is added interest in the later C19 conversion, with the creation of a new staircase
* They have Group Value with other listed buildings on Norwich Road including Nos. 156 and 158