A Grade I Listed Building in Holme Pierrepont, Nottinghamshire 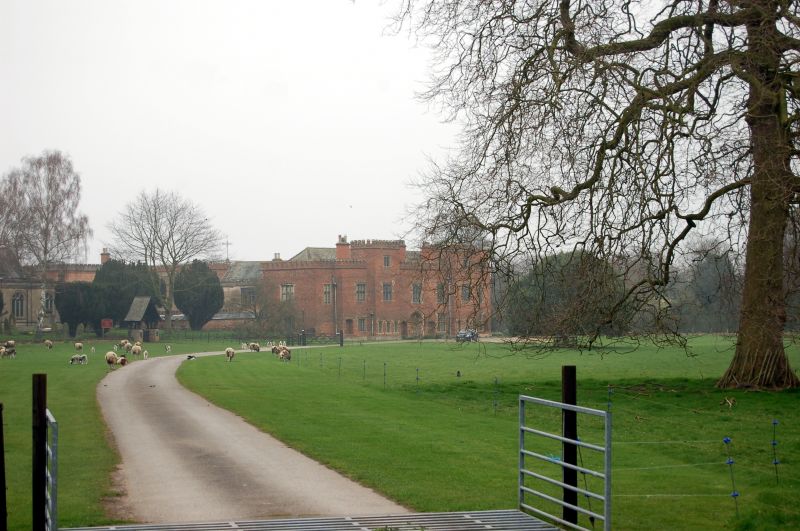 Large country house. Early C16 courtyard house built for the
Pierrepont family, Earls and Dukes of Kingston and Earls Manvers,
now truncated U-plan. The south range being the main surviving
part. Cl7 alterations including alterations to fenestration.
The north rebuilt by Robert Pierrepont, first Earl of Kingston in
1628, demolished in the 1730s and subsequently rebuilt in the
1870s. East side has mid C18 bays. c.1800 alterations. 1875
additions. Red brick, some blue brick chequering and diaper,
ashlar dressings, some render. Hipped slate roofs behind c.1800
embattled parapets which are coped with ashlar and have single
bands of ashlar and dogtooth extending under. Set on a plinth.
Suth/entrance front with 4 red brick stacks each with single band
of dogtooth. 2 storeys, 12 bays. The single bays fourth from
the right and left project and are two and a half storeys forming
turrets. Rendered chamfered 4 centred arch with inner similarly
double chamfered arched doorway and double C19 door. Either side
are single large 4 centred arched brick niches. Further right is
a single Cl7 ashlar tripartite glazing bar cross casement with
dripmould. Further right and left in the turrets are 3 small
glazing bar casements with ashlar surrounds and dripmoulds.
Further right is a single similar tripartite casement and
dripmould and a single similar smaller niche. The single bay on
the far right is set back and has no openings. Further left is a
single C19 ashlar mullion tripartite casement with dripmould and
a single depressed arched brick niche. The single bay on the far
left is set back and has no openings on this floor. Over are 6
Cl7 ashlar tripartite glazing bar cross casements with
dripmoulds, in the single bay on the far left is a single ashlar
glazing bar cross casement. In the turrets on the top floor are
single 2 light ashlar mullion windows with dripmoulds. Sides of
the turrets with a few blocked or glazed small narrow lights.
There are 2 tie plates. West/church front has a single early C16
window with 3 arched ashlar lights, flush ashlar quoinsurround
and hood mould. Above is a single Cl7 tripartite ashlar glazing
bar casement with dripmould. Irregular garden/east front of 15
bays. The left bays being early C16 with various alterations and
additions, those to the right being later Cl7, C18 and C19.
Various ashlar mullion and cross casements, some with dripmoulds,
some casements with arched ashlar lights. C19 bays with wooden
cross casements. The third bay from the left slightly projects
and has a partially concealed C16 arched garderobe window under
flat arch with panelled spandrels. The ninth and tenth bays from
the left project and have ashlar quoins being the base of the
cupola as drawn by Thoroton in 1676. Inner courtyard formed by
south, east and north wings. The west side with red brick and
render embattled wall with band of dogtooth under the
embattlements. The north side of the courtyard is completed by a
1875 single storey arcade, this continues to part of the east
range. Various doorways, ashlar glazing bar cross casements,
ashlar mullion casements and plain casements, some with
dripmoulds. Interior. South wing with lodgings to the ground
and first floors both with garderobes. Some lodgings entered via
4 centred arched doorways, some keyed for plaster. Lodgings
divided internally by close-studded partitions rising to the roof
pitch. Large chamfered beams. 2 fireplaces with moulded jambs
and 4 centred arches. First floor has chamber at east end with
exposed roof with cusped wind braces reputed to extend the length
of this front. East front with inserted Cl7 long gallery on the
first floor. 2 c.1610 ashlar fireplaces and 2 early Cl7 ashlar
arched doorways. Blocked early C16 ashlar window with 2 arched
ashlar lights. North end of this wing has fine late Cl7 dogleg
staircase inserted here early C18 with pierced and carved
foliated scroll balustrades. Newels carved with low reliefs,
some with finials. Closed strings with low relief carving.
Country Life, September 20, 1979.